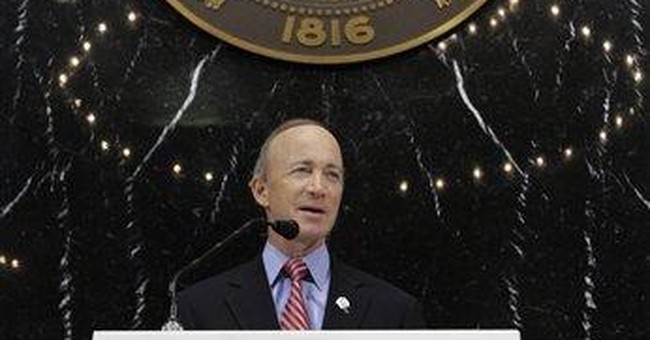 WASHINGTON -- "I would reinstate the Mexico City policy," Indiana Gov. Mitch Daniels told me, removing an uncertainty of his own creation. Promoting abortion with international family planning funds is one of "a thousand things we shouldn't be spending money on."

Yet days earlier, when asked if he would return to that family planning rule as president, Daniels had responded: "I don't know." It is a measure of Daniels' standing as a possible Republican candidate in 2012 that his answer caused a considerable stir. Social conservatives criticized his idea that a "truce" on divisive, culture war controversies might be required to deal with "survival issues" such as terrorism and debt.

Daniels' clarification on Mexico City shows his realism. But his continued insistence on the idea of a truce shows his stubbornness -- a defining characteristic. "If there were a WMD attack, death would come to straights and gays, pro-life and pro-choice," he told me. "If the country goes broke, it would ruin the American dream for everyone. We are in this together. Whatever our honest disagreements on other questions, might we set them aside long enough to do some very difficult things without which we will be a different, lesser country?"

This is the paradox of Mitch Daniels: He is a uniter with an apocalyptic message, a genial Jeremiah. "I start with a premise that not everyone agrees with -- that the republic is threatened as it has not been before, if you don't count the Soviet nuclear threat. ... It is the arithmetic of debt. If unaddressed, it makes national failure a certainty. Beyond some point, you can't come back."

Daniels' appeal is not ideological; it is mathematical. The passions aroused by ideology, in his view, hamper the ability of political adults to deal rationally with disturbing budget numbers. But if Daniels de-emphasizes ideology, he elevates moral virtues such as thrift, realism and humility. The vivid contrast to President Obama's expansive, undisciplined, expensive public ambitions has elevated Daniels to prominence.

This is not a pose. I was a colleague of Daniels when he was director of the Office of Management and Budget (OMB). It was his job to say "no" to splendid policy proposals, which he did with good-humored enthusiasm. Raining on parades was both a profession and a hobby.

There is a reason why OMB is not a typical steppingstone to high political office; the same reason that accountants generally don't become sex symbols. But Daniels became a highly successful Indiana governor, combining a motorcycle-driving, pork-tenderloin-eating populism with courageous budget cutting, a solid record of job creation and a reputation for competence. If responsibility and austerity are now sexy, Daniels and New Jersey Gov. Chris Christie are centerfolds.

When asked his political influences, Daniels cites Charles Murray, the author of "What It Means to Be a Libertarian." Daniels speaks of taxation as a form of coercion that can only be justified by narrow and necessary public purposes. But unlike, say, libertarian Kentucky Senate candidate Rand Paul, Daniels has actually run a state, forcing him to define government's necessary purposes in a more realistic manner. "Building excellent public infrastructure is an appropriate role for government," he explains, on the theory that it "enables the private sector to thrive. ... Maybe this makes me more of a Whig." It has certainly made him a tenacious reformer of government itself. Asked about his achievements in office, he notes that average wait times at the Bureau of Motor Vehicles have fallen to under nine minutes. "Actually," he says, "eight minutes, 16 seconds."

Daniels' rigorous, detail-oriented focus on economic issues has earned him a favorable buzz among conservative intellectuals and commentators. Social conservatives have been more skeptical, feeling their deepest commitments might be set aside for the duration of a culture war "truce." In fact, Daniels' pro-life record is strong. The main problem with his truce proposal is not its moderation but its naivete. Just how would avoiding fights on unrelated social issues make Democratic legislators more likely to vote for broad budget cuts and drastic entitlement reforms? Daniels admits, "No one may take the offer. ... But I'm not prepared to give up on the idea we can address this thing. If we can't -- well, the cynics were right. But somebody has to try."

It is difficult to imagine Daniels' rejection of uplift, ideology and activism appealing to the country at most times. But maybe, at this particular time, we are a nation in need of fewer messiahs and more OMB directors.