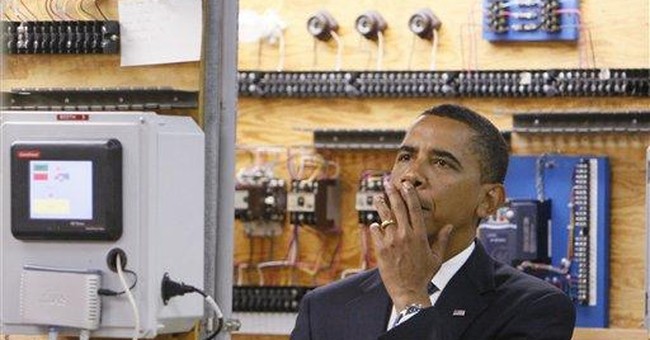 MARTINSVILLE, Va. -- This town of 15,000 in southwest Virginia is a good candidate for Anywhere, USA. There is bingo at the Elk's Lodge every Monday night. Bowling is a blood sport. But Martinsville also has an unwanted distinction -- a 20 percent unemployment rate, the highest in Virginia.

As the State of the Union approaches, the political class will turn en masse to the issue of unemployment. So I sat down with the objects of this attention -- a group of men studying at a Martinsville vocational training college. From them I learned: It is not easy to make a living while a way of life collapses around you.

In Martinsville's golden age of textile and furniture manufacturing, recalls Larry Jessee, 48, "If you were fired from one job, you could go to another immediately. Unless you wanted to take time for lunch." Most of those jobs have fled abroad. The work that remains is mainly in retail and fast food -- fields hurt by the current recession -- or in service industries such as health care and call centers.

So J.D. Privette, 56, and Walter E. Hamell, 59 -- friends and bowling buddies from their days at the table factory -- are training to be office medical assistants. Most medical jobs, however, involve a round-trip commute of 100 miles or more. "You can't afford to move, and no one will buy your house anyway," says Privette.

In this economic transition, men who have worked a lifetime with their hands are back in the classroom, not for personal advancement but for survival. It is "education out of desperation," says Christopher O'Dell, 37. The federal government, through trade adjustment assistance, pays for nine months of job retraining. But employers often demand a two-year associate degree. So the unemployed can incur thousands of dollars in education debt to secure a job making $13 or $14 an hour.

The struggle is more than economic. Tensions come, explains Hamell, "when the breadwinner is not winning the bread anymore." "The strains on your marriage, on your kids, that's a given," says O'Dell. And the dignity of a skilled trade is difficult to surrender. Jessee used to build custom furniture at home to make extra money. "But I was forced to sell my tools to get by."

Both genders suffer from unemployment. But this has been called a "mancession" with good reason. Because job losses have been concentrated in manufacturing and construction, about 75 percent have come among men. Brad Wilcox of the University of Virginia observes, "In recent years, college-educated men have done all right financially, but working-class men have not. They have seen their real wages fall and their rates of unemployment rise. Consequently, working-class men are less attractive to the women in their lives as husbands and providers, and they are less likely to see themselves as capable of being good husbands and providers."

In the long run, Wilcox predicts this will undercut marriage in working-class communities and leave men more rootless and socially disconnected.

In the short run, these strains cause political resentment. My small group had critical things to say about all politicians, whom they regard as self-serving and indifferent to their needs. "How is a congressman," said Privette, "going to get me a job?"

But Martinsville's congressman, Tom Perriello -- a sharp, young Democrat elected along with President Obama in 2008 -- seems to understand the challenge. "Both parties," he told me, "have been tied to the financial sector, instead of emphasizing economic development. Two-thirds of job growth comes from small and medium-sized businesses." But people need to be prepared by vocational training for the jobs that result from economic growth.

These two priorities -- a more conservative emphasis on policies that encourage business expansion and a more liberal emphasis on generous retraining programs -- are a good place for the coming economic debate to start. The need, as Robert F. Kennedy put it, is "dignified employment at decent pay; the kind of employment that lets a man say to his community, to his family, to his country, and most important, to himself, 'I helped to build this country. I am a participant in its great public ventures. I am a man.'"