The Driving Desire for Defeat 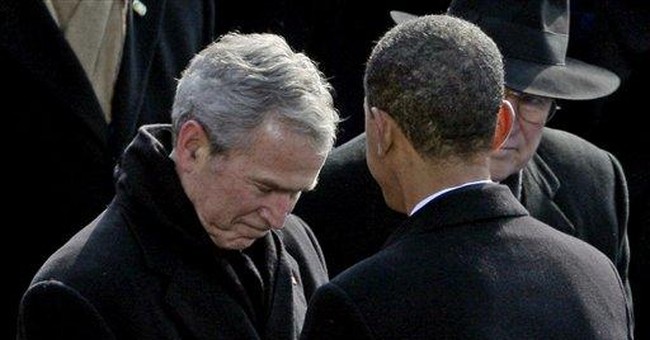 WASHINGTON -- Of the two main American political parties, Republicans are now clearly distinguished by their driving desire to lose. Every faction seems determined to rule the kingdom of irrelevance.

Witness the reaction to the National Council for a New America -- an anodyne "listening tour" by Republican officials recently kicked off at a pizza parlor in Northern Virginia. Social conservatives attacked this forum on education and the economy for the offense of not being a forum on abortion and the traditional family. Neo-Reaganites searched the transcript for nonexistent slights: How dare former Florida Gov. Jeb Bush criticize "nostalgia" for the "good old days"? Why didn't he just spit on Ronald Reagan's grave? Other conservatives criticized the very idea of a listening tour, asking, "What's to hear?"

During a recent conversation, Bush described himself as "dumfounded by the reaction." He added: "I don't think listening is a weakness. People are yearning to be heard. Perhaps we should begin with a little humility."

There is much for Republicans to be humble about. The party, says Bush, faces "dramatically changing demographics, especially Hispanics in swing states," the "alienation of young voters" and an unprecedented drop in support among college graduates.

"Trying to be all things to all people isn't going to work," Bush contends. The goal is "not to redefine our beliefs, but to recognize challenges and adapt," particularly on the issues of national security, health care, education, the economy and the environment. Republicans need to "focus on creating policies relevant to today -- not things relevant 20, 30 or 40 years ago."

Jeb Bush insists that this focus on creative policy can be unifying because "conservatives have more in common than they disagree on." And the Republican Party has been unified in opposition to President Obama's disturbing accumulation of federal debt and power. But on other issues, it seems to me that Republicans are likely to pass through a series of wrenching debates before they arrive at "policies relevant to today."

Take the environment. For many Americans, especially the young, concern about carbon emissions and climate disruption is no longer a conviction; it is a value. It is possible that climate change skeptics -- the dominant Republican voices -- have uncovered a vast scientific delusion, like the belief in phlogiston or phrenology. But given the compelling evidence from glaciology, botany and marine biology, this seems unlikely.

Republicans have distinctive contributions to make on climate policy. They might support a carbon tax instead of a cumbersome cap-and-trade system. They should insist that all revenues gained from a carbon tax or the sale of pollution permits go back to the American people in lower taxes. But the main policy choice is binary: Should a cost be imposed on carbon emissions? If Republicans generally say no, they will not be viewed as belonging to an environmental party.

A similar argument can be made concerning health care. Obamacare, in its nascent form, seems deeply flawed -- using a system of fines, new bureaucracies and subsides to push workers toward a plan resembling Medicare. Republicans have long supported alternatives that subsidize the individual ownership of private health insurance. But these proposals generally have been incremental, poorly explained and largely ignored.

A credible Republican alternative would employ a more generous refundable tax credit that enables the working poor to purchase basic health insurance -- essentially creating an entitlement to health care through the private insurance system. This is perhaps the only real alternative to the slow socialization of American health care. It is also costly.

Or consider immigration. Immigrants hold diverse political views, but they also make a determination about parties and politicians: Do they welcome us? The answer from Republicans has often been equivocal. Some of this is a matter of tone. But it is difficult to imagine a remedy to this impression of resentment without Republican support for immigration reform that includes a legal status for temporary workers and a realistic path to citizenship.

Each of these policies -- carbon restrictions, universal health insurance and immigration reform -- could eventually be important to the Republican recovery. But would a candidate carrying these ideas transform the Republican Party, or be destroyed by it? The hostile reaction to the pizza parlor putsch provides one answer.

But this is a snapshot, not a prophecy. As the years pass, the kingdom of irrelevance seems less and less pleasant, even to its rulers. Policy shifts that seem incredible become inevitable. This is how a party prepares to win.