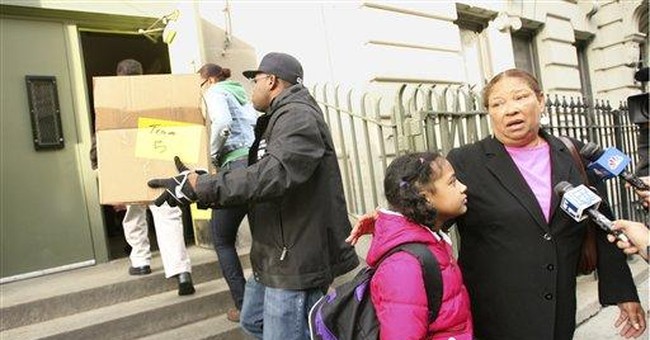 WASHINGTON -- As I was waiting for the results of my AIDS test, the health lecture from my counselor Anthony was calm, explicit and, um, informative. The five bodily fluids that can transmit the HIV virus. The proper way to open a condom package to avoid rips (I did it all wrong). Certain uses for Saran Wrap not specified by the manufacturer.

An AIDS clinic in Washington, D.C. -- a new ground zero in the American AIDS crisis -- is no place for the squeamish.

The test itself looks like a pregnancy test, in its small, white, plastic momentousness. The swab at the end is run across the gum line; no blood is drawn. The results take about 20 minutes and are 99.1 percent accurate.

I was visiting Unity Health Care in Ward 7, an outpost of tidy medical professionalism in a poor section of the city. Here the talk of epidemics has nothing to do with swine flu. The Centers for Disease Control and Prevention describes a health epidemic as "severe" when more than 1 percent of people in a geographic area are infected. The HIV infection rate in Ward 7 is at least 2.4 percent -- higher than the national rate in Ethiopia, Ghana or Burundi. Among 40- to 49-year-olds in the District of Columbia, 7.2 percent are HIV-positive.

If 7.2 percent of all 40-somethings in America were infected with anything, there would be no other topic of national discussion -- every alarm would ring, every clock would stop. In this case, the victims are geographically isolated, often poor, and thus largely invisible.

Unity Health Care provides services from dermatology to ophthalmology; due to stigma, few would come to a clinic that deals exclusively with HIV/AIDS. But Dr. Gebeyehu Teferi, the medical director of HIV services, sees the AIDS crisis in every form -- intravenous drug users, prostitutes, men who have sex with men, and middle-aged women shocked by their diagnosis and the infidelity of their partners. (Among African-Americans in the District, the single largest method of transmission is heterosexual sex.) "There are late, full-blown cases coming into the emergency room," says Teferi. "People who say, 'I don't use drugs, or even drink.' They forget about the sexual part of it."

The staff at Unity recommends three changes to confront the epidemic. First, AIDS needs to be discussed at home. In prevention, there is no substitute for uncomfortable frankness. Neither self-interest nor morality is aided by ignorance.

Second, they argue for the "routinization" of AIDS within the range of infectious diseases. Because of its politically charged history, HIV infection is treated differently. A positive syphilis test, for example, is reported directly from the medical lab to the local Department of Health. "If it is syphilis," says Teferi, "there is a knock on their door to get them into treatment. If it is HIV, no one talks to them."

Third, testing needs to be broader. At Unity, they refer to HIV status as the "fifth vital sign" (after temperature, heart rate, blood pressure and respiratory rate). People who know their positive status are more likely to change their behavior and get treatment for opportunistic infections. Early treatment can also reduce the virus to a nearly undetectable level in the body, drastically lowering transmission from mothers to children during childbirth and between discordant couples (partners where one is HIV-positive and one is HIV-negative).

This raises an interesting prospect supported by Dr. Anthony Fauci, the director of the National Institute of Allergy and Infectious Diseases. Developing an AIDS vaccine, he says, remains unlikely in the short term. But what if we were to begin treatment with AIDS drugs as soon as someone is diagnosed with HIV instead of waiting, as we now do, until later stages? Lower viral loads would inhibit transmission. "Treatment," he says, "would be prevention." According to the mathematical model Fauci has reviewed, the testing and treatment of 90 percent of those at risk could eventually eradicate -- not just control, but eradicate -- the disease in a geographic area.

The obstacles are immense. Would people take AIDS drugs when they are still feeling well? Would any community help promote testing on such a massive scale? Would it be cost-effective?

But even the attempt would have many good effects. It would encourage early care and effective prevention. And if everyone were tested, the stigma surrounding AIDS testing might decrease. It takes only 20 minutes.