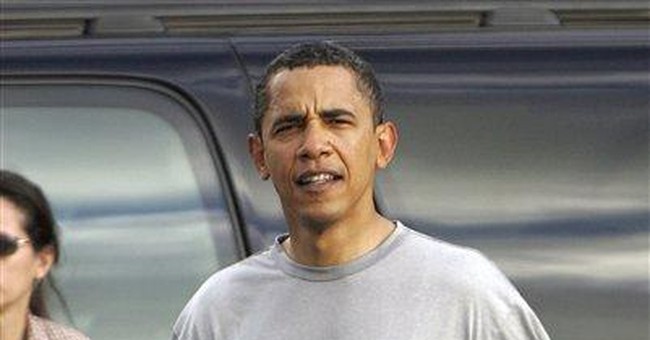 WASHINGTON -- No year that saw a 778-point single-day stock market drop, the price of oil fluctuate by more than $100 a barrel and the death of Irvine Robbins -- the inventor of Jamoca Almond Fudge ice cream -- can be called good. But the election of Barack Obama as president made 2008 important.

During a long political season, Obama was both charming and charmed -- favored by the gods of economic catastrophe, who turned a tight election into a Democratic mandate. A neophyte senator managed to combine inspiration with organization, progressive ideals with a conservative temperament, and a message of change with a manner of reassurance. As evidence, the "team of rivals" in his proposed Cabinet seems more like a team of professionals.

So far, Obama is attempting to be a unifying national figure -- in spite of his most insufferable supporters. "Indeed," explains Joe Klein of Time magazine, "as the weeks have passed since the election, I've felt -- as an urban creature myself -- less restricted, less defensive. Empowered, almost. Is it possible that, as a nation, we're shedding our childlike, rural innocence and becoming more mature, urban, urbane ... dare I say it, sophisticated?"

Indeed. Is it possible for a pundit to be more like a college freshman who has just discovered the pleasures of wine, co-ed dorms and Nietzsche -- shedding the primitivism of his parents and becoming, dare I say it, an annoying adolescent?

Obama does not need the service of nymphomaniacs on his honeymoon. In 2009, he will require sober supporters -- and loyal critics -- to get through challenges that will not yield to charm.

First, a nuclear Iran seems both inevitable and unacceptable. For the Iranian government -- representing a proud culture and resenting near, nuclear neighbors such as Pakistan -- the acquisition of nuclear capabilities seems reasonable. For any American administration -- fearful of Iran's terrorist connections, of the domination of a vital region by a radical government and of the prospect of a Middle East nuclear arms race -- Iranian nuclear capabilities are a strategic nightmare.

Given the momentum of his campaign promises, Obama seems likely to offer a grand bargain to Iran -- economic engagement, security assurances and nuclear fuel for civilian uses in exchange for Iranian abandonment of the nuclear enrichment cycle and ending support for anti-American (and anti-Israeli) terrorists and militias. In the current extremity, this may be worth a try -- if only to tighten the international isolation of Iran's regime.

But the regime will likely reject such a deal. Though Iran has suffered from sanctions and the falling price of oil, it is difficult to regard its current strategy in the Middle East as a failure. Iran has engaged in what former CIA analyst Robert Baer calls "imperialism via proxy" -- arming and organizing effective guerilla groups in Lebanon, Gaza and Iraq. Its nuclear ambitions seem to be a unifying national commitment instead of an internally controversial one. And the abandonment of anti-Americanism would mean dismantling a main ideological pillar of the Iranian revolution.

A failed grand bargain would come with a price: It would dramatically raise expectations of action. By refusing a generous offer, Iranian intentions would be completely unveiled, American influence in the Middle East would be challenged -- and President Obama would face one of the most difficult military choices of modern times.

Second, Obama has promised an escalation of the war in Afghanistan -- but its outcome is far from certain. That escalation, in fact, has already begun -- currently measured in thousands of troops and likely to rise even more dramatically by next summer.

In Afghanistan, we confront a problem once familiar in Iraq -- American troops can clear the enemy, but not effectively hold territory or build an economic alternative to resentment and radicalism. But Afghanistan offers complications beyond the Iraqi precedent. Our Pakistani partners are incapable, reluctant and even compromised in their fight against the Taliban and al-Qaeda in their country. Our NATO allies in Afghanistan seem exhausted by their limited contributions. And Afghanistan itself, unlike Iraq, has little history of centralized control by anyone.

Though he ran as a peace candidate, Obama will be a war president. In these likely challenges of 2009, he deserves more than an infatuation that turns to disillusionment. He will need a broad commitment to difficult national goals involving considerable risk and sacrifice -- public patience and fortitude that were not always evident during the longest days of the Iraq conflict.