The Irony of Obama 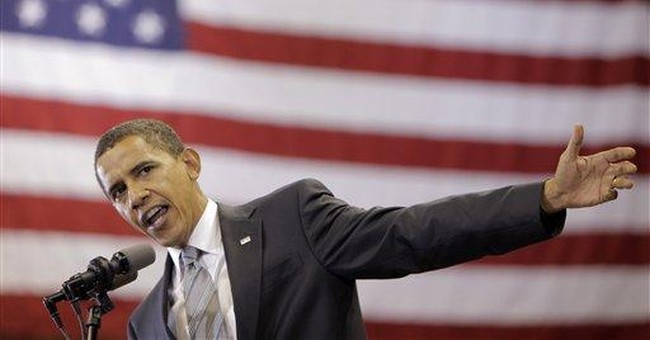 WASHINGTON -- Less than two weeks away from his likely election as president, the debate continues about the nature of Barack Obama's deepest political beliefs. Is he -- as some liberals quietly hope and many conservatives loudly accuse -- a closet radical? Or is he a more subtle and moderate political figure who embraced, then discarded, the leftism of south Chicago in pursuit of a restless ambition? There is evidence for both views.

For those in the first camp, Obama is the associate of Ayers, the acolyte of Alinsky, the friend of Pfleger, the disciple of Wright. The ACORN, in this argument, doesn't fall far from the tree.

It is undeniable that Obama's record in the Illinois Legislature was conventionally liberal on crime and spending, and radical on abortion. During his brief U.S. Senate career, he has carefully avoided offending liberal constituencies. As a presidential candidate, Obama has felt no need to develop a third-way alternative to the Gore-Kerry agenda; his convention speech, to the contrary, was the Platonic form of that approach. And on the testimony of his unguarded moments, Obama has an elitist disdain for bitter, God-clinging conservatives and intends to "spread the wealth."

So isn't the case clear and closed? Not really. From his days at Harvard Law School, Obama has combined progressive political views with instincts of reconciliation. As a state legislator, his social welfare proposals were often small and noncontroversial enough to gain Republican support. He has never joined the anti-religious culture war of secular liberalism. Even in the speech announcing his opposition to the Iraq War, Obama was careful to point out he is not a pacifist.

When the time came to embrace gun ownership, terrorist wiretaps and the death penalty, Obama adapted with little apparent struggle. When the moment arrived to throw his Chicago associates under the campaign bus, the vehicle did not slow much for sentiment.

This might seem like cynicism, but Obama does not appear to view himself as a lapsed radical. He sees himself as the reconciler of opposites, the seer of merit on both sides, the transcender of stale debates. He is the racial healer who understands racial anger. The peace candidate who prefers a more aggressive war in Afghanistan and Pakistan. The outsider who surrounds himself with reassuring establishment figures.

During the presidential debates, Obama reinforced this image as an analyst not an ideologue -- the University of Chicago professor not the leftist community organizer. His entire manner douses inflammatory charges of extremism.

So conservatives are left with what might be called the Niebuhrian hope. One of Obama's favorite philosophers is Reinhold Niebuhr (though I imagine Niebuhr's favorite philosopher might have been the same as George W. Bush's). Niebuhr's thought is complex, but he is properly known as the theologian of conflicted humility -- for his belief that human nature is flawed and fallible even, or especially, in the pursuit of good causes. Man, Niebuhr said, is an "ironic creature" because "he forgets that he is not simply a creator but also a creature."

All things being equal, conservatives prefer liberals to be ironic and self-questioning rather than messianic and filled with gleaming-eyed intensity. In Obama's case, this humility might translate into an administration focused on achievable goals, run by seasoned, reasonable professionals (such as Tom Daschle and Dennis Ross), reaching out to Republicans in the new Cabinet, and avoiding culture war battles when possible.

But there is a reason we don't generally praise Niebuhrian soldiers, Niebuhrian policemen -- or Niebuhrian presidents. Sometimes events call for courage and clarity, not a sense of irony. And courage may be required to confront a genuinely radical and passionate Democratic Congress.

Following an electoral victory, Obama is likely to face a massive challenge: The least responsible, least respected, least popular political institution in America -- the Democratic-led Congress -- would also be the most emboldened. Democratic leaders with large majorities would be pushed by conviction and hubris, and pressured by Democratic constituencies, toward divisive measures that punish and alienate businesses, seek backward-looking political vengeance and impose cultural liberalism. This predictable story of overreach, backlash and bitterness easily could destroy Obama's presidency, even before his first achievements -- unless he can suddenly find the ability to shape, tame, even fight, the self-destructive tendencies of his own party.

A closet radical would not even resist. A conflicted Niebuhrian, with ambitions of reconciliation, might make the attempt. But maybe only a passionate, committed, courageous moderate could succeed.