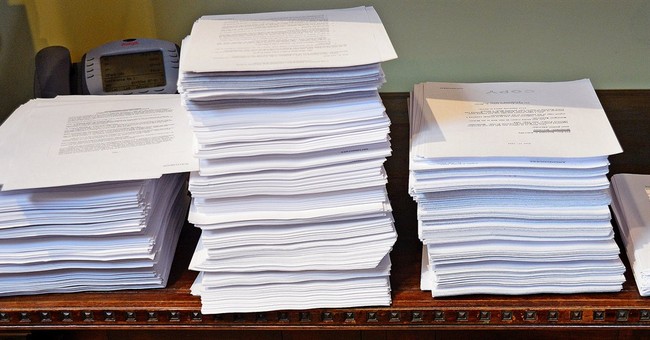 Last week, President Obama approved a one-year, unilateral (and thus illegal) repeal of ObamaCare’s requirements that the federal government verify the incomes and insurance options of people applying for the law’s new subsidies—a move that eviscerated the law’s anti-fraud protections. Rescinding anti-fraud protections is nothing new (or defensible). There is a very powerful fraud lobby in Washington, D.C. Normally, such steps just mean an increase in fraudulent and improper payments from the federal treasury, and a few more ignored reports from the Government Accountability Office and HHS Inspector General. Obama’s move, however, is so sweeping that he effectively expanded the eligibility criteria for ObamaCare’s new entitlements without so much as consulting Congress. Indeed, the law Obama is implementing did not and could not have passed Congress.

Barack Obama wasn’t always part of the health-care fraud lobby. Oh, no: time was, he railed against health care fraud. When he pleaded for his health care plan before a joint session of Congress in 2009, he promised that with his plan:

We will root out the waste and fraud and abuse in our Medicare program that doesn’t make our seniors any healthier…I’ve appointed a proven and aggressive inspector general to ferret out any and all cases of waste and fraud.

Any and all cases! So inspiring. And in his final push for ObamaCare’s passage, he promised the law would reduce fraud and improper payments. Here are excerpts from a strident speech he gave in Missouri on March 10, 2010:

I believe that in everything government does, we’ve got a special responsibility to be wise stewards about how Americans’ hard-earned tax dollars are spent. And I know you agree with that, too. Doesn’t matter whether you’re a Democrat or a Republican, you don’t like seeing your money wasted — or an independent, don’t like seeing your money wasted.

Washington is a place where tax dollars are often treated like Monopoly money — they’re bartered and traded, and they’re divvied up among lobbyists and special interests, and where waste — even billions of dollars of waste — is accepted as the price of doing business…

The health care system has billions of dollars that should go to patient care and they’re lost each and every year to fraud, to abuse, to massive subsidies that line the pockets of the insurance industry.

Let me just give you one example — this is a long recognized but long tolerated problem called “improper payments.” That’s what they call them. Washington always has a name for these things. “Improper payments.” And as is often the case in Washington, the more innocuous the name, the more worried you should be. So these are payments mostly made through Medicare and Medicaid that are sent to the wrong person, sent for the wrong reason, sent in the wrong amount. Sometimes they’re innocent errors. Sometimes they’re because nobody is bothering to check to see where the money is going and they’re abused by scam artists and fly-by-night operations…

Now, for the past few years, there has actually been a pilot program that uses a system of tough audits to recover some of this lost money. And even though these audits, they were just operating mainly in three states, they already found a billion dollars in improper payments. So these results were both disturbing and encouraging. They’re disturbing because it shows you how much waste there is out there in the health care system. But it’s encouraging because we can do something about it.

So earlier today, with [U.S. Sen.] Claire [McCaskill, D-Mo.] looking over my shoulder — one of our auditors-in-chief — I signed an order calling on all federal agencies to launch these kinds of audits all across the country. All across the country. (Applause.) So agencies would hire auditors to scour the books, go through things line by line. Auditors are paid based on how many abuses or errors they uncover. So it’s a win-win. The auditor, if they do a good job they get a small percentage as a reward. And the taxpayer wins by getting huge sums of money that would otherwise be lost that we can then spend to provide care to people who really need it, or we can use to reduce the deficit.

Now, through this effort, we expect to more than double the amounts we would’ve otherwise recovered — a couple of billion dollars over the next few years. And I’m announcing my support for the Improper Payments Elimination and Recovery Act — that’s a mouthful — but this is a bipartisan bill — (applause) — is a bipartisan bill to expand our ability to do these audits, so we can prevent even more fraud and abuse and waste.

Now, the reason I’m bringing all this stuff up is because there’s been a lot of talk about health care lately. And look, I’ll be honest, a lot of people, they’re confused, they’re saying, well, how can you help people get insurance who don’t have it without it adding to our deficit? It’s a legitimate question.

Well, the reason is, is because so much of the money currently in our health care system is being misspent.

Barack Obama used to oppose health care fraud—up until the moment that opposing fraud conflicted with his goal of preserving ObamaCare.

And why not? It’s just other people’s money.