Michael Brown
|
Posted: Oct 06, 2018 12:01 AM
Share   Tweet
The opinions expressed by columnists are their own and do not necessarily represent the views of Townhall.com. 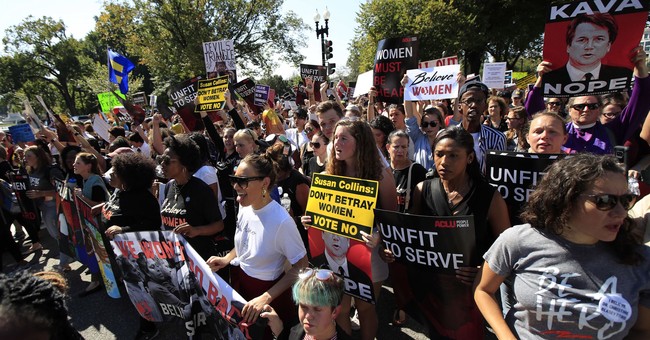 Never in our lifetimes has America been so divided, and we are in danger of tearing ourselves at the seams. What’s more, it looks like things will only get worse – much worse – in the days ahead.

An article on the Study Finds website states that, “It may not be so hard to believe during this murky political landscape, but a new study finds the divide between Democrats and Republicans is the worst it’s ever been, more so than many people may even think.

“The research, conducted by Zachary Neal, an associate professor of psychology and global urban studies at Michigan State University, is among the first to measure polarization not only by examining the frequency of parties working together, but also by demonstrating how they’ve grown more distant than any other time in modern history.”

With the confirmation of Justice Kavanaugh, followed by the midterm elections, that polarization will only increase in the days ahead. That, in turn, will lead to the stiffening of each opposition position, as the left attacks the right and the right attacks the left, confirming each side’s worst suspicions about the other: “You are even worse than I thought you were!”

The pro-life movement will be freshly energized with another conservative jurist on the Supreme Court and with a pro-life president at the helm. The pro-abortion movement will be freshly energized as well – not to mention utterly outraged – launching an all-out assault on conservatives and pro-lifers. And this is just one aspect of today’s massive cultural and political divide.

According to Prof. Neal, “What I’ve found is that polarization has been steadily getting worse since the early 1970s. Today, we’ve hit the ceiling on polarization.”

The early 1970s reflected the turbulence of the counterculture revolution, a time of massive division between the young and the old in America.

The older generation was shouting, “America, love it or leave it!” The younger generation responded by raising two fingers for the peace sign, saying, “Make love, not war!”

Since then, those divisions have worked themselves out along sociological lines more than generational lines. And over the decades, the lines have been drawn more clearly.

More recently, President Obama had a chance to be a unifying leader as our nation’s first black president. Unfortunately, he often chose the way of identity politics, thereby enflaming a spirit of division in our midst.

President Trump, by appealing to the dissatisfied state of many Americans, has rallied tens of millions. But in so doing, he has poured salt in our festering wounds, deepening rather than bridging those divides.

As for Congress, it is totally split along party lines. This is the last group in America who can bring unity, at least for the moment.

As for the Church, we seem as divided as the rest of the society and hardly more civil.

Who, then, can bring healing to our nation’s wounds? Who can be peacemakers rather than troublemakers?

I’ve argued in the past that followers of Jesus are uniquely equipped to lead the way, given our emphasis on the message of redemption (see here and here).

But let’s be real. Most Bible-based followers of Jesus hold to strongly conservative moral and social views.

By and large, we are strongly pro-life. We are strongly pro-family (starting with marriage as God intended it, namely one man and one woman). We oppose LGBT activism. And we are not about to change, since these beliefs are sacred to us.

How, then, can we bring healing when we are part of the division?

I, for one, don’t plan to compromise a single one of my convictions, nor am I expecting LGBT activists or pro-abortionists to simply abandon their cause.

And I do not believe that the solution for our country is for everyone to meet in the middle, where we’ll live happily ever after.

But what I am saying is this. Very few people thrive on hostility and anger. Most of us would prefer to get along with our co-workers and neighbors and family members. So, why don’t we take the initiative to be peacemakers and bridge builders and reach out to our ideological opponents?

You could start a conversation by saying, “Look, we’re poles apart politically and culturally, but we don’t have to fight and be nasty. Would you mind telling me a little bit about yourself? About your family? I’d like to get to you know as a fellow human being and not just as a supporter of Hillary Clinton (or Donald Trump) or an opponent of Brett Kavanaugh.

“Maybe we could be friendly co-workers (or neighbors) despite our differences. After all, just because we have such strong differences doesn’t mean we have to hate each other. And if I can help you in any way, I’m here.”

Not everyone will accept our offer. Some will hate us simply because we hold passionately to our views. Others will reject us all the more. The better they get to know us, the more they will despise us.

But bridges can be built, like the bridge built between myself and the gay rabbi who performed my mother’s funeral.

There was also a bridge built between leaders in my home congregation and the gay man (and his partner) who led a protest against us.

So, while we pray for a massive national awakening and while we ask God to have mercy on our land, let’s build some bridges along the way. When the fissures are this deep, every little bit helps.