Michael Brown
|
Posted: Oct 04, 2018 12:01 AM
Share   Tweet
The opinions expressed by columnists are their own and do not necessarily represent the views of Townhall.com. 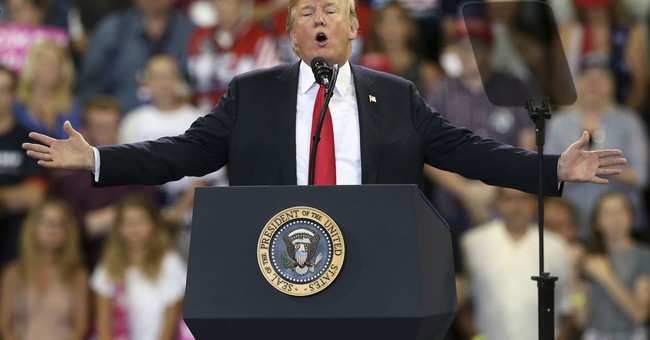 In one short moment during his Tuesday night speech in Mississippi, President Trump energized his base and enraged his opposition. He reminded us why so many voted for him and why so many could never vote for him. He was Trump the beloved and Trump the despised.

What did he do to receive such radically polar responses? He mocked Prof. Christine Blasey Ford’s testimony during the Kavanaugh hearings.

His audience – yet another massive crowd for a political rally – loved it.

At last a president who speaks for us! At last someone who’s not afraid to say what we’re all thinking! At last a man with enough guts to take on the crazy Democrats and the unhinged media! At last a leader who doesn’t have to be politically correct!

Many others, including some moderates in his own party, were aghast. (For the record, Sarah Sanders claimed that the president was not mocking Ford. He was simply stating facts.)

Senator Jeff Flake said, “There’s no time and no place for remarks like that. To discuss something this sensitive at a political rally is just not right. It’s just not right. I wish he hadn’t done it. I just say it’s kind of appalling.”

And Senator Lisa Murkowski stated that his comments “mocking Dr. Ford were wholly inappropriate and, in my view, unacceptable.”

She characterized his rallies as “tribal circuses” and wrote that, “They've become altar calls at the foot of their faux messiah where common decency and honesty have been thrown to the wayside. This is what the Republican Party has become in the era of Trump. As part of their Faustian bargain, Republicans continue to stand by as craven enablers of this President. Shame on them.”

This is Donald Trump in action. He is as polarizing as he is popular, revered by his followers and repulsive to his opponents. There is no middle ground when it comes to our president.

But what if Dr. Ford was lying through her teeth? What if Trump had access to further information from the FBI report that indicated to him that she was not credible? What if she was a political pawn, part of a scurrilous effort to drag down a good man? What if she was willfully used to destroy Brett Kavanaugh’s reputation, family, and career?

This could all be true (at this point, we simply do not know for sure), in which case she could go to jail for years. (My own guess is that, if her testimony is not accurate, then she is misremembering rather than lying.) But is it right to mock her at a rally?

Trump loyalists would doubtless say, “Yes! Absolutely! This is his bully pulpit, and rats like this need to be exposed!”

Some would even say to me – despite my being a supporter of the president who would vote for him again today – “It’s weaklings like you who are the problem. It’s people like you who think always have to be nice. That’s why we’re in the mess we’re in.”

But it is here that the Always Trumpers miss the point: The issue for me is not the president being nice.

To be sure, I appreciate it when he acts “presidentially” while I cringe at his words at their ugliest.

But the issue for me is the larger strategy, the issue of winning the bigger war.

Without a doubt, if Prof. Ford is lying, that is terribly ugly, and she deserves to pay the price. She has committed a punishable crime and she has participated in a heinous act.

But by doing what he did in his speech, the president alienated many on the fence, thereby making it more difficult for them to vote for candidates in swing states, thereby shooting himself in the foot.

He could have said something like this, “Let me tell you what. We are going to get to the bottom of this story, and if this professor is lying, I will personally see to it that she suffers the full effects of the law. We will not allow a good man to be destroyed. All we want is the truth.”

But that’s only part of the picture.

In that case, the president of the United States would have been guilty of mocking a victim of sexual assault. What possible good could that do? What worthy purpose could that possibly serve? And how on earth could followers of Jesus cheer him on – if, in fact, she was a victim?

In my new book, I strongly urge supporters of Trump (especially evangelicals) to continue to support him, but in a nuanced way, appreciating the good and rejecting the bad. As Ben Shapiro tweeted in January, 2017, it’s not that hard to do this. “Basic decency is not tough.”