The Kavanaugh Hearings and the Clash Between #MeToo and #FalselyAccused

Michael Brown
|
Posted: Sep 24, 2018 12:01 AM
Share   Tweet
The opinions expressed by columnists are their own and do not necessarily represent the views of Townhall.com. 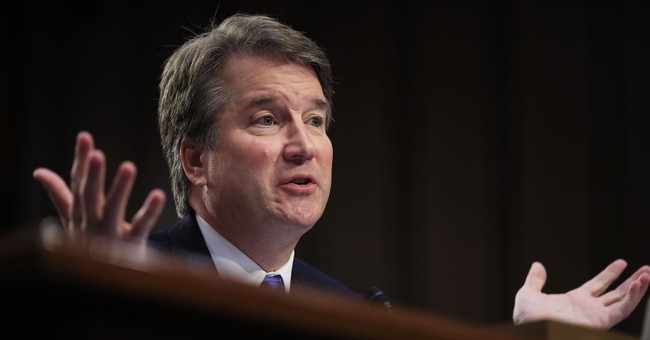 To date, not a single alleged witness provided by Prof. Christine Blasey Ford has corroborated her charges. And until Sunday night, not another woman came forward with any charge of any kind against Judge Kavanaugh. Now, however, another woman has emerged, also claiming improper behavior from Kavanaugh when he was in college. How do we sort this out?

The entire public testimony of Kavanaugh’s professional life has been virtually without blemish. That’s why pundits like Dennis Prager urge us not even to consider whether Kavanaugh misbehaved while in high-school 36 years ago. In Prager’s view, even if Kavanaugh was guilty, that’s not who he has been for decades, and we should appreciate the man he is and has been for so many years.

David French also reminded us that, in contrast with prominent men like Bill Clinton or Donald Trump, there is not a long line of women echoing the charges of abuse or impropriety. Because of this, he suggested, Kavanaugh has more of a presumption of innocence.

Then there is the seriousness of bringing a false accusation, something that could destroy someone’s career, family, or even life. Do we take that lightly? How can we?

An article on National Review notes that thousands of men have been falsely accused of sexual misconduct and crimes. Many have even spent years in prison although innocent. (The article, by Michelle Malkin, was titled, “Don’t ‘Believe Women.’ Believe Evidence.”)

For example, Brian Franklin, spent 21 years of a life sentence in prison after he was convicted in 1995 of sexually assaulting a 13-year-old girl who had committed perjury on the stand and later won a reversal of his conviction in 2016.

Joshua Horner, serving a 50-year sentence for sexual abuse of a young girl, was exonerated. There had been no DNA, no corroborating witnesses, and no other forensic evidence. Just the word of his accuser.

Victor Burnette cared for his grandmother and was getting ready to start his career.  In 1979 a woman identified him as the man who raped her. He was convicted and spent three decades fighting to clear his name before DNA testing cleared him in 2009.

How, then, do we sort things out? Those who’ve read my previous, relevant articles know that I’ve done my best to remain impartial, although I’ve been skeptical of Ford’s charges. (See here and here.)

Now that another accuser has come forward, there should be a clear path forward.

What does the evidence say? What do other eyewitnesses say?

It’s true that the attacks on Kavanaugh have the fingerprints of a Democratic hit job. But do we ignore them because their timing is beyond suspicious? If Justice Kavanaugh is not the man he claims to be (or at least, the man he claims he was back then), shouldn’t we know? Conversely, if he’s been falsely accused, how can we not do everything in our power to clear his name?

When it comes to Ford’s accusations, her credibility is not looking good. Not only did the other men she placed at the alleged party deny her report, but a lifelong female friend whom Ford referenced has also denied any knowledge of Ford’s story.

That doesn’t mean she’s evil or lying. As traumatic as the alleged event may have been, since she acknowledged being drunk and only having foggy memory of some of the salient details, she could simply be remembering incorrectly. Vividly, for sure; incorrectly, certainly possible.

When it comes to the new witness, reportedly a Never Trumper (if that matters), her charges are more extreme. But they are more easily corroborated (or refuted), since she makes very specific claims about a particular party at Yale that was allegedly known to quite a few others.

Already, however, we have serious reason to be skeptical of the charges brought by the new accuser, Deborah Ramirez.

As reported in The New Yorker, “She was at first hesitant to speak publicly, partly because her memories contained gaps because she had been drinking at the time of the alleged incident. In her initial conversations with The New Yorker, she was reluctant to characterize Kavanaugh’s role in the alleged incident with certainty. After six days of carefully assessing her memories and consulting with her attorney, Ramirez said that she felt confident enough of her recollections to say that she remembers” all the scandalous details.

With all respect to this new accuser, may I ask all of you who used to drink how well you can sort out your drunken memories from more than 30 years ago? How confident you would feel swearing under oath that missing details are now coming back accurately? How sure would you be about putting someone else’s life on the line based on your reconstruction of a foggy, intoxicated, old event?

When it comes to Deborah Ramirez, then, even if we give her the benefit of the doubt, there should be enough other people to confirm or deny her story one way or the other. And quickly, at that.

As Michelle Malkin urged, believe the evidence, not a gender.

Sadly, though, should Kavanaugh be exonerated, this whole situation reminds us of how difficult our society has made it for good people to serve in public office. Who in their right mind would welcome this kind of abuse?

May this also be a teachable moment for our nation before we destroy ourselves with our very own hands.