Michael Brown
|
Posted: Mar 19, 2018 12:01 AM
Share   Tweet
The opinions expressed by columnists are their own and do not necessarily represent the views of Townhall.com. 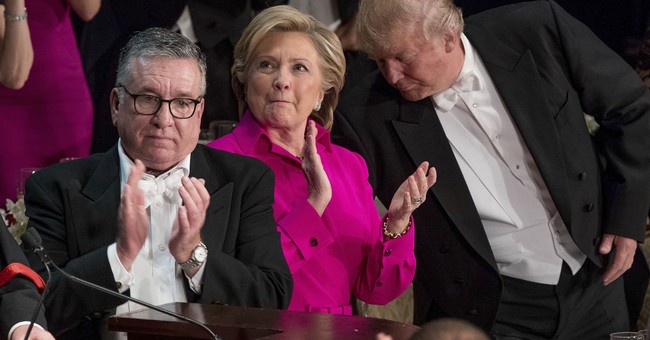 One day the right is mocking Hillary Clinton for taking a fall while walking down a flight of outdoor steps in India. The next day the left is mocking the president’s weight. Must we be so infantile in our criticisms? Aren’t there enough issues of substance for us to discuss and debate?

I don’t want to name names here, but suffice it to say that some major voices on the right seemed to enjoy watching Mrs. Clinton’s struggles in India. After all, she’s the fading icon of the left, the very image of failed policies and ideas. Mocking her is fine. That’s what we do to our political opponents.

And how many times did we replay the video of Mrs. Clinton collapsing during the presidential campaign, only to be whisked away by her bodyguards? Was this simply a concern for her health, which would have been legitimate for a presidential candidate? Or was it a matter of enjoying our ideological opponent’s apparent frailty? Were we concerned or were we gloating?

Conversely, without naming names on the left, Sarah Huckabee Sanders has been appearance-shamed more than once (quite cruelly and baselessly at that). And the president’s weight has been a matter of ongoing mockery, most recently from a major magazine. But they are both fair game, since their critics say they represent the worst of the right. They are allegedly liars. They are supposedly hateful. They can be vilified. That’s what we do to our political opponents.

And does anyone really think that those fat-shaming the president are genuinely concerned about his health and well-being? That they’re concerned that, if he doesn’t get in better shape, he might not serve out his term, let alone another term?

It’s one thing for political cartoonists to ply their trade with exaggerated and embarrassing caricatures. That’s what they do, and sometimes, putting aside the insulting caricatures, they are brilliant in their craft. Their artistry conveys a powerful message. Plus, public figures know they’re going to be caricatured. (Think, for example of Barack Obama’s ears or George W. Bush’s puzzled look.)

It’s another thing, though, when political commentators on the right and the left get pleasure out of mockery and insult. (And I don’t mean mocking someone’s position. I mean mocking their appearance or their health struggles.)

Unfortunately, the mocking game plays well, like throwing meat to a bunch of hungry sharks. The insults lead to a feeding fest among the faithful followers.

In my view, when we degrade others in such childish ways, we ultimately degrade ourselves. We make ourselves less credible. We make our positions less worthy of serious discussion. We make our viewpoints less tenable.

Let me drill this home with a hypothetical example.

Imagine that I’m debating a liberal university professor about the culture wars. Someone in the audience interrupts the debate, calling me some crude name. In response, I shout – no, sing –  back, “Stick and stones may break my bones but words will never hurt me.” And I do this while shaking my head as if to say, “Na-na na-na-na! You can’t hurt me!”

How would you respond to the rest of my presentation? How seriously would you take my scholarly arguments?

Or what if I got upset with my debating opponent and began to insult his choice of clothes or the way he wore his hair or the names of his wife and children? Would I enhance my position in your eyes? Enough said.

I personally believe that the depth of our convictions can best be seen against the backdrop of fairness and civility. In other words, we can be definitive and dogmatic, convicted and clear, incisive and insightful without being mean-spirited, let alone childish. In fact, when we hold our ground with grace, we expose the incivility of our opponents.

Let them degrade into the name-calling. Let them make the threats. Let them act like children. They hurt their cause, not ours.

You might say, “But these days, the president is leading the charge, calling others by crude names and mocking their failures.”

Right now, our nation is precariously divided, and it’s becoming increasingly rare that both sides can come together for serious debate and discussion. But there are life and death issues that divide us, because of which it is imperative that we get our message out loudly and clearly.

To the extent we can step above the fray, acting like adults rather than children, we have a chance of being heard. And personally, I want to be heard.

As for Christian leaders, there’s a biblical passage that speaks directly to us: “A servant of the Lord must not quarrel but must be kind to everyone, be able to teach, and be patient with difficult people. Gently instruct those who oppose the truth. Perhaps God will change those people's hearts, and they will learn the truth. Then they will come to their senses and escape from the devil's trap. For they have been held captive by him to do whatever he wants” (2 Tim. 2:24-26, NLT).