Did God Help the Eagles Win the Super Bowl?

Michael Brown
|
Posted: Feb 06, 2018 12:01 AM
Share   Tweet
The opinions expressed by columnists are their own and do not necessarily represent the views of Townhall.com. 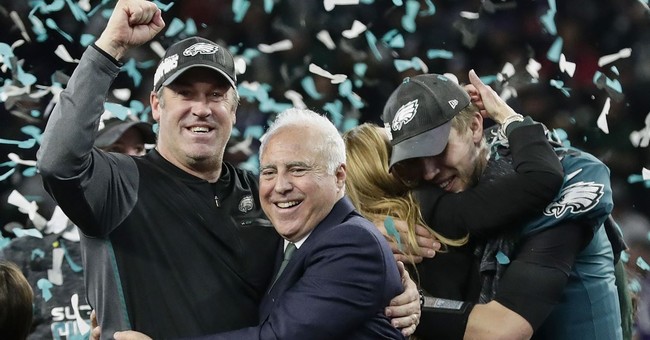 I was once heard the story of a father and son who were watching a boxing match. When the fight started, one of the boxers crossed himself, prompting the son to ask, “Dad, will that help him win the fight?” The father responded, “Only if he can punch.” And that begs the question: Does God really get involved in sports events? Does He care who wins a boxing match – or football game?

On the one hand, you could argue that God is sovereign, and if He knows the number of hairs on our head, and not one bird falls to the ground apart from Him (Matthew 10:29-30), then yes, He gets involved in sports as well. After all, hundreds of millions of people watch sports events, and their lives are affected positively or negatively by sports. It would make sense that God gets involved.

On the other hand, you could argue that it is absurd to think that God gets involved with something as idolatrous as sports, with football (not the Lord) dominating our Sundays, with billions of dollars lost on betting, with violence being celebrated, and with people getting more excited about the score of a game than about the fate of the world. It would make sense that God does not get involved.

Looking at this pragmatically, no coach-player duo has had more success in the Super Bowl era than Bill Belichik and Tom Brady, and neither of them, to my knowledge, profess to be men of strong faith. And didn’t they have a seemingly miraculous, come from behind victory in last year’s Super Bowl?

And think of Tim Tebow, perhaps the most visible born-again Christian ever to play in the NFL. He didn’t make it in the NFL, while strong Christians like Carson Wentz and Deshaun Watson both suffered season-ending injuries. Why didn’t God protect them?

As for the outcome of Super Bowl LII, there were no miraculous-type plays (like David Tyree’s helmet catch or Franco Harris’s “immaculate reception”), and the most unusual play (a ricocheted pass that became an interception) went against the Eagles.

But perhaps we’re viewing this the wrong way.

Rather than looking for signs of divine intervention, what if we simply look for the practical fruit of strong faith? What if we look for the positive effect that strong Christian commitment had on the Eagles? And what if we consider the fact that, as followers of Jesus, we are do to everything for His glory (see 1 Corinthians 10:31; Colossians 3:17)?

Throughout the year, I read about the deep Christian commitment of quarterback Carson Wentz. Then, after his injury, he was replaced by backup Nick Foles, also a deeply committed Christian. And the quarterback coach, Frank Reich, himself a former NFL player, served as a seminary president before returning to football.

Not only so, but the head coach of the Eagles, Doug Pedersen, had been working at the high school level 9 years ago and was voted the worst coaching hire in the NFL in 2016. When asked after the game how he could explain going from high school coach 9 years ago to winning the Super Bowl, he responded, “I can only give the praise to my Lord and Savior Jesus Christ for giving me this opportunity. . . .” How many coaches are so bold?

And two other players interviewed at the end of the game, tight-end Zach Ertz and quarterback Nick Foles, both openly glorified the Lord.

In fact, earlier in the week, Ertz told reporters that as a follower of Jesus, his number one goal was to make disciples, while Foles shared that he’s currently enrolled in seminary and would one day like to be a high school pastor.

To put things in further perspective, former NFL coach (and current TV commentator) Tony Dungy, himself a committed Christian, tweeted that after “all the celebrations and confetti,” his 11-year-old Justin “caught up with the 3 Eagles QBs Nick Foles, Carson Wentz & Nate Sudfeld along with Zach Ertz who scored the winning TD. They were in a room by themselves—praying and thanking God. It was great for him to see that.”

So, these men, after one of the greatest games in Super Bowl history and enjoying a sports high that hardly any of us could relate to, were alone in a room, praying and thanking God.

Recommended
Did You Notice Anything Ironic About That Tweet From John Brennan on Iran?
Matt Vespa

Could it be, then, that rather than the Lord supernaturally helping them (or, hurting the Patriots, who doubtless had some strong Christians too), it was the Christian character of many on the team that helped them in key moments? That their strong faith foundation enabled them to perform so well under so much pressure? And that, perhaps, it was Coach Pederson’s confidence in God’s favor on his life that helped him make one of the greatest, boldest, most audacious calls in football history?

Interestingly, the Eagles’ players were so well-known for their commitment to the Lord that New England’s Matthew Slater, himself a strong believer, said this while meeting with the media last week: “I really appreciate [Carson Wentz’s] boldness for the Gospel, how he represents Christ day in and day out. And it's not only him. You know, Nick [Foles] does that as well. Chris Maragos. Brother Burton. I mean, there are a lot of brothers over there that stand firm for what they believe in, they represent the Gospel in a tremendous fashion.”

And now, thanks to their incredible victory, these men will have a platform for the rest of their lives to share their faith. Could the Lord have helped orchestrate that?