Michael Brown
|
Posted: May 17, 2017 10:14 AM
Share   Tweet
The opinions expressed by columnists are their own and do not necessarily represent the views of Townhall.com. 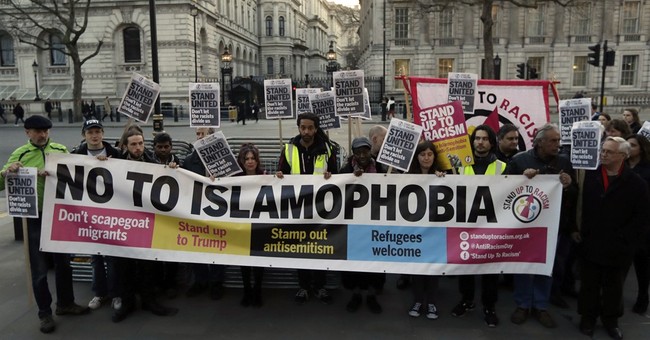 Last week, Robert Spencer, Director of Jihad Watch and a New York Times bestselling author on radical Islam, was invited to speak at the University of Buffalo. But he was unable to say much because of the vocal opposition. He was shouted down and reviled, especially when attempting to read Islamic texts describing Islamic beliefs.

To paraphrase, “Not on our campus! We are progressive. We are liberal. We are enlightened. You will not bring your hate-filled bigotry here!”

In Spencer’s own words, “I spoke a few sentences and made a couple of points in between being screamed at by Leftist and Islamic supremacist fascists who think they’re opposing fascism.”

Did you catch that? Spencer was opposed by staunch liberals and staunch Muslims. What an odd couple they make, yet this has happened time and again in the recent past. Why?

A few years ago, I read about a pro-Hamas, anti-Israel rally led by feminists and LGBT activists, among others on the left. Why in the world would groups like this support Hamas, which would kill or imprison them for their beliefs (and their sexual or romantic proclivities)? And why would they oppose Israel, which would welcome them with open arms? (I’m not talking about religious Jews, who would certainly not welcome them. I’m talking about the population as a whole, which is quite “progressive.” Note also that it wasn’t the ultra-Orthodox Jews who were fighting Hamas, so the rally was not targeting them.)

This makes no sense, unless there is something deeper that unites these groups (such as anti-Israel animus) or a serious deception they are buying into (such as the idea that true Islam is always a religion of peace and tolerance;  in John Zmirak’s words, they are Islam’s “useful idiots”).

And why is it that the most liberal political leaders in the West are often the strongest defenders of Islam? Why are they constantly telling us that real Islam is neither radical nor violent?

Getting back to Robert Spencer (not to be confused with the alt-right leader Richard Spencer), he has “led seminars on Islam and jihad for the FBI, the United States Central Command, United States Army Command and General Staff College, the U.S. Army’s Asymmetric Warfare Group, the Joint Terrorism Task Force (JTTF), the Justice Department’s Anti-Terrorism Advisory Council and the U.S. intelligence community. He has discussed jihad, Islam, and terrorism at a workshop sponsored by the U.S. State Department and the German Foreign Ministry. He is a consultant with the Center for Security Policy and vice president of the American Freedom Defense Initiative.

“Spencer has appeared on the BBC, ABC News, CNN, FoxNews’s O’Reilly Factor, Megyn Kelly’s The Kelly File, the Sean Hannity Show,” among many, many others, which would lead one to believe that he was highly qualified to give an address on campus.

Not today. His allegedly bigoted views about a beautiful religion were not welcome. He is in violation of the progressive PC code, which includes, “Thou shalt not insult Islam.”

The University of Buffalo’s student newspaper reported, “Spencer planned to speak to students about ‘the dangers of jihad in today’s world’ but constant heckling from the crowd made it near impossible for him to complete a full sentence.”

Ah, the blissful beauty of tolerance! How mellifluous are its melodies. How sweet its sounds. Hardly.

Spencer wrote, “These students have been hoodwinked into thinking that ‘Islamophobes,’ rather than jihad terrorists, are killing people around the world.”

Yes, those are the really dangerous enemies, those “Islamophobes,” not those jihadi terrorists. And the enemies are not the Islamists who enforce a death penalty for “apostasy” (meaning, leaving Islam). The enemies are the ones who call this barbary out.

Spencer noted the biting irony of it all: “For example, one man held a sign that read ‘Queers Against Islamophobia.’ The crowd booed lustily when I attempted to read from Islamic authorities about Islam’s death penalty for homosexuality. Even to read from Islamic sources is hate, apparently, at the University at Buffalo -- unless, of course, one endorses such penalties rather than oppose them.”

Yes, these days, if you expose something murderous or hateful, you are guilty of a worse sin – the sin of judging. And on campuses these days, there is hardly a worse sin you could commit.

I once spotted a comment responding to a YouTube video posted by a 12-year old boy who opposed same-sex marriage based on the Bible. The comment read: “You, just like everyone who is against gay marriage, is a mentally retarded bigot. No exceptions. Now go to hell.”

This is the voice of tolerance, the same voice that drowned out Spencer in Buffalo. And how interesting that “tolerance” reviles a 12-year-old boy who does not support same-sex “marriage” but then defends Islam that calls for a death-penalty for homosexual practice. How interesting that “tolerance” wants to silence Christians who peacefully oppose homosexual activism as well as silence those who draw attention to Islam’s violent opposition to homosexuality. What a laughable contradiction.

But this is no laughing matter. As Spencer noted, “By shutting down any discussion of the motivating ideology of the jihad threat and consigning it all to the realm of ‘hatred’ and ‘bigotry,’ the student mob at the University of Buffalo enables that threat to grow. One day, the Leftists who screamed, heckled, and booed as I tried to speak may very well experience the consequences of their actions, carried out by those with whom they thought they stood in solidarity.”

The Left needs to end its naïve love affair with Islam. And may peace-loving Muslims help lead the way in working against radical Islam.