The Strange Union of Christianity and Violent Sports

Michael Brown
|
Posted: Sep 28, 2016 12:01 AM
Share   Tweet
The opinions expressed by columnists are their own and do not necessarily represent the views of Townhall.com. 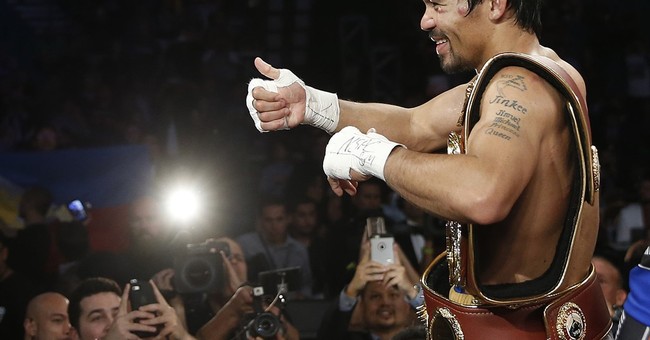 God alone knows the heart and only He can judge who belongs to Him and who doesn’t, but there is something exceedingly strange about a fighter pulverizing his or her opponent, leaving them bloody, dazed, and broken on the floor, while giving honor to Jesus Christ who gave them the victory. How can this be?

This past Saturday night, the most feared woman in Mixed Martial Arts (MMA), Cristiane Justino, better known as Cris Cyborg, walked out to fight her Swedish opponent to the accompaniment of a beautiful worship song known around the world, also holding up the cross around her neck before kissing it.

When the fight began, as expected, Cyborg dominated her game opponent, punching her in the face and kneeing her in the stomach and throwing her to the ground until the other woman’s face was a mess, her left eye swollen shut and blood staining her shirt and shorts.

Was Cyborg helped by the Lord to administer this beating?

It is true that, in keeping with MMA custom, the two combatants hugged in the ring afterwards in a sign of mutual respect, and it is true that, for them, this is a sport that they engage in by choice. It is also true that, ultimately, the fighter’s safety is of paramount importance, meaning that no one wants to see a fighter permanently injured or, worse still, killed.

But is there nothing odd about blasting praise music through a massive PA system and kissing the cross before beating the living daylights out of an opponent, often rendering them unconscious with kicks and punches before the referee mercifully steps in? (Remember, we’re talking about doing this for the entertainment of the crowds, as was done in ancient Rome in the Colosseum, as opposed to engaging in a just war to protect a country or engaging in an act of self-defense.)

Is there any harmony between violence like this and the Spirit of God?

Again, I am not judging the hearts of the combatants and claiming they have no relationship with God. That is for Him to decide. I’m simply raising some very obvious questions.

An article last year on the MMA Weekly website highlighted some post-fight comments made by a few of the fighters.

The first comments of the likable Benson Henderson following either a win or a loss are, “I can do all things through Christ who strengthens me,” citing Philippians 4:13. Is this what Paul had in mind?

If this wasn’t clear enough, he added in his imperfect English, “Go for Jesus, not forget Jesus, people.”

Obviously, I share Romero’s sentiments and wish that more pastors would preach what he preached, bringing a wake-up call to the nation.

But Romero had just knocked out Machida – literally, knocked him unconscious – by pummeling his face with his elbows, after which he preached Jesus to the crowd, which was there to see violent knockouts just like this. How can this be?

It has been common for decades for Catholic boxers to make the sign of the cross before fighting, while others kneel down and pray in their corner before the bell rings (think Manny Pacquiao, as a prominent example).

And they will often thank God for helping them defeat their opponent, which could also mean through a flurry of violent, life-threatening blows.

But does the Lord really get involved in all this? Is He really helping these fighters smash their opponents? (You could just as well ask if He influences the outcome of other sports events, while I’m quite aware that many question the violence of the NFL and the physical debilitation it brings.)

I have friends who have spent time with Manny Pacquiao, and he seems to be a genuine believer who loves the Lord and has a big heart to help his needy countrymen in the Philippines. In fact, the boxing promoter Bob Arum famously commented that Manny was the welfare system of his nation.

It is also clear that Manny does not want to hurt his opponents and has even let up at times rather than punish them unduly. Once again, I am not writing this as his judge.

But when Jesus-exalting music blares through a massive auditorium where fans have gathered to feast on violence and bloodshed, something is terribly wrong.

May He sensitize our hearts and the hearts of these athletes.