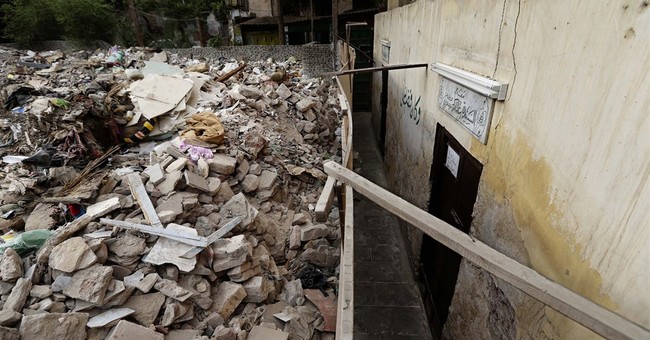 Throughout its 1,400 year history, Islam has been marked by internal violence and bloody factionalism. What is happening today in Egypt and Syria and other Islamic nations is just the most recent manifestation of this deadly phenomenon.

Muhammad, who is the model human being for Muslims, carried out acts of violence (including mass beheadings) against his foes, while the division of Islam into Sunni and Shia began shortly after Muhammad’s death in 632 AD, when his followers had a dispute over his successor.

A minority of his followers (today’s Shiites) wanted his cousin and son-in-law Ali to become the next leader, thereby keeping the succession within the family, but the majority (today’s Sunnis) favored a different leader as the first caliph.

“Eventually, Ali was chosen as the fourth caliph, but not before violent conflict broke out. Two of the earliest caliphs were murdered. War erupted when Ali became caliph, and he too was killed in fighting in the year 661 near the town of Kufa, now in present-day Iraq.

“The violence and war split the small community of Muslims into two branches that would never reunite.

“The war continued with Ali’s son, Hussein, leading the Shia. ‘Hussein rejected the rule of the caliph at the time,’ says Vali Nasr, author of The Shia Revival. ‘He stood up to the caliph’s very large army on the battlefield. He and 72 members of his family and companions fought against a very large Arab army of the caliph. They were all massacred.’

Hussein was beheaded and his head brought as tribute to the Sunni caliph (then in Damascus), and the memory of Hussein’s death continues to fuel the fires of Shiite passion to this day, including the passion for martyrdom.

In recent weeks, Sunni Muslims were killing Shiite Muslims in Egypt – according to reports, dragging them out of their houses and slaughtering them – while Shias and Sunnis have been killing each other in Syria for months now.

In Iraq, many of the suicide bombings involve Muslims blowing up other Muslims, while the terribly costly Iran-Iraq war in the 1980’s was, among other things, a clash between Shiites (Iran) and Sunnis (Iraq).

Does anyone detect a pattern here?

It is true that all major religions have had their “civil wars,” but in the first 300 years of Christianity, how many Church leaders in one group were killed by Church leaders in another group? How many were massacred? Decapitated? (Approximately zero.)

The very fact that critics often point back to the horrors of the Crusades and Inquisitions, both of which represent horrific aberrations that did not begin until more than 1,000 years after the time of Jesus and which have not been repeated for centuries, is a reminder that violent and murderous acts in the name of religion have not been the norm for Christianity.

Last week, video footage surfaced of a Catholic priest in Syria having his head cut off (slowly) by Muslim insurgents – in other words, the side we are backing – as a crowd gathered to record the event on their cell phones as they chanted “Allahu Akbar” (“Allah is great”). Such images have become increasingly (and disturbingly) common in recent years. In contrast, with more than two-billion professing Christians in the world, where are the videos of Christians beheading Muslims while chanting, “Jesus is Lord”?

The Religion of Peace website helps us put things in perspective:

· More people are killed by Islamists each year than in all 350 years of the Spanish Inquisition combined.

· Islamic terrorists murder more people every day than the Ku Klux Klan has in the last 50 years.

· More civilians were killed by Muslim extremists in two hours on September 11th than in the 36 years of sectarian conflict in Northern Ireland.

· 19 Muslim hijackers killed more innocents in two hours on September 11th than the number of American criminals executed in the last 65 years.

This same website keeps a running count on Islamic acts of violence, offers these figures from the last week:

· 2013.07.06 (Potsikum, Nigeria) - Islamists massacre over forty students and teachers at a school, in some cases burning children alive. [According to AP figures, “Islamic militants from Boko Haram and breakaway groups have killed more than 1,600 civilians (in Nigeria) in suicide bombings and other attacks since 2010.”]

· 2013.07.05 (Baghdad, Iraq) - A Sunni suicide bomber manages to take out over fifteen Shia worshippers at their mosque.

Ironically, while the modern state of Israel is often blamed for conflicts in the Middle East, it can hardly be blamed for this widespread, chronic pattern of Muslim violence, as Yitschak Ben Gad pointed out in his 1991 book Politics, Lies, and Videotape: “The history of the Arab world since 1948 is marked by murder, subversion, coup d’etats, persecutions, civil wars, hatred, and bloodshed. Hundreds of thousands of Arabs were murdered by fellow Arabs. Many hundreds of leaders, presidents, king, ministers, religious leader and other dignitaries were assassinated. At different times, the Arab armies fought one another and caused tens of thousands of casualties.”

The roots of violent factionalism run very deep in Islam.