The Little Boy Who is a "She-lebrity" 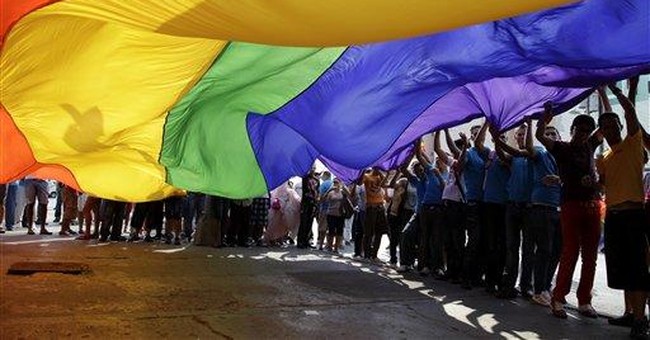 By now you’ve probably heard about the new children’s cartoon show called “Shezow,” featuring a 12-year-old boy named Guy “who uses a magic ring to transform himself into a crime-fighting girl” wearing “a purple skirt and cape, as well as pink gloves and white boots.” And to change from boy to girl, he just says the magic words, “You go girl!”

Another harmless TV program for the little ones? Not on your life. This is yet another attempt to blur gender distinctions and to celebrate transgender identity. And in this case, the target audience is very young, aged two to 11.

Lest you think I’m simply a fundamentalist, right-wing, frothing-at-the-mouth, gay-conspiracy-theorist (I’ve been called worse than that!), let me remind you that the largest toy catalog in Sweden went gender neutral last year. Yes, Top Toy Group released a 2012 Christmas catalog featuring girls playing with Nerf guns and boys playing with princess dolls and using hairdryers to dry girls’ hair. (This link has pictures.)

Matthew Day reports that, “In the past the company, which holds the franchise for the Toys R Us and BR-Toys chains, has fallen foul of regulations in Sweden prohibiting sexist advertising.

“The advertising standard ombudsman had previously criticised the company for producing a television commercial which spoke of ‘cars for boys, princesses for girls’.”

The company has now made its amends, said Jan Nyberg, sales director at Top Toy, explaining that, “With the new way of thinking about gender there is nothing that is right or wrong. A toy is not a boy or girl thing; it's a toy for children.”

Indeed, “The Scandinavian country has strived to foster a culture of gender neutrality, and any advertisement deemed sexist faces legal sanctions or, if not, the wrath of angered Swedes.”

In keeping with this, schools have been charged with breaking down gender stereotypes, a gender neutral pronoun has been introduced (pronounced “hen”), and parents are being encouraged to give boy’s names to their girls and girl’s names to their boys. I kid you not.

Here in the States, already in 2006, the New York Times reported that, “At the Park Day School in Oakland [California], teachers are taught a gender-neutral vocabulary and are urged to line up students by sneaker color rather than by gender. ‘We are careful not to create a situation where students are being boxed in,’ said Tom Little, the school’s director. ‘We allow them to move back and forth until something feels right.’”

Last year in Germany, Nils Pickert hailed as “father of the year,” was praised for wearing “women’s clothes (including nail polish) to help his 5-year-old son feel good about going out in dresses and skirts.”

And the German magazine Emma reported that the story had a “happy ending,” as Pickert explained,

“And what's the little guy doing by now? He's painting his fingernails. He thinks it looks pretty on my nails, too. He's simply smiling, when other boys (and it's nearly always boys) want to make fun of him and says: ‘You only don't dare to wear skirts and dresses because your dads don't dare to either.’ That's how broad his own shoulders have become by now. And all thanks to daddy in a skirt.”

Parental solidarity is one thing. Contributing to a little boy’s confusion is another.

And then there are the “gender-bender” days at school here in America, beginning with elementary schools, where the kids are encouraged to come to school dressed as the opposite sex.

Is it so farfetched to suggest that these kinds of attitudes and activities have contributed to the ever-increasing gender confusion found among today’s kids? And is it any coincidence that, after years of pressure from transgender activists, the American Psychiatric Society is now removing the term “gender identity disorder” from its Diagnostic and Statistical Manual of Mental Disorders (DSM-5)?

And so, rather than having compassion on children and adults who struggle with their gender identity and investing the necessary resources to try to understand the cause of their struggles, and rather than recognizing that many kids go through all kinds of phases that parents should not encourage, we are being told to embrace transgenderism – no, to celebrate it.

To put this in context, some schools use the Riddle Homophobia Scale, named after Dr. Dorothy Riddle, which lists four “Homophobic Levels of Attitude” and four “Positive Levels of Attitude.” (For details, see A Queer Thing Happened to America.)

Listed under the Homophobic category are: 1) Repulsion; 2) Pity; 3) Tolerance; and 4) Acceptance. (That’s correct: “Tolerance” and “Acceptance” are now considered homophobic.)

Listed under the Positive category are: 5) Support; 6) Admiration; 7) Appreciation; and 8) Nurturance. In other words, your kids in school should have an attitude of support, admiration, appreciation, and nurturance towards homosexuality, otherwise they are homophobic.

LGBT activists have simply added “transgender” to the mix, the latest cause to be supported, admired, appreciated, nurtured, and celebrated. Can you say, “Shezow!”?