Michael Barone
|
Posted: Nov 15, 2016 12:01 AM
Share   Tweet
The opinions expressed by columnists are their own and do not necessarily represent the views of Townhall.com. 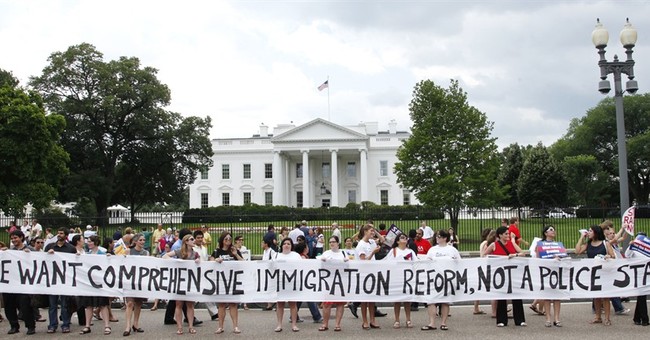 Trending
One of the issues President-elect Donald Trump says he wants Congress to act on is immigration. That's not entirely surprising, given that he spotlighted just that issue, in incendiary terms, after gliding down that escalator in the Trump Tower and announcing he was running 17 months ago.

Last week, when many assumed Hillary Clinton would be elected -- perhaps even with a Democratic Senate -- many liberals also highlighted immigration legislation as an immediate priority. They looked forward to passage of something very much like the Gang of 13 bill, which passed the Senate with bipartisan support in 2013, and the very similar bills that passed the Senate in 2006 and were squelched there in 2007 by the legislative malpractice of the new majority leader, Harry Reid.

Those bills provided for immediately giving legal status to millions of immigrants, plus provisions purporting to strengthen border control and workplace enforcement -- but critics thought they would prove as ineffective as similar provisions in the bipartisan 1986 law.

It seemed reasonable that a Democratic Senate would advance such a bill and that House Speaker Paul Ryan, sympathetic to it in the past, would allow it on the floor, where it would get enough Republican votes for passage.

That's now off. The interesting question is, What kind of bill could a Republican Senate and House pass? First principle: It must be acceptable to Trump.

Such a bill wouldn't provide for the immediate deportation of 11 million undocumented immigrants or a ban on Muslim immigrants. In the campaign, Democrats seized on Trump's statements backing such moves and -- understandably, for partisan campaigners -- ignored his later statements dialing back from those positions.

Mainstream media -- less understandably, seeing as they're supposed to report the facts -- ignored those statements, too, even though they were set forth with careful precision in the speech he delivered Aug. 31 in Phoenix immediately after his respectful meeting with Mexican President Enrique Pena Nieto in Mexico City.

In that speech, Trump reiterated his promise to build a wall along the Mexican border but said decisions on giving legal status to noncriminal undocumented immigrants would be made "in several years, when we have accomplished all of our enforcement and deportation goals." And he would not bar all Muslims but suspend "visas to any place where adequate screening cannot occur."

Enforcement measures would include not just the wall but a biometric entry-exit visa system (about half of undocumented immigrants overstayed legal visas) and mandatory E-Verify for job applicants. Those provisions would most likely produce attrition of the undocumented population as Arizona's E-Verify requirement did there.

Trump obviously would not approve the provisions to give immediate legal status that vote-hungry Democrats want and that Facebook billionaire Mark Zuckerberg's FWD.us lobby backs. And Ryan, after lunch with Trump last week, insisted that enforcement must come first.

Ryan also backed the little-noticed 10th of Trump's 10 points in his Phoenix speech: shifting legal immigration from extended-family reunification, mostly of low-skilled immigrants, and setting aside many more places for high-skilled immigrants "based on merit, skill and proficiency."

That resembles the point systems of Canada and Australia. As law professor F.H. Buckley points out, Canada, with one-tenth the U.S. population, admits about 160,000 immigrants yearly under economic categories -- more than the U.S.' 140,000. As a result, immigrants in Canada, unlike here, have incomes above, not below, the national average.

It's possible that almost all Republicans and some Democrats, especially senators facing re-election in 2018 in states where Trump won, would support a bill with tougher enforcement, deferred decisions on deporting or giving legal status to noncriminal undocumented immigrants and a shift toward high-skilled immigration.

Who wants to argue for a lower-skilled future population or against enforcement measures technologically less challenging than transactions Visa and MasterCard process every day? Who wants to argue that immigrants who came here illegally and have committed other crimes should not be deported and that "sanctuary cities" should be able to block enforcement of federal immigration laws?

Democrats wouldn't be happy if they had to abandon their goal of giving immediate legal status to millions of people they want to be Democratic voters, and Zuckerberg's tech buddies wouldn't be happy to abandon the H-1B visas, which enable them to hire low-cost indentured servants, and have to pay market salaries to high-skilled immigrants. But Trump and the Republicans, if they were to play it right, might force them to.