Michael Barone
|
Posted: Jun 17, 2016 12:01 AM
Share   Tweet
The opinions expressed by columnists are their own and do not necessarily represent the views of Townhall.com. 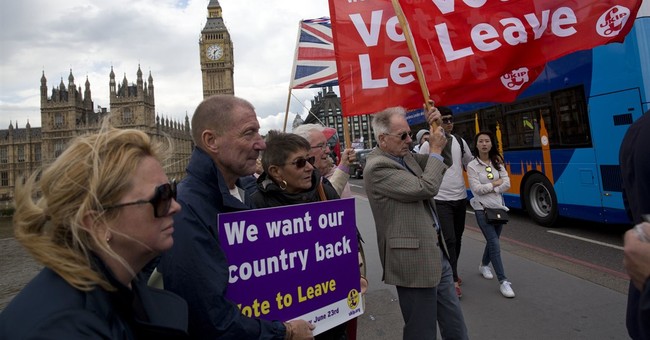 Trending
"Market Angst as U.K. Edges to Exit," proclaims the headline on The Wall Street Journal's lead story. The exit referred to is Britain's departure from the European Union, a move that will be mandated if a majority votes "leave" rather than "remain" in the national referendum next Thursday.

This outcome would be as astounding, to use the word Lincoln chose to describe the Civil War in his second inaugural address, to British and European financial markets and political insiders as Donald Trump's victory for the Republican nomination has been to their American counterparts.

The most recent polls have shown "leave" gaining ground and leading "remain" among British voters. There is reason to be skeptical about British polls. Pollsters there (with one exception, who flinched and didn't announce his results) totally missed the Conservative Party's victory in the May 2015 general election.

But their big mistake, in retrospect, was oversampling young voters, who didn't turn out in the numbers anticipated. That resulted in overstating the support for Labour. But in this election, the young tend to support "remain." If they're being oversampled now, "leave" is in a stronger position than current polling shows.

The recent surge for "leave" seemed unlikely to elites. Conservative Prime Minister David Cameron, the leftist Labour leader Jeremy Corbyn, the Scottish Nationalists and the Conservatives' 2010-2015 coalition partner Liberal Democrats all support "remain." So do the president of the Bank of England and the financial leaders of the City of London.

They all argue that Brexit would produce uncertainty and harm Britain's economy. Exports to the Continent might be reduced. Financial firms might flee. All this is plausible but conjectural. Many of these same experts believed the euro would be a great success and urged Britain to join. Not many Brits are sorry Britain didn't.

Missing from the "remain" camp's campaign of fear is any affirmative case for EU membership. That's not a coincidence. When Britain's Parliament and voters agreed to join in the 1970s, Europe looked shiny, bright and dynamic, Britain gritty, dull and stagnant.

Now things are the other way around. Since the financial crisis, Britain has grown more than any other advanced country. Europe, with its stifling labor laws, overabundant welfare states and dodgy finances, has grown not at all.

These arguments aren't advanced just by ragtag members of the UK Independence Party. The leaders of the "leave" campaign are Boris Johnson, the dazzling mayor of London for eight years until last month, and Michael Gove, who as education and justice secretary was the Conservatives' most effective reformer.

The argument they make most strongly for leaving is self-government. The European Union is an outgrowth of trade agreements made during the 1950s to prevent Germany and France from going to war again. The EU's leaders, not democratically accountable, have pursued "an ever-closer union," overriding sovereign states.

It was a noble aim, originally, and has had good effects in pushing nations wishing EU membership to meet democratic norms. But it has failed to create a European consciousness that can replicate the best effects, so visible in Britain over the years, of allegiance to a nation-state.

The lack of self-government is most visible in immigration. Britain must accept EU immigrants, more from Eastern Europe than it would like, and fears being forced to accept some of the nearly 1 million "refugees" that German Chancellor Angela Merkel, on her own, welcomed to Germany in August 2015.

The dangers such young men -- or, in time, their young sons -- can cause have been visible in Cologne, Paris, Brussels, San Bernardino and Orlando, as they were in Madrid and London a decade ago.

Johnson and Gove advocate an alternative for Britain, one advanced for America in these columns: a point system, to allow in only high-skill immigrants, as has been done so successfully in Australia and Canada.

Self-government also means getting away from EU over-regulation, symbolized by its dictates on the shape of bananas. The Continental tradition of France and Germany is that anything must be regulated before it is allowed. The British common-law tradition is that things are allowed until the people's representatives decide they must be regulated or banned.

In Britain in April Barack Obama called on Britons to vote "remain" and promised that if they didn't the U.S. would leave them "in the back of the queue" in trade negotiations -- a shameful stance toward a valiant ally.

Brexit is a choice for the British people, one we can live with and should respect whichever way they go.