Michael Barone
|
Posted: Jun 14, 2016 12:01 AM
Share   Tweet
The opinions expressed by columnists are their own and do not necessarily represent the views of Townhall.com. 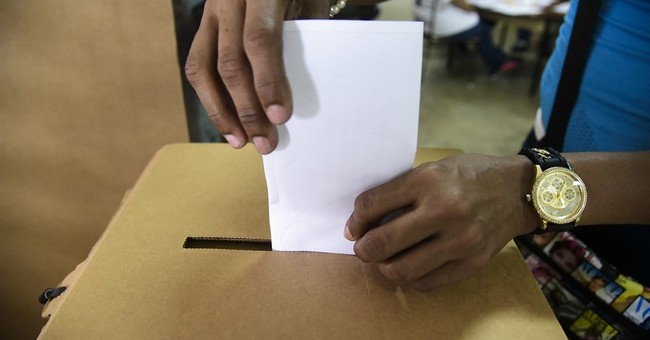 Trending
Are the exit polls, on which just about every elections analyst has relied, wrong? That's a question raised by New York Times Upshot writer Nate Cohn -- a question whose answers have serious implications for how you look at the 2016 general election.

Standard analysis is that Democrats have a built-in advantage because the electorate is increasingly non-white. The exit polls say the white percentage of the electorate declined from 77 percent in 2004 to 74 percent in 2008 and 72 percent in 2012. In that year, they said, 13 percent of voters were black, 10 percent Hispanics, 3 percent Asian.

Since then, these groups have been voting heavily Democratic, by varying margins, and analysts have argued that it's very hard for a Republican to win, especially one who has antagonized non-whites, as Donald Trump has.

But exit polls may not be accurate, Cohn argues. As he points out, they are designed not to accurately represent the proportions of each demographic group, but to indicate the actual result, within a statistical margin of error, and to show the differing responses of significant subgroups.

Moreover, as Cohn doesn't mention, the results are massaged by the exit pollsters and media analysts, who are aware that some voters (the young, for example) are more likely than others to fill out exit poll questionnaires.

So Cohn looks at two other sources of information on how people voted, the Census Bureau's Current Population Survey and the Democratic firm Catalist's voter file compiled from public voting records.

Both sources, like exit polls, have their weaknesses. Many non-voters tell the Census Bureau they voted. Voter records are often erroneous or out of date. Even so, the two sources paint a significantly different and possibly more accurate picture of the electorate than the exit poll.

Most significantly, they peg the proportion of non-college-graduate whites over age 45 -- Donald Trump's core group -- as 30 and 29 percent of voters, significantly higher than the exit poll's 23 percent.

Assuming these data are correct, Cohn estimates that 34 percent of Barack Obama's voters in 2012 were non-college whites, not the 25 percent that the exit poll indicates. Obama's share of that demographic fell in 2008, but mainly in the South, and held up in most of the North, including target states Ohio, Wisconsin, Iowa and Colorado.

In other words, Democrats are more dependent on non-college whites than most analysts assume. For years they've lost ground among this group, but they could lose more, in which case Obama's 51 percent 2012 majority may not be duplicated.

Current polling shows Trump running better than Romney among non-college whites. But he's also running worse among white college graduates, and so makes no gains among all whites.

But note that one thing pollsters have difficulty gauging is turnout. Contrary to widespread impression, turnout -- and particularly Democratic turnout -- has been declining in the Obama years. Obama received 3.5 million fewer votes in 2012 than 2008. Cohn presents data showing turnout down, especially among young white Democrats.

That resembles something visible in this year's primary results. Overall, Republican and Democratic turnout was just about the same. But up through April 5, when the outcomes were in doubt, Republican turnout was 5 million higher than Democratic. In target states the Republican edge was 1.6 million.

This is a vivid contrast with 2008, when Republican turnout exceeded Democratic in only five states, two with primaries de-sanctioned by national Democrats (Florida, Michigan), two in heavily Mormon Utah and Idaho, plus Alabama, Arizona and Nebraska.

Primary turnout proved a harbinger of the heavy turnout favorable to Democrats in November 2008. It's not clear whether it will this November, or whether the exit polls are wrong. But both are signs that Trump's chances might -- might -- be better than current polling suggests.