Michael Barone
|
Posted: Apr 19, 2016 12:01 AM
Share   Tweet
The opinions expressed by columnists are their own and do not necessarily represent the views of Townhall.com. 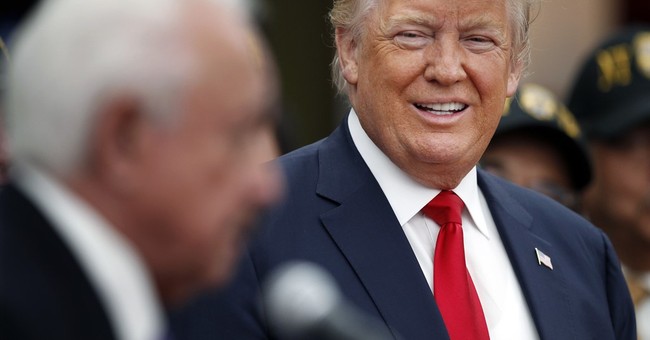 Noo Yawk. That's the state with this week's presidential primary, in which candidates who have spent time in New York recently are currently running ahead, according to polls.

Hillary Clinton, who as a resident of Chappaqua in suburban Westchester County was elected the state's junior senator in 2000 and 2006, leads Bernie Sanders, who left his native Brooklyn for Vermont in 1968, 48 years ago. And on the Republican side, Donald Trump, who grew up in Jamaica Estates, Queens, and lives in a pseudonymous Manhattan skyscraper, has a "yuge" lead over John Kasich, native of McKees Rocks, Pennsylvania, and Ted Cruz, who grew up and lives in Houston.

Trump's lead in his home state is indeed enormous. He hasn't gotten 50 percent of the vote in any primary or caucus held so far. But he has been getting over 50 percent in every poll of New York Republicans conducted since March 2015, three months before he declared his candidacy. The only state where he has gotten comparable poll numbers is in neighboring Connecticut.

In a recent column I advanced the thesis that Trump tends to run best among voters with little social connectedness, that is, involvement in community activities. But New York, according to Harvard sociologist Robert Putnam, is not a state with particularly low social connectedness; it's roughly around the national average.

So New York tends to disprove my theory, unless there's something else involved -- which I think there is. Call it New York exceptionalism.

It's something that goes back to colonial America. In his 1988 book "Albion's Seed," historian David Hackett Fischer showed how different parts of the British colonies were settled by people from different parts of the British Isles with distinctly different folkways: New England by Calvinists from East Anglia; the Delaware Valley by Quakers and dissenting Protestants from the English Midlands; Virginia by Anglicans from England's West Country; and the Appalachian chain by Scots-Irish from Northern Ireland and Scotland.

Their folkways have persisted to this day and still are traceable in political choices. New Englanders felt the allure of Barack Obama to which the Scots-Irish were entirely immune. Virginians have been readier than Pennsylvanians to support military actions.

But as Fischer admits, his four categories don't include all Americans. African-Americans have obviously developed their own folkways. Another exception was New Netherland, now known as New York, which "combined formal toleration, social distance and inequality in high degree. ... The peculiar texture of life in New York City today still preserves qualities which existed in seventeenth-century New Amsterdam -- and Old Amsterdam as well."

New York has always believed in commerce and in tolerance, but has had little use for principle. Like Amsterdam in the age of Rembrandt, it is the greatest trading and finance system in the world, with a taste for high art and low life. In New York you are considered "old money" if you have held your fortune for 10 minutes.

New York was Loyalist during the Revolutionary War, pro-South in the Civil War. (Mustn't let principle get in the way of making money.) In the first half of the 20th century it was the fulcrum point of American politics, a target state in any close election split about equally between upstate Protestant Republicans and downstate Catholic Democrats, with key votes cast by Jewish immigrants left of both parties on both economic and cultural issues. This gave both parties an incentive to champion liberal policies not just in New York but nationally.

But by the 1960s New York became less pivotal. The state was overtaken in population by California (it now ranks fourth, behind Texas and Florida, too), and Jewish New Yorkers were solid Democrats, making New York's reduced number of electoral votes safely Democratic in any close election. New York is still a major media center, but it doesn't drive American politics as it did in the days of the two Roosevelts and Nelson Rockefeller.

It's a city that, like its son Donald Trump, loves winners -- winners like the New York Yankees, hated in much of America but loved in New York. Longtime Yankees owner George Steinbrenner and on-and-off manager Billy Martin may have been brash and boorish, but they were loved in New York. Hey, they were winners.

Trump speaks in the accents and cadences of New York -- not of the ancestral rich in Manhattan but in the upward strivers and figure-out-the-angles rich of the outer boroughs and Long Island suburbs. He talks of people "waiting on line" for his rallies -- a phrase that may have puzzled most listeners who thought he was referring to computers. That's New York talk: Sophisticated New Yorkers of my acquaintance are not aware that the phrase in the rest of America is "waiting in line."

Only 23 percent of New York state voters are registered Republicans, less than half the 49 percent who are registered Democrats. Perhaps this relatively small slice of the total electorate have less social connectedness than the average New Yorkers; there's not enough data to be sure.

That's a good haul for Trump, but it's likely not replicable outside New York, other than in Connecticut and New Jersey. Contrary to the song, if you can make it there, you may not be able to make it anywhere else.