Michael Barone
|
Posted: Feb 23, 2016 12:01 AM
Share   Tweet
The opinions expressed by columnists are their own and do not necessarily represent the views of Townhall.com. 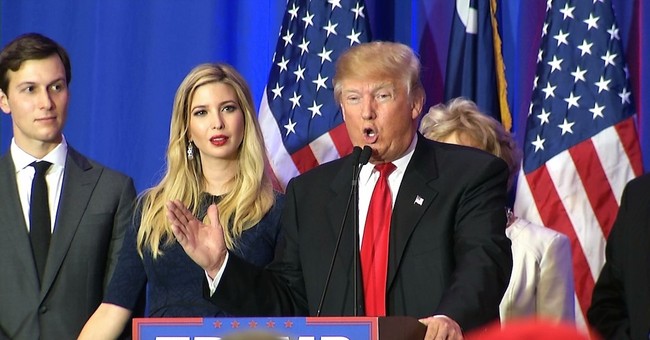 Trending
In 2008, Barack Obama's great victories in February primaries -- Georgia, Illinois, Maryland, Virginia and Wisconsin -- gave him an unstoppable delegate lead for the Democratic nomination. In 2012, Mitt Romney's wins in Florida (technically on Jan. 31) and Michigan sent him on his way to the Republican nomination.

This year, with the foreshortened schedule, there are a couple of February contests to go. But the Feb. 20 Republican primary in South Carolina and the Democratic caucuses in Nevada make it plain what this cycle will look like, even if it's not entirely clear who the winners will be.

Let's start with the Democrats. Hillary Clinton prevailed over Bernie Sanders, 53 percent to 47 percent, in Nevada. This was identical to her percent share of the vote there against Obama in 2008.

As in Iowa and by a wide margin in New Hampshire, Clinton lost among white voters. According to the entrance poll, she won because 76 percent of black voters backed her.

That's a lower percent than Obama carried in 2008 primaries, but it's more than she's gotten in some polls. It guarantees her victory in South Carolina next Saturday and many more wins on March 1 in Southern states with half-black electorates.

The internals are not quite a mirror of 2008. Some 80 percent of young voters are against her, and Latinos may have voted Sanders (though the entrance poll may be wrong on this). But Clinton runs better now among high-income Democrats (they don't like 77 percent tax rates) and post-graduates (probably thanks to her teacher union endorsement).

The upshot is the same: another long, hard slog to the nomination, but with a Clinton victory. And this time mirthless: Democratic turnout was down from 2008 in Iowa and New Hampshire, and Nevada super-analyst Jon Ralston says it sagged from 120,000 to 80,000 there. All this is assuming the FBI doesn't weigh in.

Republican turnout was up 22 percent from 2012 in South Carolina; likewise, it was up in Iowa (54 percent) and New Hampshire (14 percent). Donald Trump has established that there is a high floor on his support -- one-quarter in Iowa and one-third in New Hampshire and South Carolina. That's enough to give him victories in many-candidate contests.

But Trump may also have a relatively low ceiling. So his chances for the nomination are significantly below 100 percent. This will be tested in the Southern contests on Super Tuesday (March 1), the Michigan primary (March 8) and the winner-take-all (or winner-take-nearly-all) primaries in Florida, Ohio and Illinois March 15.

Marco Rubio rebounded from a poor New Hampshire finish to take second place in South Carolina. He is clearly the best-positioned challenger. He stands to inherit most of Jeb Bush's supporters, and he is widely acceptable to almost all segments of the Republican electorate.

Evangelical Christians accounted for 72 percent of South Carolina Republican voters. Among them Trump got 33 percent. Only 27 percent of the evangelical vote went to Ted Cruz, who has pitched his well-organized campaign specifically to evangelicals. That's not a good sign for Cruz in the March 1 Southern states. And Cruz got only 13 percent among non-evangelicals, who will be a much larger proportion of primary voters after March 1.

Delegate math hurts Cruz as well. He certainly can win some delegates in proportional-representation Southern states. But he will have rough going in winner-take-all Northern states and Florida.

Rubio beat Trump among college graduates and ran a strong second among voters under 45, those with high incomes and those calling themselves "somewhat conservative" or "moderate." Also, he got a solid 22 percent among evangelicals, only five points behind Cruz. If he can pick up Bush votes and sideline John Kasich, he has the potential to break through Trump's floor and perhaps surpass whatever turns out to be Trump's ceiling.

Endorsements by Rep. Trey Gowdy, Sen. Tim Scott and Gov. Nikki Haley -- a rainbow team -- surely helped Rubio in South Carolina, and others will come his way. Nevada Sen. Dean Heller chimed in Sunday, two days before his state's Republican caucuses. Trump is right that Rubio won't inherit all the dropouts' support. But it looks like a three-way Trump-Rubio-Cruz race right now, with Cruz the most at risk of dropping by the wayside.

So far only 1.2 million Republicans and 500,000 Democrats have voted in a nation of 323 million. But the shape, if not the results, of both parties' nomination races have been vividly clarified.