Will Independent Candidates' Support Dissipate in Kansas and South Dakota? 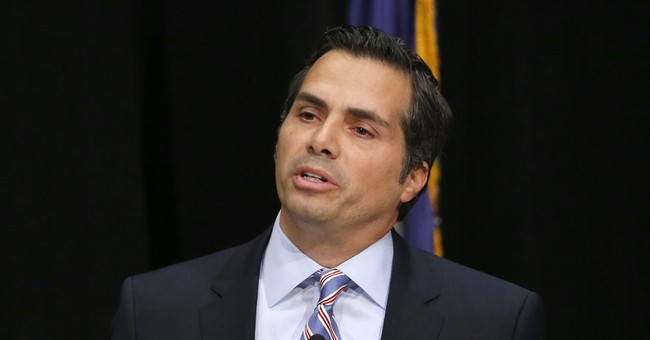 One question I'm asked in every electoral cycle is, "What are the surprise races in this election?" My answer in recent years has been, "There are no surprises, because any unexpected development becomes universally known in seconds."

There have been two such developments in this cycle. One in Kansas: the emergence about five weeks ago of independent Greg Orman (and the withdrawal from the ballot of the Democratic nominee) as a strong competitor against 34-year Capitol Hill veteran Republican Sen. Pat Roberts.

The other was in South Dakota: a poll showing Larry Pressler, a former Republican senator running as an independent, within the statistical margin of error of Republican nominee Mike Rounds and ahead of Democrat Rick Weiland.

Before these developments, everyone figured these were safe Republican seats. Now they look to be in jeopardy. Republicans' chances for the net gain of six seats they need for a Senate majority seem reduced.

Unless these polls are dreadfully wrong, there's no question that many Kansas and South Dakota voters have been changing their minds. That's in contrast to the relatively static preferences of voters in other states with serious Senate contests, where only a few percent seem to have been moving around.

Both these states' contests feature purportedly independent candidates. In September, Gallup reported, 58 percent of Americans said that a third political party was needed. So maybe it's not surprising that, when presented with a well-known independent candidate, many voters consider voting for him.

But will they still feel that way on Election Day? Recent elections in Brazil on Oct. 5 and in Britain in 2010 suggest that they may not.

In Brazil, Eduardo Campos, who had been running third with between 7 and 13 percent in the polls, died in a plane crash August 13. His vice presidential candidate Marina Silva, who had run for president herself in 2010, took his place and within days zoomed up to parity, at 34 percent, with incumbent Dilma Rousseff. Languishing in third place in every September poll was PSDB nominee Aecio Neves.

But on Election Day, Rousseff led with 42 percent. Neves was second with 34 percent and Silva a distant third with 21 percent. Those numbers were very similar to the first round results in 2010, when Rousseff had 47 percent, the PSDB nominee 33 percent and Silva 19 percent.

So election returns from four years before seemed a better predictor than the late August and September polls. And now Neves, who was running third just weeks ago, is leading Rousseff in polls for the Oct. 26 runoff.

Something similar happened in the 2010 British election. After the initial debate between prime ministerial candidates -- the first in British history -- support for Nick Clegg and his Liberal Democratic party ballooned. Incumbent Labour Prime Minister Gordon Brown and Conservative challenger David Cameron trailed behind.

But on Election Day most Britons voted either Conservative or Labour, as they have since 1922, with Conservatives gaining seats, as widely expected. Clegg's Lib Dems actually won fewer parliamentary seats than in 2005.

What this suggests is that voters may flirt with third-party candidates during a campaign but, when it comes down to voting, tend to choose between two major parties in pretty much the same proportions as they have before.

The American political system, more than Brazil's or Britain's, tends to strengthen this tendency. The Electoral College at the presidential level and single-member seats in Senate and House elections are formidable barriers to third parties and independent candidacies.

An independent presidential candidate who achieves critical mass can be competitive, as Ross Perot seemed to be until he withdrew suddenly in July 1992 or as polls in 1995 suggested Colin Powell would have been as an independent candidate. But usually support for third candidates dissipates by Election Day.

Will it this year? Perhaps Pressler, who voted twice for Obama, will displace Weiland as the chief alternative to Rounds in South Dakota. But he faces an uphill climb in a state that voted 58 percent for Mitt Romney.

In Kansas (60 percent Romney), Roberts has banked on that with a simple message -- I'm the real Republican; he's a Democrat. He's running even if you average the three polls conducted this month.

My guess is that oscillating polls will give way to familiar results in South Dakota and Kansas, as they did in Brazil and Britain. But maybe not. We'll see.