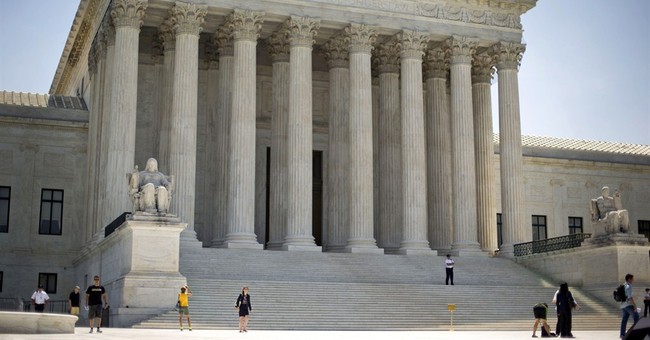 Seldom in American history has the Supreme Court unanimously rejected positions advocated by presidents' administrations.
But in this respect at least, President Obama has produced the fundamental transformation he promised in his 2008 campaign. Over the last three years, the Court has rejected Obama administration positions repeatedly in unanimous 9-0 decisions.
A review of these cases reveals much about the governing philosophy of the Obama administration.
One thing is abundantly clear, namely that this administration has a crabbed view of the First Amendment right of free exercise of religion. That is apparent not only in June's 5-4 decision ruling in Burwell v. Hobby Lobby that the Obamacare contraception mandate is trumped by the Religious Freedom Restoration Act.
It's even clearer in the 2012 Hosanna-Tabor Church v. EEOC case, in which the Court unanimously said that churches have the right to select their own clergy. The administration's position, that government could decide who counts as clergy, was described as "amazing" by Justice (and former Obama solicitor general) Elena Kagan.
The First Amendment freedom of speech is not highly valued by the administration either. In McCullen v. Coakley, decided last month, all nine justices overturned the Massachusetts law, supported by the administration, outlawing protests within 35 feet of an abortion clinic.
Property rights are also disfavored by the Obama administration. A unanimous court said the Fifth Amendment requires compensation when the government repeatedly floods its land in Arkansas Game & Fish Commission v. U.S. in 2012.
That year, the court in Sackett v. EPA also unanimously ruled that landowners could sue without risking a $75,000 per day fine to challenge a government order blocking construction in a supposed wetland.
And in 2013, the court in Horne v. USDA ruled that raisin farmers could sue for damages from confiscation of hundreds of pounds of raisins without first paying a $483,000 fine.
Nor is the Obama administration particularly respectful of the Fourth Amendment prohibition of unreasonable searches and seizures. In 2012, a unanimous Court in U.S. v. Jones rejected its contention that the government could attach a GPS tracking device to a car without a warrant.
That was followed by last month's Riley v. California, in which a unanimous Court rejected the position, supported by the Obama Justice Department, that police could search without a warrant the cellphone of a person under arrest. Chief Justice John Roberts pointed out that smartphones contain much more personal information than the crumpled cigarette package whose seizure the Court upheld in 1973.
A unanimous Supreme Court has also rejected Obama administration prosecutions that went beyond the letter of the law, including double taxation of a firm that paid foreign tax (PPL Corp. v. IRS, 2012), an extension of the statute of limitation against securities fraud (Gabelli v. SEC, 2012) and the "boundless reading" (in Chief Justice Roberts' words) of a statute implementing the Chemical Weapons Treaty to prosecute a woman who sprayed toxic chemicals on objects likely to be touched by her husband's paramour (Bond v. US, 2014).
If this is an administration that stretches criminal statutes beyond their actual words, it is also happy to ignore the words of the Constitution and of the Senate, as a unanimous court ruled in Noel Canning v. NLRB.
Obama claimed that he could nominate three members of the National Labor Relations Board without Senate confirmation under the Constitution's clause permitting such nominations during "the recess" of the Congress.
But he did so while the Senate was going into session every three days. "The Senate is in session when it says it is," wrote Justice Stephen Breyer.
The increased proportion of unanimous Supreme Court decisions -- the highest proportion over the last year since 1940 -- may owe something to Roberts' striving for unanimity and to justices' willingness to decide cases on narrow grounds on which all nine can agree.
But it also owes something to what Kagan might describe as the administration's chutzpah, a word she has used in decisions.
The cases cited here involve different principles, statutes and constitutional provisions. But in each, we see an administration inclined to lawlessness, to statism if not authoritarianism, a government that is bossy and eager to push people around.

Americans have evidently noticed. In a Rasmussen poll, a startling 44 percent of voters agree that Obama has been less faithful to the Constitution than most presidents. There's reason to conclude that all nine Supreme Court justices agree.