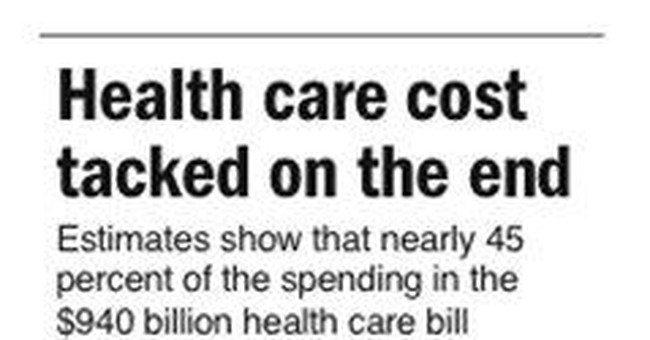 As this is written, the lobbying of House Democrats on the health care bill is going on apace, and every hour brings news of another no vote converted to yes, or a yes vote switching to no.

Speaker Nancy Pelosi and the House Democratic leadership is expressing confidence that the jerry-rigged bill they've put together will pass -- which is evidence either that they have the 216-vote majority pretty well in hand or that, like any party's House leadership, they're professing confidence to prevent a stampede against them. Republicans are saying the Democrats haven't gotten to 216 yet but admit they're getting close.

At a rally Friday, Barack Obama called on critics to stop talking about public opinion polls or the messy legislative process and to focus on the specifics of the bill. O.K.

The first thing to be said is that it would vastly increase government spending. Democrats have been focusing on the Congressional Budget Office's (preliminary) finding that it would reduce the federal deficit. But that's misleading because the CBO is required to assume that Congress won't increase the Medicare reimbursement rate for doctors (the doc fix) as it has done every year for a decade -- and as the Democratic leaders may be planning to do permanently later this year.

Over the last 40 years, federal government spending has hovered around 21 percent of the gross domestic product. The Obama budgets have pushed that up to 25 percent. The health care bill threatens to keep it in that vicinity indefinitely. And that, as the CBO has said, means deficits around 5 percent of GDP as far as the eye can see -- or higher taxes. Pelosi and other Democrats have been eyeing a value-added tax, i.e., a national sales tax.

The bill begins the march to higher taxes. High earners will pay 3.8 percent more in Medicare tax, on top of a promised increase, from 35 percent to 39.6 percent, in their income tax rate. Economists of every ideological stripe agree that raising taxes in a recession will slow or prevent recovery. The bill also creates a 3.8 percent tax on interest and dividend income above certain levels beginning in 2013. That's another growth-killer.

More important, in the long run the tax increases on high earners and supposed cuts in Medicare spending in this bill will not be available to solve the long-term fiscal problems of Social Security and Medicare. They will have been used up. What that will mean is this: A future Congress will have to scale back benefits or increase taxes on the middle class.

In his campaign and in the White House, Barack Obama has talked from time to time about solving the American government's long-term fiscal problems. The bill he is urging the House to pass will make that much harder.

This is unfortunate. Obama, elected with 53 percent of the vote and with large Democratic majorities in both houses, entered office better positioned to champion fundamental reforms in entitlement spending than any other president in the last three decades. The tenor of his campaign, and of the 2004 national convention speech that introduced him to the American people, suggested that he was disposed to do so.

On health care, he had an opportunity to address fundamentals by eliminating the tax preference for employer-provided health insurance established in 1943 that has made health care consumers and providers insensitive to costs.

There was even a bipartisan vehicle headed in that direction, co-sponsored by Democratic Sen. Ron Wyden and Republican Sen. Bob Bennett with a dozen bipartisan co-sponsors. Their idea was to provide universal private insurance coverage with premium support for low earners and to eliminate the tax preference whose benefits go disproportionately to high earners.

Obama chose to ignore this initiative and to hand off the task of crafting legislation to Democratic congressional leaders and committee chairmen. That process has produced monstrosities like the Cornhusker kickback that was in the bill before the House morphed it into an open-ended subsidy for high-tax, high-spending state governments.

The result is a highly unpopular piece of legislation that has gotten worse with each iteration, driving down the president's approval ratings and threatening an electoral disaster for members of his party next fall. The bill, if it passes, will threaten the economic recovery and make our long-term fiscal problems even harder to solve.