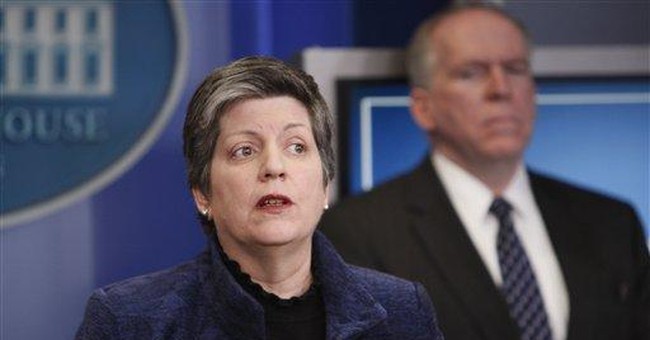 American politicians and public officials are not followed around by such aides. But the press and public opinion can and often do perform the function of Lord Copper's flunkie.

Such has been the case in the Obama administration's responses to the would-be Christmas bomber, Umar Farouk Abdulmutallab.

On Dec. 27, Homeland Security Secretary Janet Napolitano went on the Sunday shows and said, "The system worked." The response was loud and unmistakable. Up to a point, Madame Secretary.

The next day, Barack Obama briefly interrupted his Hawaii vacation and, before hitting the links, referred to the "alleged" bomber as a "suspect" and "an isolated extremist." The response was less strident but plain. Up to a point, Mr. President.

In "Scoop," Lord Copper seems unflummoxed when his flunkie responds to his declaration that Tokyo is the capital of China, "Up to a point, Lord Copper." On the Christmas bomber, Obama and his appointees have shown themselves capable of learning, albeit slowly, from the responses of the public and the press.

Thus, late in the afternoon on Jan. 7, the 13th day after Christmas, in a twice-postponed press appearance, we heard the president, Napolitano and terrorism adviser John Brennan admit that the system didn't work and that the would-be bomber was not isolated and was a very specific and familiar kind of extremist.

Obama confessed "a failure to connect and understand the intelligence that we already had." And the president who has junked the term "war on terror" admitted: "We are at war. We are at war against al-Qaida, a far-reaching network of violence and hatred that attacked us on 9/11, that killed nearly 3,000 innocent people, and that is plotting to strike us again."

The six-page summary of the White House review compiled by Brennan, rather than attacking the Bush administration's policies as Obama has so often done, noted that "the work by America's counterterrorism community has had many successes since 9/11." It confessed that analysts missed available "derogatory information" that should have put Abdulmutallab on the terrorist watch list and, astonishingly, that "a misspelling of Mr. Abdulmutallab's name resulted in the State Department not believing that he did not have a valid U.S. visa."

Left unaddressed by Obama, Napolitano and Brennan on Jan. 7 was the administration's almost instant decision to place Abdulmutallab in the criminal justice system, where he had a right to a lawyer who could advise him to remain silent, rather than keep him in military detention, as permitted by law. Abdulmutallab was talking to authorities when he was originally detained but, once provided with a lawyer, seems to have shut up.

That left the government unable to question him about what he did in Yemen, who recruited him, who had dispatched him on his mission and who trained him in the use of chemical explosives. We couldn't find out what he knows about paramilitary training facilities or the identities of the other terrorists who he reportedly said were ready to launch other attacks.

On a Jan. 3 Sunday talk show, Brennan, ignoring such considerations, said there was no downside in putting the terrorist in the criminal justice system.

Up to a point, Mr. Brennan.

It has been argued by no less a polemicist than Michael Kinsley that the decision was right because Abdulmutallab was in the United States. But it was not his intention to enter the United States (except as body parts), nor did Customs admit him legally to the country.

Not surprisingly, Obama has avoided this issue in public. On Jan. 7, he asserted that "the buck stops with me" and said, "As president, I have a solemn responsibility to protect our nation and our people."

Sounds good. But if you connect the dots, including the decision to give the Christmas bomber a lawyer and to allow him to clam up, the response has to be: Up to a point, Mr. President.