Young Voters Should Take Another Look at Obama 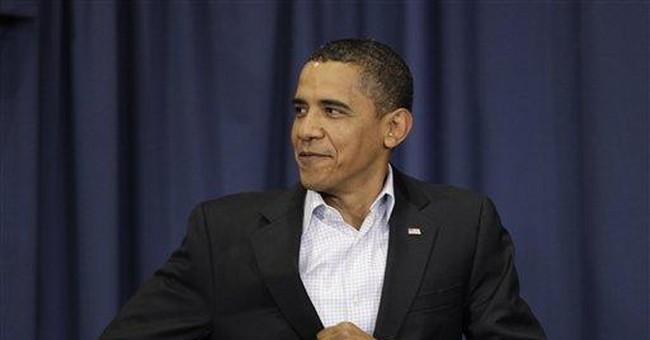 Congratulations. You have truly changed America. Those of you under 30 voted 66 percent to 32 percent for Barack Obama, an unprecedented margin. Your elders 30 and over voted for him, too, but only by a 50 percent to 49 percent margin. You converted a 2000-like margin to a solid majority and added significant numbers to the Democratic majorities in Congress.

You voted, as your candidate and our president said, for Hope and Change. But I ask you to consider whether the policies that the president has proposed and in some cases pushed through really amount to that.

I ask you to examine them through the prism of a book published in 1999, when most of you were too young to vote: "The Future and Its Enemies," by Virginia Postrel (an Obama voter, too, by the way). Postrel assesses policies based not on whether they are liberal or conservative but on whether they are dynamist -- promoting or leaving room for change -- or stasist -- tending to freeze institutions and people in place.

By my reckoning, the Obama policies are more stasist than dynamist. The unions' card-check bill, which he backs, would effectively abolish the secret ballot in union elections and impose mandatory federal setting of wages and work rules after 120 days of union-management negotiations.

Centralized mediators would determine your pay and work rules, modeled perhaps after those between the United Auto Workers and what we used to call the Big Three automakers. They have 5,000 pages of work rules. Don't change that light bulb -- you have to wait for the right union guy to do it. Is this the way to enable you to exercise creativity and initiative in your work?

Then there is the cap-and-trade bill to address what we are told is man-caused global warming. Noble intentions here. But it means paying more for electricity in the meantime for a very distant goal. A similar law in California is threatening blackouts. Renewables sound great, but the wind doesn't always blow and the sun doesn't always shine. How is holding down economic growth going to help you to shape your future?

And there is health care. The intention here -- Obama said it back in 2003 and hasn't denied it since -- is to send us down a road that leads to government-provided health insurance. His latest trial balloon is a centralized medical procedures board that would decide what treatments the government would pay for and wouldn't.

This would inevitably stifle innovations in drugs and medical devices -- stasism, not dynamism. Centralized government isn't fast on the uptake. I've lived nearly 10 years longer than my grandfathers did because I take pills that didn't exist when they were alive. Don't you want the benefits of innovations and discoveries, like tailored genetic treatments, which don't exist yet? Freezing health care is stasist, not dynamist.

Let's take a look also at foreign policy. You probably didn't like the Iraq war very much, although you might have noticed that we are headed for victory there now -- with Obama's help, I should note. But I suspect that you do want America to be a force for good in the world.

That leads me to wonder whether you were dismayed when Obama responded with stony indifference to the people in the streets of Iran protesting a fraudulent election and demanding freedom and democracy. Some called for the end of a regime that subordinates women and executes homosexuals, things I'm sure you don't like at all. Although Obama eventually indicated some sympathy, he seemed to regard those demands as a nuisance getting in the way of negotiating with Mahmoud Ahmadinejad and the mullahs.

The foreign policy experts call this "realism." I call it statist. It leaves America standing not for hope and change, but for the status quo and despair.

I am sure that you find it inspiring that America elected its first black president (I do, too). And I am sure you appreciate Obama's openness to alternative lifestyles, although you may have noticed that he, like George W. Bush and unlike Dick Cheney, opposes same-sex marriage.

The larger point is this: You want policies that will enable you to choose your future. Obama backs policies that would let centralized authorities choose much of your future for you. Is this the hope and change you want?

Your friend and admirer,