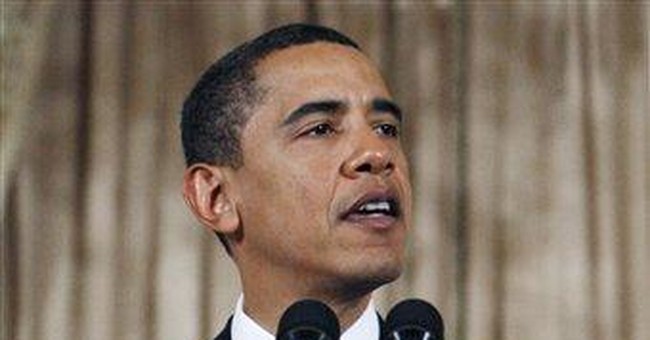 Last Tuesday, for the 22nd time in 220 years, Americans saw the peaceful post-election transfer of power from one political party to another. In our great outdoor national ceremony, scheduled for some reason on a day that is as likely as any other to be the coldest of the year, Barack Obama took the oath as our 44thth president and spoke to the nation for 19 minutes in a speech that was far more somber than the mood of the crowd of 2 million on the Mall.

At least one thing he got wrong. He spoke of "a sapping of confidence -- a nagging fear that America's decline is inevitable, and that the next generation must lower its sights." But a few hours before Obama spoke, pollster Scott Rasmussen reported that 48 percent of Americans believe the nation's best days are yet to come, while only 35 percent say they have come and gone.

Some of that optimistic plurality may come from voters convinced the nation was declining so long as George W. Bush was president but confident that it will rebound now that Obama is. Americans may be pessimistic about the next year, but we tend to be confident there will be progress over the next decade and the next generation.

But I think Americans will forgive Obama for striking a somber note; I think they're in a mood to forgive him for almost anything. The response to Obama since his victory in November reminds me of the response to John F. Kennedy after his narrower victory in 1960.

There are many similarities between the two. Obama is the first African-American president; Kennedy was the first Roman Catholic president. Both entered office young, physically graceful, articulate, charming. And both came to office at difficult times. Obama must make decisions about wars and a financial crisis no one fully comprehends. And, though many forget this, Kennedy faced difficult decisions: an economy that seemed to be faltering, which he pledged to get moving again, and a Cold War that had heated up in a Berlin crisis -- and would again -- and that nearly became hot when the Soviets placed missiles in Cuba.

Kennedy proved to be an extraordinarily popular president. His job approval ratings started off near 70 percent and stayed around that for his entire presidency, except that he lost the support of white Southerners after he came out for the civil rights bill in June 1963. His ratings remained high even after his first major and highly visible mistake, the Bay of Pigs invasion.

I think one reason for this is that he was a "first." Some 63 percent of white Protestants voted for his opponent in a nation whose culture, as the late Samuel Huntington put it, was and is Anglo-Protestant. Some 65 percent of white Protestants voted for Barack Obama's opponent. But I think a large majority of Americans want the first black president to be a good one and are inclined to keep believing that he is unless he does something that is utterly unacceptable to them (as Kennedy did to white Southerners).

We are all aware of what Obama called "our patchwork heritage," and are pleased to reward those who come from unusual ethnic backgrounds and have shown they can excel and transcend ethnic stereotypes in our Anglo-Protestant civic culture. I think Obama's job ratings are likely to remain very high for an extended period, as Kennedy's did.

An interesting question then is whether Obama will govern, as I have suggested he might, like Dwight Eisenhower, keeping an arm's length distance from his party and seeking a larger consensus. Some of his acts during his transition suggest he is so inclined, such as his inclusion of tax cuts in his stimulus package and his meticulous outreach to congressional leaders of the other party. Some of the things he has been talking about -- responding to the financial crisis, reforming entitlements -- as a practical matter require congressional supermajorities, if only to give all sides political cover.

His inaugural contained a few cheap shots to delight the left. "We will restore science to its rightful place." "We reject as false the choice between our safety and our ideals." But there were also words that should encourage the right. The market's "power to generate wealth and expand freedom is unmatched." "We will not apologize for our way of life, nor will we waver in its defense."

On Jan. 15, perhaps anticipating Obama's inauguration, British Foreign Secretary David Miliband rejected the idea that we faced a war on terrorism with "a unified, transnational enemy."

But Obama said, "Our nation is at war against a far-reaching network of violence and hatred." To whom his message was: "Our spirit is stronger and cannot be broken; you cannot outlast us, and we will defeat you." In his determination to protect the country, Obama may turn out to resemble his predecessor more than some Europeans would like.

Obama at close hand, as I have had the chance to see him earlier this month, is a man of supreme self-confidence who lays out long-term strategies and then executes them methodically, as he did in his campaign. Kennedy, from what I can tell, was, too; he started planning his 1960 campaign at his Thanksgiving dinner table in 1956. Kennedy made his mistakes -- some serious -- and Obama has assured us he'll make some, too.

But Americans in the 1960s were unusually indulgent of the grandson of an Irish saloonkeeper, and I'm inclined to think we also will be indulgent of, in Obama's words, "a man whose father less than 60 years ago might not have been served at a local restaurant."