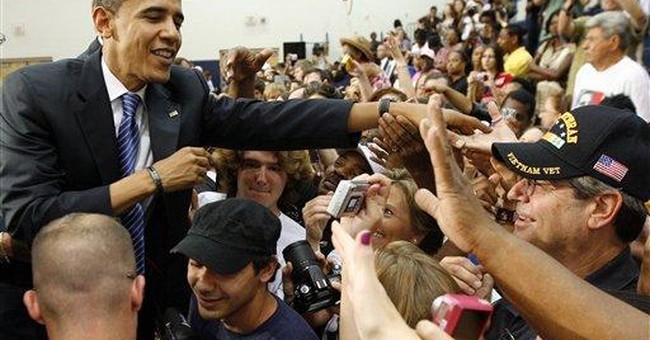 Just when you think you've got the presidential race figured out, something comes along to upend your carefully wrought conclusions.

Mainstream media provided lavish coverage of Barack Obama's trip abroad the week of July 21-25 and predicted he would get a bounce in the polls. Some of his supporters believe he has put the election away. Other observers employ the hackneyed and meaningless phrase, "It's his to lose."

But over the next several days, Obama bounced back down. Gallup showed him leading by a statistically insignificant 45 percent to 44 percent as of July 31. That's the closest the race has been in Gallup all that month. Rasmussen had him down to 48 percent to 46 percent on the same day. The world tour bounce has begun to look like a bubble.

Obama may have gotten some lasting benefits from the trip. He can now say that he has been in Afghanistan and that he has visited Iraq for the first time since January 2006. Iraqi Prime Minister Maliki's seeming acceptance of Obama's withdrawal timetable may have undermined John McCain's argument that an Obama presidency could lead to disaster there. And there are a substantial number of American voters who will be attracted by a candidate who seems to pass what John Kerry in 2004 called a "global test."

Still, the basic dynamics of the race haven't changed. Obama appears to have a small lead. But he doesn't come close to maximizing the Democratic vote. And there is some evidence that the balance of enthusiasm has shifted and that young people -- who seemed to turn out and vote for Obama in unusually high numbers in the primaries and caucuses -- are no long so enthusiastic about him.

The first bit of evidence comes from the July 10-13 ABC/Washington Post poll. It asked registered voters if they were "certain" to vote. Only 46 percent of voters under 30 said they were -- substantially lower than the 66 percent who said so in the ABC/Washington Post poll taken Feb. 28-March 2, at a time when Obama was enjoying a string of primary and caucus victories and before the sermons of the Rev. Jeremiah Wright were circulated on youtube.com on March 13. The 46 percent of young voters saying in July they were certain to vote was far lower than the 79 percent of 65 and over voters who said they were.

The second bit of evidence comes from the Gallup/USAToday poll taken July 25-27. This poll showed that when you narrowed the base of respondents down from registered voters to likely voters, John McCain was ahead 49 percent to 45 percent. That's a vivid contrast from the contemporaneous Gallup and Rasmussen tracking polls, and it was the first national poll since May showing McCain ahead.

The Gallup/USAT poll employs an unusual technique to decide who is a likely voter, and accordingly its results tend to vary more widely than other polls; political insiders tend to take its numbers seriously less as an indication of where the race is than as an indication of which candidate is benefiting, at least for a moment, from the balance of enthusiasm.

For most of this year, the balance of enthusiasm has been in favor of Democrats and Obama. Turnout in Democratic primaries was about 50 percent higher than in Republican primaries while both parties' nominations were seriously contested; Democrats generally and Obama in particular have raised far more money than Republicans; McCain voters have typically expressed less enthusiasm for their candidate than Obama voters have for theirs.

These poll results suggest that something -- the rantings of the Rev. Wright or Obama's skinbacks on issues like Iraq and terrorist surveillance -- has dampened enthusiasm for him, particularly among the young. The hope that his candidacy would benefit from a historically unprecedented turnout of young voters seems more audacious than it did a short time ago.

Nothing about an election is harder to predict than turnout, and experience shows that the balance of enthusiasm can change abruptly and in unpredicted ways. The poll numbers examined here are of course not the final word, or anything close to it, and this campaign could take many twists and turns before it is over. But you could do worse than expected the unexpected.