Clinton Has Only One Plausible Path to the Nomination 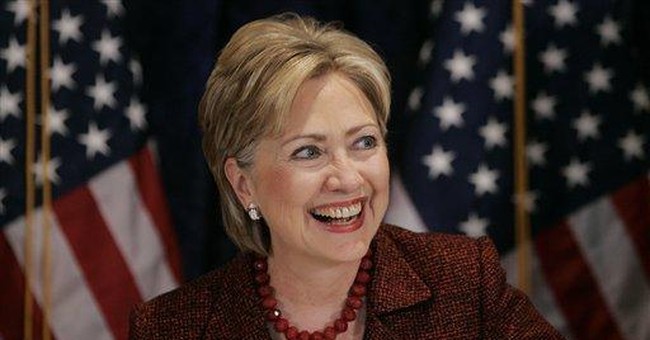 Barack Obama won 11 out of 11 primaries and caucuses from Super Tuesday to Feb. 19. Hillary Clinton won three out of four contests on March 4.

Suddenly, the look and feel of the Democratic presidential race were different. Yet the delegate count has changed hardly at all. Three victories in four states with 370 delegates netted Clinton only about a 20-delegate edge, leaving her still about 100 delegates behind. On the night that John McCain officially clinched the Republican nomination, the course of the Democratic race seemed less clear and more fraught with peril than ever.

Hillary Clinton appeared confident and vibrant on primary night, while Obama's graceful cadences sounded a little emptier than before. The storyline is changing, too. For the first time in a long campaign cycle, mainstream media have been pursuing stories that reflect badly on Obama: his close ties and property purchase with Chicago political operator Tony Rezko, now on trial in federal court; his chief economic adviser's purported assurance to a Canadian diplomat that Obama doesn't really mean he'll ditch NAFTA, as he was suggesting in trade-wary Ohio; Obama's pastor's recent award to the man Obama refers to as "Minister Farrakhan."

McCain takes questions until the last reporter runs out of things to ask. Obama terminated a probing press conference last week after eight questions with the lame excuse that he was running late. Obama's oratory has been compared to John Kennedy's. But he doesn't have Kennedy's gift for gracefully parrying hostile questions.

The March 4 results suggest Obama may not turn out to be as strong a candidate against McCain this November as he is in current polls. Clinton's "red phone" ad asked which candidate you would want to rely on to respond to a crisis at 3 o'clock in the morning. Obama's campaign said this was a Republican tactic.

Yes -- but Walter Mondale ran a similar ad against Gary Hart in 1984. It worked then, and it worked now. In Texas, where the ad ran, Clinton got a 60 percent to 39 percent margin among those who made up their minds in the last three days. That single ad may have made the difference in a contest she had to win to continue in the race.

In contrast, Obama's demagoguery on trade failed to attract white working-class voters: He ran far behind Clinton in Mahoning County (Youngstown) and the west side of Cuyahoga County (Cleveland). In southeast Ohio, settled originally by Virginians and still Southern-accented today, Clinton carried all-white counties with 70 percent to 80 percent of the vote -- more than she was carrying nearly all-white counties in central Texas. That raises doubts that Obama could run well in these counties, which provided critical votes in Bill Clinton's wins in Ohio in the 1990s and Jimmy Carter's narrow win there in 1976.

But Clinton is still about 100 delegates behind, and the Democrats' proportional representation rules make it impossible for her to close the gap in the remaining primaries. Her only plausible path to the nomination is to win a majority of super-delegates (party and public officials) and, perhaps, to reverse the party's decision disqualifying the Michigan and Florida delegations -- i.e., overruling the voters in one case and changing the rules after the game has been played in the other.

This might pass muster if the national polls show an unambiguous and substantial move toward Clinton. Otherwise, in more likely and ambiguous circumstances, a Clinton nomination will seem illegitimate to many who have been swooning over Obama and streaming into polling booths because he alone offers hope.

The March 4 exit polls show increasing percentages of Democratic primary voters unwilling to accept the rejection of their candidate. Both candidates have an incentive to attack on grounds that will weaken the other in the general election, as Clinton has already started to do with her "red phone" ad.

All of this is a windfall, surely, for McCain -- unless he forgets that his party is in trouble and that he needs to make an affirmative case for himself and his policies. And loudly enough to overcome the din as Clinton and Obama pummel each other.