Michael Anthony
|
Posted: Sep 30, 2017 12:01 AM
Share   Tweet
The opinions expressed by columnists are their own and do not necessarily represent the views of Townhall.com. 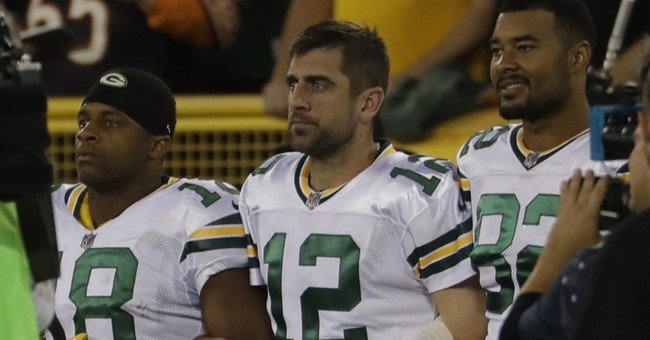 Does kneeling during our national anthem make one a son of a perverse and immoral woman, deserving to be fired, as President Trump suggested Friday night? Does standing during the anthem prove one’s patriotism? We can talk about the symptoms of America’s woes all we want, but only when we get honest with ourselves and each other will we have a prayer of dealing with the real root of what ails us: America is in the thick of a massive, and growing, humility crisis. North Korea aside, the pandemic of arrogance in our nation has festered into the number one threat against our very existence. If we don’t reverse this trend, it won’t be a nuclear bomb that melts us.

As always, humble courage always moves things forward – but it takes humble leaders to blaze a trail that inspires others to follow. Kudos to Aaron Rodgers, who inspired fans, fellow players, and coaches to push personal biases aside during last night’s Packers-Bears game. It was a chance for everyone to simply be . . . American.

We Americans need to rediscover the grease of life that has the miraculous power to pull us all together: humility. It’s what precedes unity. Unity, therefore, isn’t our fundamental need. Humility is because when we have it, the rest falls into place. When it’s missing, hatred and division swarm.

Rodgers showed us how it’s done. He didn’t wait for someone else to be the hope and change America needs. He clearly adopted the attitude that we all need to embrace: if it’s going to be, it’s up to you and me. Imagine if the rest of us followed his lead. We’d have a humble revolution. I think America could use a second revolution – not one fought with conventional weapons, but with the weapon of courageous humility. That’s the revolution we need. I say, bring it on.

We’re making progress. Courage and humility can win this war. Earlier this week, Alejandro Villaneuva walked onto Soldier Field, alone, before the Steelers-Bears game. The Afghanistan war veteran went against the flow of his teammates, deciding to stand while the national anthem resounded. Arrogant or humble? Compliant or defiant? In our divided nation, opinions abound. What’s the truth – and does it really matter? I think there are much bigger truths, more important points that should be gripping our attention.

In America, most have lost the ability to disagree with dignity, but Rodgers and Villaneuva demonstrated exactly how to be humble and courageous in the face of adversity. They expressed themselves diplomatically, without insulting anyone who may not agree with them. You and I can do the same. We must if we hope to turn things around.

Our nation needs an infusion of manners – now – with people rediscovering (and in many instances discovering for the first time) how to be kind, respectful and diplomatic in the face of disagreement. Thanks to Rodgers and Villaneuva, we have fresh, relevant examples.

We need a widespread, long-lasting movement of humility in America – and we need to stop waiting for it to begin with the politicians. It needs to arise at a grassroots level, around dining room tables, in houses of worship, in schools and neighborhoods across the land. We need to stop waiting for national change to begin in the White House. It needs to radiate from every house. It’s time each of us gets into the game.

The change America needs starts with the person staring back at you in the mirror. You and I need to see ourselves as ground zero in the new war on terror: arrogance, division, and fear.

Last time I checked, America was built upon the unalienable right of freedom of speech. It’s guaranteed in the very first of all the Amendments to our Constitution. Attempting to silence dignified statements of disagreement is entirely uncivil, unhealthy and un-American. We can agree to disagree, but we must always do so with the grease of life, humility. In the end, only the humble person has real courage, because any imbecile can express his or her self with a rock, stick or sharp tongue.

The free-fall that has become America, brought about by arrogance, needs to stop before we undo ourselves with an inside job. Without humility, we aren’t going anywhere positive. Pride, not unity, is our problem. Until we deal with the root, we’ll continue to eat the same old fruit. It’s rotten, unsightly, and out of step with everything for which a civil society is known.

United we stand. Divided we fall. Express ourselves; we must – with manners and dignity. Whether you believe we should be taking one knee or standing tall, it’s time for all Americans to bend both knees. It’s the one thing required in the quest for unity that is only wrought through genuine humility.