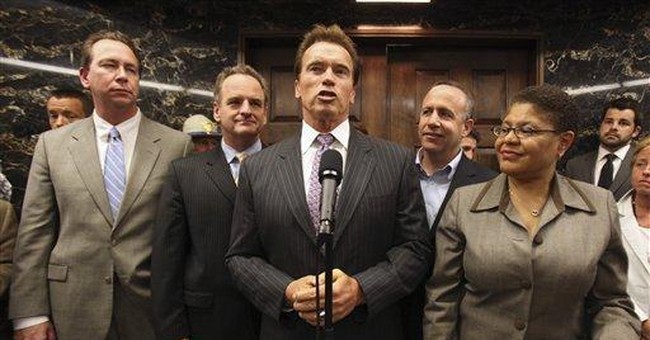 As pundits attempt to analyze California’s financial meltdown, there’s talk of how it has become an “ungovernable” state. Some blame the 2/3rds majority required for tax increases, others disparage the tome-length state constitution’s complexity, and still others fault the initiative process. The budget agreement this week between Governor Schwarzenegger and the Democrat-controlled legislature does nothing to extract California from the pit of ungovernability into which it has fallen.

What makes a state ungovernable? Something that is ungovernable cannot be controlled; it is ruled by chaos. Ungovernability is also characterized by lawlessness—ironic, considering California is swimming in the red tape and over-regulation of too many laws. However, in California chaos and lawlessness are not found amongst the people, but amongst those who are supposed to order society through lawmaking. The chaos is at the top, in the government itself. From petulant legislative leaders boycotting budget negotiations, to committee hearings in which legislators bicker about cow tail docking, to the state’s chief fiscal accountability officer spending millions on office furniture during the budget crisis, disorder is rampant in Sacramento.

Such chaos is the hallmark of a bureaucratic state. Bureaucracy by its very nature is ungovernable because its end goal is to preserve itself and constantly grow. Under Arnold Schwarzenegger, California’s spending has increased by over 32 percent. Yet Schwarzenegger came to office during a recall of his predecessor for spending too much. Instead, California’s spending has increased from $78 billion in 2004 to $103 billion in 2009. The leviathan’s appetite increases every year, and now with alarming capacity.

Amid the arguments over which programs to cut or what taxes to raise, there is an underlying, fundamental issue that only the honest and courageous will address head-on. California—and Washington, DC—has become ungovernable because there is a war being waged between two ideologies. One seeks to preserve the freest form of government in history; the other seeks to abolish that freedom. There can be no compromise in a war, only retreat.

War is defined by the lack of social order; it decimates a society. In many ways war can be characterized as ungovernable. In fact, war upends government in order to establish a different kind of governance. The victor determines what type of government will rule over the vanquished. In America, two forces battle for supremacy: socialists who believe government is the final arbiter of man’s destiny and happiness, and conservatives who believe, as America’s founders did, that government intrusion is the greatest hindrance to man’s prosperity and happiness.

Too often conservatives forget or pretend that we are in a war. They seek compromise and “bipartisanship” instead of standing against the tide of an encroaching nanny state. What they fail to realize is that each concession is another battle lost in the war. A regulation here, a small tax there; every capitulation cedes ground to an enemy who never compromises. It is conservatives and those who love freedom who have everything to lose, while socialists have nothing to lose and everything to gain in their fearless assault. Socialists go for the jugular, so must conservatives. If conservatives are to prevail, they must realize that when it comes to such crucial matters, there is no such thing as compromise, only retreat.

It is imperative that those who cherish our freedom refuse to cave. There is no such thing as a “moderate” in war; you’re on one side or the other. The same is true in this political battle we face. You cannot be moderate—either you defend the Constitution or you don’t. In fact, there are no “moderate” issues left for conservatives to throw to the socialist crocodiles in a feeble attempt to placate.

The only issues we now debate are the ones that strike at the very essence of our government structure: socialized healthcare, environmental regulations, Supreme Court nominees who favor international law over the Constitution, these are matters of the gravest importance. There are no petty, insignificant issues with which to trifle any longer. We are in a fight over the foundations of our government and freedom itself—and time is quickly running out.

For the sake of our nation, we must fight, and fight fiercely. There is no compromise, only victory or defeat.