Megan Toombs  |  Aug 18, 2017
The opinions expressed by columnists are their own and do not necessarily represent the views of Townhall.com.
Top Columns
Trending on Townhall Media 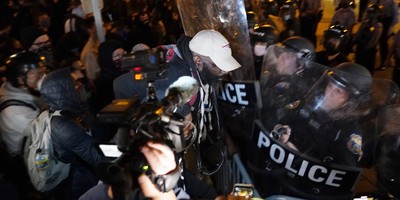 About a year and a half ago I was at an all-day event with friends that consisted of a lot of sitting around in lawn chairs, chatting, and eating too much food.

Since we were a group of my friends and their social acquaintances, it’s not surprising that eventually the conversation came around to a potentially divisive topic.

Someone brought up his recent trip to Northern Europe and how he thought it was (I’m paraphrasing) “so amazing that you never saw anyone there with a disability. They must be doing something right!”

This of course started a discussion on how Europeans haven’t somehow magically ended the occurrence of disabilities in the next generation, they’ve ended their births.

“Terminating their pregnancies,” as they like to call it.

And they’re doing it because a test showed that those children weren’t quite “perfect.” (A test that can be wrong, by the way.)

Now, I know many people disagree that abortion is murder. I know, I know, the laws of those countries don’t call it murder. But the Bible calls intentionally killing a human being in any circumstance other than self-defense, capital punishment, and just warfare murder.

And I’ll take the Bible’s authority over that of any nation’s laws. After all, German law made killing Jews in concentration camps legal during Nazi rule.

And as someone participating in this discussion pointed out, those Europeans who are aborting all those Down syndrome babies “are completing the work of the Nazis.”

I’m very hesitant to use the term “Nazi” or “denier” in any discussion. For the most part they’re pejorative terms used inaccurately to shut down discussion on any given topic.

Seventy-two years after our grandparents fought and died to stop evil incarnate from murdering Jews, Roma (Gypsies), those with Down syndrome and other disabilities, and everyone else they thought inferior including Slavic and African people groups, we’re having to fight the same fight in a different form.

A fight we’ve clearly been losing for some time as, according to CBS News,

The United States has an estimated termination rate for Down syndrome of 67 percent (1995–2011); in France it's 77 percent (2015); and Denmark, 98 percent (2015). The law in Iceland permits abortion after 16 weeks if the fetus has a deformity—and Down Syndrome is included in this category.

What has our world come to? Look at that precious girl!

Now, in all fairness to CBS, the article does present an opposing viewpoint to the murder of those with Down syndrome, but it is still heavily weighted towards the supporting side.

As Christians we absolutely must take a stand against this madness. Genesis 1:26–28 states:

Then God said, “Let us make man in our image, after our likeness. And let them have dominion over the fish of the sea and over the birds of the heavens and over the livestock and over all the earth and over every creeping thing that creeps on the earth.”

So God created man in his own image,
in the image of God he created him;
male and female he created them.

And God blessed them. And God said to them, “Be fruitful and multiply and fill the earth and subdue it, and have dominion over the fish of the sea and over the birds of the heavens and over every living thing that moves on the earth.”

Every human being is made in the image of God—including those with Down syndrome.