What Bloomberg Said About Rural Americans, Minorities Shows Why He Will Never Be President

Matt Vespa
|
Posted: Feb 21, 2020 6:00 AM
Share   Tweet
The opinions expressed by columnists are their own and do not necessarily represent the views of Townhall.com. 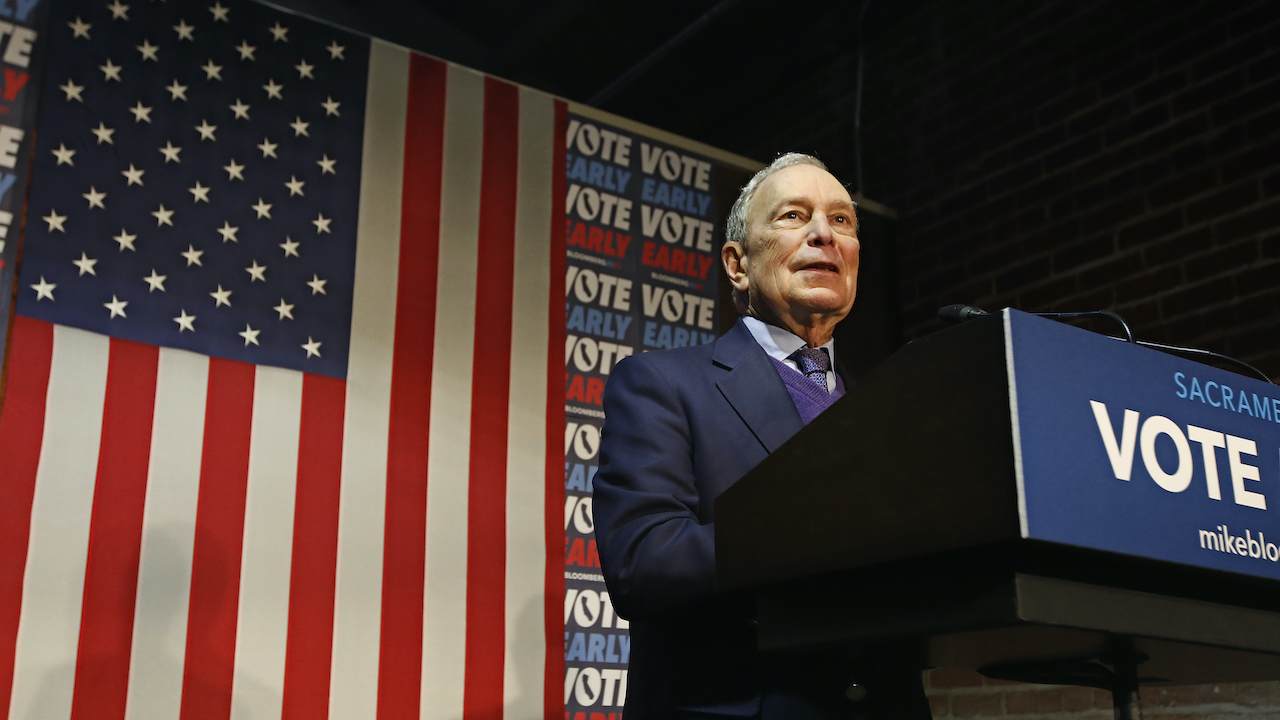 Former New York Mayor Mike Bloomberg has jumped into the 2020 ring, or is it a blender? He qualified for the Nevada debate, much to the irritation of the 2020 Democratic field, especially the Bernie Sanders campaign, who once again see the Democratic National Committee changing the rules to allow this billionaire onto the stage. He was trashed. Beaten bloody and the mayor seemed ill-suited to deliver knockout counterpunches. Surprisingly, the one candidate who delivered the most stinging attack was Sen. Elizabeth Warren (D-MA), who has been struggling since November of 2019. There was new life in her—and she thrashed Bloomberg with lethal efficiency.

MSNBC’s Jason Johnson: Mike Bloomberg had the “most expensive night in Vegas I’ve ever seen, he lost everything”pic.twitter.com/YuvG5k9eJ2

"It was a disaster."

"He was tone-deaf on issue after issue." pic.twitter.com/cC4eAD2T4j

Elizabeth Warren: I’d like to talk about who we’re running against: A billionaire who calls women fat broads and horse faced lesbians, and no, I’m not talking about Donald Trump, I’m talking about Mayor Bloomberg.#DemDebate pic.twitter.com/cNhC6yRc4W

Bloomberg came off as cold and unlikeable. It was something of a disaster that nearly 20 million people watched on live television. And that’s the thing here. We all think Bloomberg is a thing because the media says so. He isn’t. And for the Bernie Sanders supporters who have been charting the media bias against their guy—yes, establishment liberals do not like Mr. Sanders—I bet you were rather amused that The New York Times politics section was dominated by Bloomberg. Why? He’s not beating Sanders in the polls. And right now, Pete Buttigieg has more delegates in the 2020 race. It’s ridiculous. This whole Bloomberg moment is absurd. It’s not a moment. He will not be the 2020 Democratic nominee or the next president of the United States. He does, however, present a clear and present danger to the other candidates.

Via @ClareMalone, there are currently 8 stories on the NYT politics page about Bloomberg, and 0 about Buttigieg who (i) is actually on the ballot in the next two states and (ii) is in first place in pledged delegates so far.https://t.co/B0CzQnZQ2N

Former South Bend Mayor Pete Buttigieg and Sen. Amy Klobuchar (D-MN) are the last two candidates that form the cream of the 2020 crop right now. Bloomberg is the most direct threat to their candidacies. Decision Desk did a survey of 1,364 New Hampshire voters and found that around 20 percent would’ve voted for Bloomberg if he were on the ballot. What the race would have looked like if he decided to run earlier is unknown, but Sander still would have won. Again, this Bloomberg mania totally misses the point that Sen. Bernie Sanders, for better or worse, is the frontrunner for the 2020 Democratic nomination. Period. Who cares about Bloomberg’s low double-digit standing in the polls? Is he ahead of Sanders? Is he beating him anywhere? No. And Sanders is projected to have a solid night in Nevada and on Super Tuesday. Sanders has a path to the presidency. I won’t go into whether this is scary or not. It is scary, but we’re talking about the Democratic primary here only.

Can you win the primary if you bash blacks, make horrific remarks about women, and pretty much come off as the Democratic version of everything the progressive Left wants to upend? No. Bloomberg has done well in disparaging key voter blocs that are key in both rural and urban America. He denigrated the work of farmers, showing his snobby Northeastern elitism that sunk Hillary Clinton with working-class voters (via Newsweek):

The viral 58-second clip, seen more than 3.5 million times on Twitter alone since Friday, was lifted from a 2016 appearance at the University of Oxford in England in which Bloomberg, speaking to a group at the Said Business School, offered this succinct description of agriculture: "I could teach anybody—even people in this room so no offense intended—to be a farmer. It's a process. You dig a hole, you put a seed in, you put dirt on top, add water, up comes the corn."

…the full version of the video does not do much to clarify what Bloomberg is trying to say about the place of farming in the modern economy or demonstrate he understands how highly technological and data-driven agriculture is today.

After his synopsis of how to grow corn, Bloomberg went on to say: "At one point, 98 percent of the world worked in agriculture; today it's 2 percent in the United States. Now comes the information economy, and the information economy is fundamentally different because it's built around replacing people with technology...You have to have a lot more gray matter."

So, tens of millions of voters in rural America are just country bumpkins in the eyes of a 'President Bloomberg.' That takes middle America off the board. What about the urban bastions, where Democrats are dominant? Well, he only said that blacks and Hispanics don’t know how to find jobs or behave in the workplace. There’s the stop-and-frisk controversy. And then there was this blow-up where he told an employee to find “some black” to be a nanny to her child (via Huffpost):

Democratic presidential candidate Michael Bloomberg has long been trailed by accusations of promoting a frat house culture in the workplace, but documents in a 1998 lawsuit reported by The Washington Post contain particularly ugly remarks attributed to the Manhattan billionaire.

Around July 1993 at the financial data company he founded, Bloomberg allegedly browbeat a saleswoman in front of other employees. He’d just heard that the woman was having trouble finding a nanny, according to the lawsuit.

“It’s a fucking baby! All it does is eat and shit! It doesn’t know the difference between you and anyone else! All you need is some Black, who doesn’t even have to speak English, to rescue it from a burning building!” Bloomberg allegedly shouted.

Yeah, this is a problem. Bloomberg has remarks that alienate key groups on both sides of the sociopolitical divide. You cannot just win the White House by winning New York City, Mikey. You can’t. There is an America that exists outside of Manhattan. Also, did you not know that all of this baggage would be found. That all of your dirty laundry will be aired. This is a presidential campaign. Nothing is private. Both Democrats and Republicans have people who will find whatever you said that can be used against you from past interviews and if there is tape—you know it’s going to be discovered. It’s why this campaign’s start is so puzzling. Did they think that because Mikey isn’t Bernie Sanders that people would just forget he said all of these alleged things? No. The Democratic Party is left-wing. The social justice warrior ethos, the authoritarian ethos, is now how one should act if they are liberal. It’s the era of political correctness. It’s the era of stomping out things that are problematic if you’re a liberal. It’s the age of intersectionality. Can someone please pass the hemlock?

Bloomberg needed to have a solid debate. He needed to come off as different, a sound alternative to the left-wing candidates running for the office of the presidency—and he failed miserably on that front. He carried a persona that he was better than everyone on the stage and how dare they attack him. Mikey was too good to be on that stage debating with these…philistines or something. I don’t know. That’s the vibe I got. Meanwhile, Sanders is running away with this nomination. And that’s the cold hard facts that some in the liberal media, especially those at MSNBC, cannot seem to fathom. Bernie is the frontrunner. He will probably remain the frontrunner. Joe Biden is toast. And Pete, Amy, Bloomberg, and whoever is left will be fighting for the scraps. At the end of it all, even if Bloomberg manages a way to survive more contests, he’ll have to run the table of a large swath of them if he has a slight chance of beating Bernie. That’s not going to happen with how Democrats allocate delegates.

The sad part is that if Mike were running for mayor of New York City in this hypothetical scenario, I would be totally for him. He’s abysmal on gun rights, but this is New York. It’s a given their politicians are trash on Second Amendment issues and he would be contained to the city limits. He was pro-law and order. There was nothing wrong with stop-and-frisk, and he brought in billions of dollars into the city. He was also pro-school choice.  Mayor is one thing. President is another.

We already saw a left-wing mayor; de Blasio run and fail at this running president thing. Bloomberg will be no different. The man has nothing behind him. And at the end of the day, one of the main deciding factors for Democratic primary voters is whether ‘candidate x’ can beat Trump. It’s actually a sad point because, in reality, there isn’t a single person running who can beat Trump, but Mike Bloomberg is someone who most certainly cannot beat Trump. Some think another New Yorker is what’s needed to beat Trump due to toughness. Bloomberg, I guess showed toughness taking all those blows, but at this rate, the man is going to have the political equivalent of CTE.

He’s now a walking stereotype of what’s worst about America’s urban professional elite. He’s condescending. He’s a snob. And he’s someone who thinks the rules don’t apply to him, hence why he was squeezed onto the debate stage and Tom Steyer, another billionaire, failed to qualify. Left-wing Democrats see the ghosts of the 2016 DNC in these moves—and they’re not happy. So, let’s say Bloomberg does win the nomination, these folks aren’t voting for him. I think if Bernie fails to clinch this contest again, Democratic turnout might take a hit again, with some of these folks, like in 2016, voting for Trump out of spite.

Yet, for the Bloomberg folk out there, there is a silver lining. When given time, Bloomberg can deliver a nasty counterpunch. He did so against Bernie Sanders after he went on a long stump speech about why democratic socialism is awesome. Bloomberg hit Sanders for being a millionaire who owns three homes, despite his railing against income inequality and the billionaire class. The problem is it took Mikey virtually the entire debate to land one good punch. Sanders is running the table and after Super Tuesday, he’s really going to be in command of this thing.