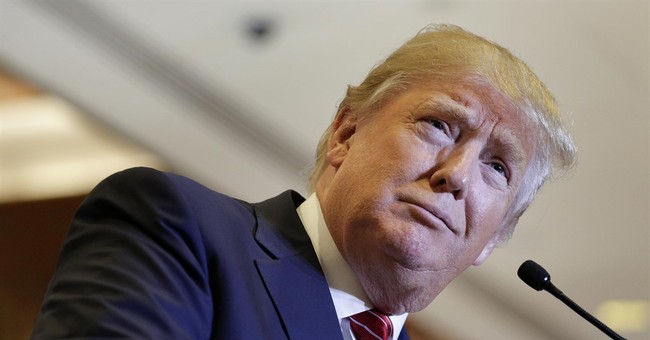 Trending
Every time they think they have knocked him down, Donald Trump comes up with a counterpunch that keeps the GOP establishment and traditional conservative pundits stunned and confused. Now they are being forced to attack the very bedrock of the Reagan economic legacy they so love.

After two debates Trump remains the dark-horse leader for the GOP presidential nomination.

But that lead is only with people who live in the real world. To the media elite and the DC bubble of politicians and pundits, he remains "a circus clown." Hence a slew of articles proclaiming Trump's decline in the polls, his high unfavorable ratings, his inability to attract the support of women and independents -- you name it.

But one thing is clear: Trump continues to lead nationally over his fellow Republican contestants. More importantly, he has sizeable leads in the early caucus and primary states. In the latest Iowa poll, Trump leads Dr. Ben Carson by 7 points. In New Hampshire Carson barely registers, with Trump leading second-place Carly Fiorina by 10 percentage points.

And in the South, where Trump has his strongest base, he has actually increased his support. Our early August InsiderAdvantage/Opinion Savvy poll for the Augusta Chronicle showed him with the lead in South Carolina at 31 percent, and the latest CBS poll indicates that he enjoys 36 percent support there, also an increase.

And the tax plan he unveiled this week might just give his efforts another boost.

In recent presidential cycles, it has been in vogue for many candidates to advocate a version of the "Fair Tax," a particularly well-thought-out plan developed by former Congressman John Linder and retired radio talk show star Neal Boortz. Had it ever been implemented, their plan would have revolutionized the federal tax system to the benefit of the nation.

But it is painfully clear that Congress has no intention of taking the bold move of trashing the entire tax code and replacing it with a plan that seems so simple, and yet would actually work.

Enter Donald Trump with the tax proposal he outlined this past week. First, to find any value in his ideas about tax reform, one must be willing to believe in supply-side economics. You know, the economics that Ronald Reagan espoused in the early 1980s. Of course Reagan was ridiculed for his economic beliefs then, just as Trump is being lambasted for his resurrection of the same philosophy today.

Again, Trump's proposal is relatively simple. He would exempt from paying any federal income tax individuals making less than $25,000 a year, or couples making less than $50,000. That might keep the lobbyists for H&R Block in an uproar, but once properly advertised in a general election, this proposal could win over a large section of usually Democratic-voting younger Americans, who would be spared the hassle and cost of paying taxes.

Basically, other income bracket rates would be substantially lowered from today's levels, as would the corporate tax rate. Large U.S. multinational corporations would pay a one-time 10 percent tax on the massive amount of money they have made overseas and on which they now are able to "defer" paying taxes on. Trump proposes to end that deferment.

The plan would also end many loopholes and reduce various deductions currently embedded in our Byzantine tax code.

Critics hit the plan mainly on one point: It raises too little revenue. Wow, it cuts off the blood that feeds the great leviathan that is our bloated federal government. How dare someone suggest doing that! That might put a crimp in the D.C. metro economy, given that six of the 10 wealthiest counties in America can be found there. But the rest of the nation would likely see businesses boom, because the tax system would finally give them a fair shake.

Trump's plan, which has received kudos from the likes of economist and commentator Larry Kudlow and conservative tax voice Grover Norquist, seems to resonate with many who live outside of the D.C. bubble. To them, supply-side economics is a good thing.

So while Trump's tax reform proposal may be picked apart by the political intelligentsia, it could turn their derisive term -- the so-called "Summer of Trump" -- into a multi-seasonal success.