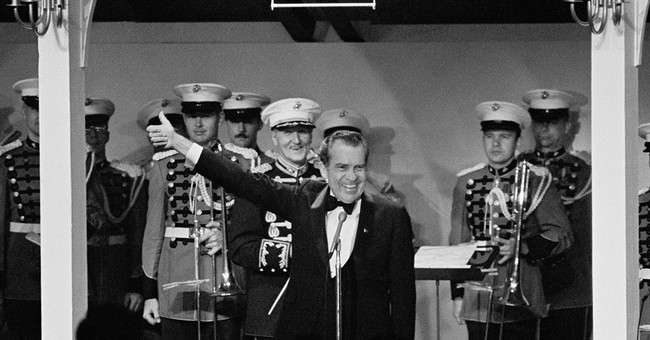 Many in the media are already castigating conservatives and Republicans for overreaching and overacting to what some are dubbing "IRS-Gate." That's to be expected, particularly when one considers that it is not The Washington Post, but The Wall Street Journal that now seems to be breaking some of the biggest stories among print media about not only the IRS's extra scrutiny of conservatives but a host of other issues related to the Obama administration.

For those who lived through Watergate but who were likely young and unable to keep up with every piece of that puzzle, here are some random similarities that don't necessarily make the two similar in facts as of now, but have an unusual similar pattern. And for those who later followed the House impeachment of Bill Clinton and subsequent acquittal by the Senate, there are some definite reminders about how to, or not, approach these sorts of things.

Many will argue that the Watergate scandal started with the Nixon administration (and President Nixon himself) having an almost childlike obsession with one enemy -- Teddy Kennedy. Some may recall that the Nixon organization was convinced that Kennedy would enter the 1972 presidential race and America's love of Camelot would pose Nixon's worst nightmare -- another defeat to a Kennedy.

Back then, obviously there was no Internet and no emails. But even in the early 1970s, personal information was gathered in questionable ways under the guise of national security. Code names, false names and all other types of "spy versus spy" activity took place for purposes of "opposition research." And, as has been noted by many others, the IRS was used as a political weapon.

Most of us watching the evening news in those years could hardly keep separate what activity was taking place by government officials as opposed to the sketchy group that made up Nixon's official and unofficial campaign operation.

There was an enemies list that came to light during the Nixon years. And the idea of playing hardball politics -- some might call it Chicago-style politics these days -- was the norm with the Nixon crowd. Oh, and by the way, Nixon had an attorney general who was stubborn, loyal to the president and tough, but he did resign early into Nixon's second term.

There is no evidence at this time that President Obama or any White House officials had any direct knowledge of the IRS targeting as it started or was actively ongoing. But just as with Watergate, there are so many loose ends and unanswered oddities that keep popping up, chief among them being why the former head of the IRS visited the White House so many times but could only provide the Easter egg event on the White House lawn as an example when asked in a recent congressional hearing.

And then there is the revelation of secret email accounts, and now news of huge requests for phone records have come to light. This is in no way a Watergate situation at present, but concepts like the "non-denial denial" seem to be back in favor, and one wonders when the tales of gathering information, disseminating it to political allies against political foes and targeting will end -- and where. Watergate, after all, was more a story of the cover-up of, it should be noted, illegal efforts to listen into phone calls, never authorized by the higher-ups it brought down later.

But here is a major warning for those who believe this current unclear puzzle will come together and become Watergate all over again: Handle with care.

The Republicans were making great legislative headway in Congress in the late 1990s, just as an investigation that began as an inquiry into a failed land deal in Arkansas developed into charges of perjury and obstruction of judgment over involvement with intern Monica Lewinsky and the impeachment of Bill Clinton.

The Clinton matter captured the nation's attention because of the story of the president's relations with an intern. But when Republicans decided to release a lengthy report from Special Prosecutor Kenneth Starr, one which included lurid and explicit details disseminated over an emerging Internet, the GOP leaders in the House watched public sentiment boomerang against them.

Sympathy for Clinton and, more importantly, outrage over the release of such sexually explicit information to the public enraged independent voters. Clinton's approval ratings went up, not down, and his acquittal by a democratically controlled Senate was assured.

We aren't at the point at which the White House and certainly not President Obama can be accused of anything, beyond the usual failure to meet Harry Truman's "buck stops here" philosophy. And where this story goes, no one knows. But the mainstream media are already starting to repeat the mantra that the GOP is overplaying its hand. That requires much reflection, many more questions and many more facts before it reaches the true "Gate" level.