It's Beck's Rally, but Hannity's War 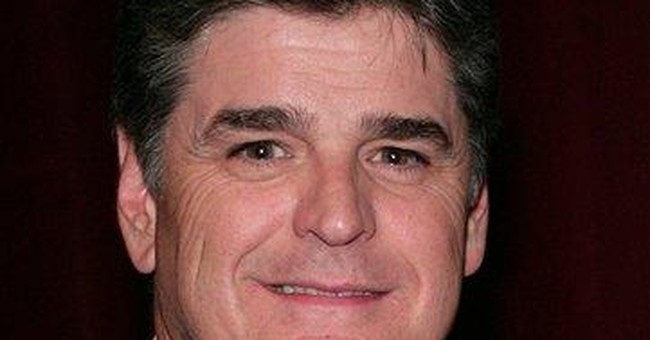 Mainstream media were taken aback when television and radio talk show host Glenn Beck recently hosted a rally on the National Mall in Washington, D.C. The throng of people assembled to celebrate and hear more about religious and civic values than about partisan politics.

Naturally, the likes of CBS News trotted out "experts" that declared the crowd to be about 80,000 people. Take it from someone who used to perch on the balcony of the Capitol to watch events: Even the folks at CBS had to be laughing among themselves at such an underestimation of the crowd's size.

We all know it was really hundreds of thousands. We know, too, that there was no politically charged rhetoric that day. Instead, the rally was a new high point in the meteoric career of the unusual Beck. The self-taught historian appears to be grasping for something beyond just politics. He was long dismissed by media elites as a flake. Now his detractors are starting to fear him as much as they loathe him. He's becoming a cultural force.

Yet none of this diminishes the work and influence of Beck's Fox News colleague Sean Hannity. In my 2008 book on the presidential race, I noted that in the closing days of the Obama-McCain race, then-candidate Obama seemed more obsessed with the comments and challenges coming from Hannity on his TV and radio shows than with anything John McCain had to say.

Hannity was warning that Obama's historical ties to extreme liberals -- now often called "progressives" -- did not bode well for the prospective make-up of the staff of an Obama White House, or of the overall tone of his administration.

As an objective pollster, I did as many did in giving President Obama the traditional "honeymoon period" of suspended judgment. Not Sean Hannity. As soon as the president took the oath of office, Hannity was questioning the agenda and the personnel decisions of the new administration.

Hannity's fans know that he is unabashed in his willingness to fight for a cause before it seems remotely winnable. Over the last year, he was among the first to see that congressional Democrats were in serious trouble of losing majority control in the House, and perhaps even the Senate.

The near-mystical aura surrounding Beck has been the subject of intense analysis and scrutiny. His mixture of historical context for contemporary issues, dedication to a higher cause and rigorous self-examination has made him an intriguing figure with a compelling message.

Beck's and Hannity's roles are not adversarial to each other, but complementary. Even as so many marvel at Beck's transcendence of politics, there is a need to recognize that Hannity shares traits with Beck, even as he fights for the more openly political causes he believes in.

Hannity came from modest beginnings. He worked a variety of jobs while taking college courses. In the 1990s, he landed in radio in Atlanta, where he was in competition with Neal Boortz, who is now one of the top radio talk-show hosts in America. (The two are friends today.)

For many, it's easy to envy Sean as what they would like to be. He's ice cream and apple pie made flesh. A good guy who just happens to do battle with Democrats and liberals as naturally as he breathes. That's what made him candidate Obama's unofficial nemesis in 2008, and that of the president and all Democrats now.

Of course, media stars like these are as much entertainers as they are political pundits. I can't imagine that any of them see themselves as single-handedly, seismically altering the American political and cultural landscape. But anyone who thought the ascendancy of Obama would mean a death knell for conservative talk radio and TV has to be flummoxed.

Beck with his peaceful rally. Rush Limbaugh with his daily dose of rhetorical combativeness. Boortz with his appeal to stubborn logic. It's clear that these and others comprise a collective voice that is again taking a conservative revolution mainstream. Consider that this week's Gallup poll showed that Americans prefer a Republican Congress by an astounding 10 percentage points.

Of these strong media voices, none has been as steadfast and confident in providing loyal opposition to the Democratic powers that be than Sean Hannity. The left's dislike of him is the proof. It's hard not to believe that Hannity's influence and accomplishments match those of Beck, or anyone.

This has been the year that Glenn Beck and those who attended his Washington rally humiliated mainstream media. It may soon be the year for Hannity to claim victory, too.