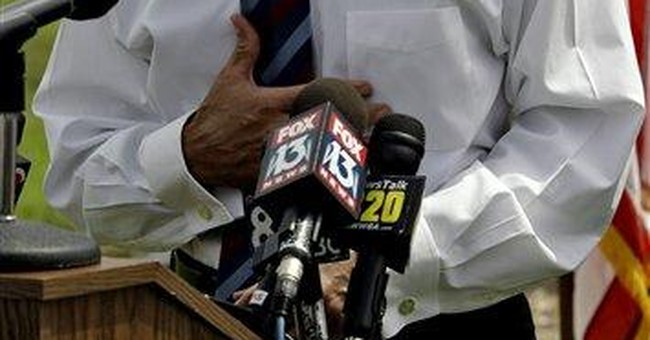 Several months back, I suggested that Florida Gov. Charlie Crist was the perfect moderate politician to help bring independent voters back to the Republican Party. Crist had just announced his plans to skip a second term as governor and instead seek the U.S. Senate seat held by the retiring Mel Martinez.

In that race next year, Crist is being challenged in the GOP primary by a young Cuban-American, the highly conservative former speaker of the Florida House of Representatives, Marco Rubio.

When that column was written, Barack Obama's approval rating was near 70 percent and moderation seemed to be the only hope for the GOP. Based on my own political experience, I still believe that a moderate and attractive Crist is the best answer for the Republicans for electability in Florida. But now I also believe Crist could be striding into one of the most expert political traps of recent years.

Let's set the scene. Charlie Crist is a friendly, attractive and exceedingly likeable man. He's also the man who was barely sworn in before he started dismantling parts of former Gov. Jeb Bush's policy legacy. Many a Florida conservative has lost faith in Crist because of a series of rather poorly advised political moves.

First, there was Crist's embrace of the Arnold Schwarzenegger-inspired salute to Obama's "climate control" initiative. That in combination with the governor's public appearance with Obama in support of the president's stimulus bill left many a hardcore Republican in the Sunshine State with a queasy feeling.

Make no mistake about it: Neither Jeb Bush nor many of the recently displaced conservatives in the GOP have any use for Charlie Crist. To them, he is a vapid, disingenuous, say-anything-to-advance-his-career sort of Republican. And there's at least some evidence that, yes, the charming Crist has a way of telling people what they want to hear, only to move on and forget that person, and maybe even what he said to them in the first place.

Now comes the curve ball. Mel Martinez had already made it clear that he would not seek re-election to the Senate in 2010. That cleared the way for Crist and his high approval ratings to coast right on into the Senate. But last week, Martinez threw a breaking pitch when he came out and said that he is going to leave the Senate early, this year. That puts Crist in a pickle: He must name a successor to Martinez -- to the office that Crist himself seeks.

It's not hard to figure out that a governor who is running for the same Senate seat that he must now fill by appointment can't choose himself -- nor someone who has ambitions beyond the end of Martinez's term. Crist has to appoint a pro-Charlie Crist "caretaker" of a senator.

But a year and a half in the U.S. Senate can do funny things to the mind. Having worked there years ago, I can attest that life is pretty good for senators. Should Crist encounter some major drop in popularity, might his caretaker change his or her mind about stepping aside?

More likely is that the powers behind Martinez urged him to put Crist in a box by forcing him to do something he usually doesn't enjoy: making a tough decision quickly. Recall that Martinez was born in Cuba, and he has strong ties to Florida's old-guard Cuban-American power structure -- a network that is no fan of Crist and a major sponsor of Rubio.

Based on what we've seen in elections across the nation following the November 2008 election, voter turnout has dropped off. Plus, the GOP appears to be moving back to being an activist right-wing party. If Florida's senatorial primary brings a low turnout of mostly hardcore conservative voters, and if Rubio's campaign can put together a credible fundraising effort -- likely to come from Washington, D.C., and other major centers of well-organized conservative fundraising -- then the Miami former House speaker could turn this contest into a horserace.

In a sense, this is all unfortunate for Republicans. Crist, after all, is far more likely than Rubio to win over independent voters -- Florida's key swing demographic -- in the general election. But conservatives are now energized over "Obama Healthcare." Too, they sense their new role as antagonists to what they see as the most liberal president and Congress in their lifetimes. Charlie Crist's quest for the Senate might be the ultimate test case of the direction Republicans want to go as they prepare for 2012.