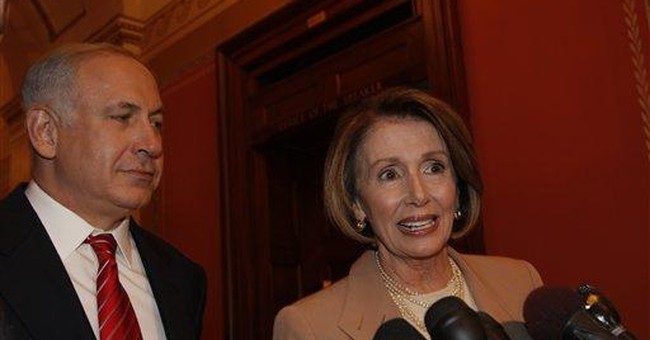 The decision by California voters to roundly reject a series of ballot measures, including keeping in place certain tax increases, could give us all a glimpse as to how Americans might just view the staggering deficits we are and will be incurring on the federal level.

When we hear of recommendations that minority-owned broadcasting companies and big-city newspapers should get bailouts, I'm sorry, we hit the absolute brick wall.

To the Obama administration's credit, there is some evidence that it has reached its own limits to handing out bailouts left and right. Much of the new talk comes from Congress, in particular, a House whose speaker has become the nation's new political lightening rod. Even a profile of Speaker Nancy Pelosi in the "new" and imminently cancellable (my wife makes those decisions, and she put the "thumbs down" on it) remake of Newsweek was not particularly flattering to Pelosi.

What Speaker Pelosi and others should likely do is take stock in what even Democratic voters in her own state did when presented with the bill to pay for endless programs and a massive state payroll. They balked. This was, the allegedly liberal bastion of America said, "enough!" The only measure that passed was limiting pay raises for elected officials in tough times. No shock there.

Let's assume for a moment that every proposal coming from the Obama administration is a true and noble one. Now before you start throwing rocks and other foreign objects, I'm just suggesting we test this without even concerning ourselves as to the validity of the alleged purpose.

There has been so much proposed so quickly that many of the initiatives are suffering blowback and the likelihood of serious watering down if and when they become law. And a vicious cycle is developing.

Efforts such as a "charge" for emissions of carbon and "greenhouse gasses" was originally meant to bring down pollution levels in a matter of years -- it was also supposed to create phenomenal revenue for the federal government. But even in the more liberal House the bill has had trouble making it out without giving energy-producing companies and others additional years and some degree of free "credits," which in turn means the revenue stream to "Uncle (now some say "Big Brother") Sam" will be substantially less. And the bill faces steeper opposition when it hits the Senate.

Then there's the semi-defined "healthcare" plan. Funding a government alternative for healthcare has led to concepts like a tax on sugar-based soft drinks -- an effort that has not met with much enthusiasm in most states where proposed in the past -- and has now morphed into a possible tax on alcohol. The fact is that none of these proposals would likely float the cost of a truly "universal healthcare" program.

The true whopper of a proposal is the administration's effort to tax "evil companies" that sell their products in other nations, but which, for whatever reason, avoid taxation of those sales in the United States. This might be the one stream of revenue the Democrats could sneak by the public. The administration has done a good job of couching these Fortune 500 companies and others as "using tax havens" and attempting to "manipulate" tax laws. As a pollster I can tell you that the PR campaign on this one will take real skill to avoid this potential proposal from taking some form of real and powerful law.

But here's the problem. Many of these corporations earn much of their income in countries with much fairer corporate tax structures. If they are penalized for their success overseas, guess what? They will move their complete operations out of the United States. Think I'm kidding? Just ask them. There go tens of thousands of jobs and more lost revenue.

We can't just blame Barack Obama or even the Democratic Congress for the current mountain of debt we are facing. But the administration and Congress needs to think long and hard about trying to solve all of the world's problems in just over 100 days. Once the costs hit home and the magic bullets to pay for them become unpalatable, even in big "Blue" states, the voters turn very nasty, very quick. And what ends up happening? The very budgets that got out of hand have to be cut.

So why must we whistle the tune "California, Here I … ," make that "'We' Come," while we can still attempt to avoid the same painful and potentially mortal fate?