Britain's Ban on an American Talk Show Host is An Outrage 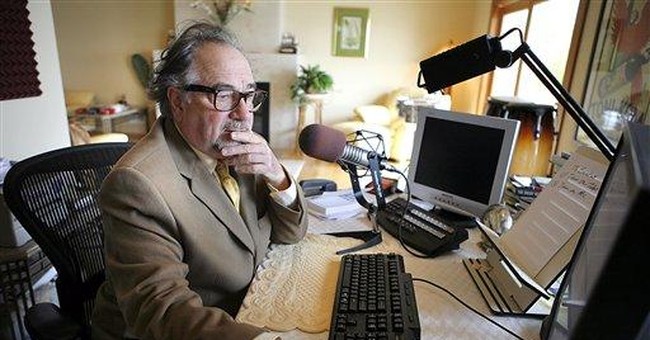 It's been decades since I was a student at England's Cambridge University. Since I graduated in 1984, I have returned only a few times to this wonderful country, which I love so dearly and whose people so warmly embraced me.

So I admit to shock over British Home Secretary Jacqui Smith's publication of 16 names of persons now banned from the United Kingdom for allegedly fostering extremism or hatred. My surprise and dismay was in the odd mixture of names on the list. On the one hand, there's a Hezbollah militant who served 30 years in prison for his role in the killing of four Israeli soldiers and a 4-year-old girl. On the other, there's American talk show host Michael Savage, who, among other provocative commentary, has called the Koran a "book of hate."

So militants who advocate or glorify terrorism are now somehow the equivalent of one of the most listened-to talk radio hosts in America? Surely this can't be coming from the great British nation I came to love; a country where great universities such as Cambridge and Oxford educated generations going back to the 1200s, urged students to explore and express divergent theories and views, even when some of those views were at the time generally considered to be unconventional, extreme and even dangerous.

I have a unique perspective on the situation, both because of the intense value I place on the intellectual contribution the British have made to our civilization, and because I listen on a regular basis to Dr. Savage's syndicated show.

I hope listening to "The Savage Nation" doesn't cause Britain to add me to its list of nefarious characters! But I'll run that risk because this is a situation that deserves an expression of true outrage on the part of all Americans, whether they agree with Savage's comments and positions or not.

Let's take a quick look at Savage. He was born under another name, but adopted the surname Savage, as is not unusual in the entertainment industry. National media generally try to ignore his existence, even though Savage has one of the three largest talk-radio listenerships in the nation.

Most likely media disdains him partly because he is both well educated -- he holds Master's degrees and a Ph.D. from Berkley -- and because his on-air personality is often gruff and cantankerous. Savage is prone to take on controversial social and political issues, often pushing things to the edge of opinion.

While some may find Savage's opinions offensive -- for example, he often acidly comments on what he refers to as his hometown of San Francisco's obsession with gay and lesbian issues -- he to my knowledge has never urged listeners to incite riots, harm other humans, commit terrorism or advocate other acts of hatred. Indeed, more often than not he bemoans the ineffectiveness of both Republicans and Democrats. He often drifts from political and social issues altogether to discuss everything from the food he ate the night before to some funny story from his childhood.

My purpose here is not to defend all of Michael Savage's opinions. Like many, there are times when I both agree and disagree with his views. Sometimes he makes me laugh, and sometimes he makes me cringe. But I will defend his right to speak freely, and I will passionately vouch for Savage that he is no threat to either America or Britain -- or to the nearest fly, for that matter.

I'm not alone in this opinion. Even prominent members of the American Civil Liberties Union bemoan the situation. They compare Britain's action with our own Patriot Act, under which the ACLU claims that the United States has banned some foreign nationals from America because of their ideologies and not because they are threats to our security.

As for Savage, he seems more interested in living a quiet personal life and spending time with his dog than he does with agitating for rallies and protests, much less to do physical harm to anyone.

Even if my judgment of Savage is off, the question remains: What does this British list say about a longtime allied nation to America when it decides to take unjustified measures based on expressions of free speech made in another country? Are we treading now on a slippery slope? Will there come a day when those who opine for a living find their words of commentary labeled "hate speech" by their own government? Talk of lists compiled by our own Department of Homeland Security suggests a hint of just such a risk.

It pains me to say this, but it appears that in this unfortunate instance, the true Savage Nation isn't Dr. Savage, but the United Kingdom, for its equating of a talk-show host with killers and advocates of terrorism.