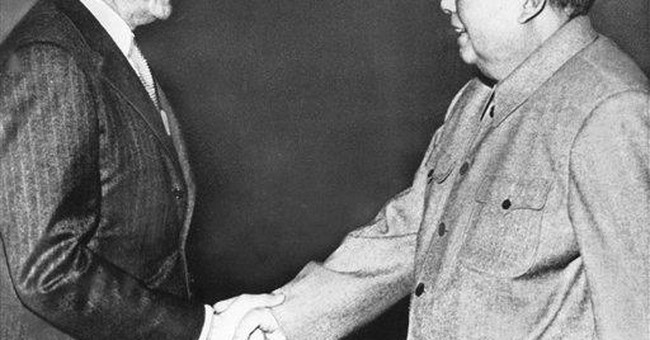 Hollywood tilts toward mega-action films with plenty of special effects but little in the way of special entertainment. That changes with the brilliant "Frost/Nixon." Director Ron Howard brings together a flawless cast with a team of exceptional writers to present us with a rare contemporary cinematic jewel.

And I feel somewhat qualified myself to comment on the essence of the film, given an almost "Forrest Gump-like" encounter I had with former President Richard Nixon.

Howard's film takes some creative license with history, but presents a compelling story of how British talk show interviewer David Frost -- a stateside media pop star in the '60s and '70s -- managed to bag a startling post-resignation interview with Nixon.

Frost is portrayed as a playboy whose career has hit the skids. He decides to revive it by raising the money to produce hours of interviews with Nixon and breaking new ground by selling the interviews through syndication.

Those who have read advanced copies of my new book, "Paranoid Nation: The Real Story of The 2008 Fight For The Presidency," will recall my coincidental encounter with Richard Nixon in 1983. The essence of that chance encounter explains much about Nixon, including the Nixon portrayed in the new movie.

In it, Frost conducts hours of mostly benign interviews with Nixon, who appears to charm Frost and to cast himself as highly likeable. Even Frost's own production team felt that the interviewer known for glib chitchat wasn't up to parry-and-thrust sessions with the likes of Nixon.

I won't give away the plot, but allow me to recount a critical scene. An inebriated Nixon phones Frost at his hotel room and starts rambling about what it is like to be "an outsider" and how, even in the ongoing interviews, either Nixon or Frost will "win." He basically challenges Frost to take him on.

The burr under Nixon's saddle is his deep-seated notion that anyone who isn't from an "aristocratic" background -- be it British or American -- necessarily must feel resentment towards their "betters," and probably have been treated badly by them.

Having researched Frost, Nixon asks him how badly he was treated as the son of a minister studying among the gentry at Cambridge. He picks at Frost, trying to see if he, too, shares the resentment for the so-called "elite" that haunted Nixon. Frost doesn't bite.

Fast-forward to real-life. It was 1983. I had worked as an aide to a Republican U.S. senator, but was completing my degrees at David Frost's same Cambridge University. Back in the United States on holiday, I was at a well-known private establishment when a group of prominent Republican fundraisers spotted me and insisted that they had "Dick Nixon" with them in the next room. I thought they were joking, but instead, as they opened the door, there he stood, larger than life.

They told Nixon that I had worked in the Senate, but was now at Cambridge, studying toward an advanced degree in International Relations.

Nixon didn't miss a beat. First the charm: "Most Americans think Oxford is the best but all the smart guys go to Cambridge." As with Frost, Nixon had charmed me in a flash. But in the course of our chat -- Nixon clearly enjoyed talking international relations -- he asked me an odd question in a newly sincere tone: "Are they treating you OK there?"

I guess with my Southern accent and lack of sophistication, he assumed that I, too, was a victim of highbred elitism.

Ironically, just like David Frost in the movie, my response shocked him. I felt totally at ease with the university and my many friends. Nixon shrugged off the subject and proceeded to allow me to question him for my dissertation. I had lucked out.

And therein lies the essence of this stellar film. Richard Nixon could be both a charmer and his own worst enemy. In displaying his insecurities about a real or imagined world of "elites," he was an early embodiment of the "Paranoid Nation" I describe in my book.

I guess the only difference between most people he met and me was that I still admired much of what the man had achieved and I appreciated that he tried so hard to be loved.

Take the time to see "Frost/Nixon." It will be as special as a chance encounter with the man would have been; and it will bring him to life far better than my meager words can alone.