A Word of Thanks for Newt Gingrich 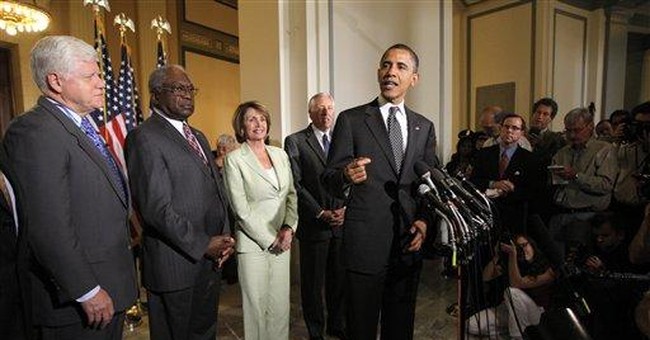 It's ironic that when former aides or colleagues of prominent Democrats opine on the presidential race, for example Donna Brazile, who appears both on ABC and CNN and ran Al Gore's 2000 campaign, they are never asked to do a mea culpa about potential bias or conflicts. They just comment away on Democrats, Republicans, issues or whatever they like.

That's fine, because for once I'm not going to try to explain my objectivity when it comes to a man I spent many years working with and have known since 1979. I've praised him and occasionally pushed him around a little in past columns. He doesn't like that pushing around bit too much, but he's tough, and I have a job to do.

If John McCain and the GOP want to thank someone for helping turn around what seemed a dead-in-the-water campaign in a matter of weeks, they can thank former House Speaker Newt Gingrich. Gingrich chose not to enter the 2008 presidential race, but his decision to use his "think tank" American Solutions organization to push for a "Drill Here, Drill Now" petition back in the spring is likely the source of John McCain's miraculous rebound in the polls.

It was the former speaker who zeroed in on this popular message while Republican House and Senate members and McCain seemed to be drifting all over the place in an attempt to find a "sweet spot" with the American electorate. During the summer, Gingrich met several times with the Republican House Conference and encouraged them to dig in their heels by demanding that the Democratic leadership return to Washington and address the issue of providing states the right to determine if and where exploration for oil and natural gas can take place.

Certainly John McCain deserves credit for pushing the issue, and governors like Florida's Charlie Crist helped McCain along by saying they support such a move. But make no mistake about it, it was Gingrich who was pushing this issue even before gas prices had hit the roof and the issue of energy became the top issue among voters.

House Republicans have openly given the former speaker the credit for energizing them at a time when all hope seemed lost. Now they have forced House Speaker Nancy Pelosi to reconsider her opposition to consideration of legislation that might, at the very least, begin the move toward expanded domestic drilling.

A reality check tells us that no matter how fast Congress might move, "drill now" won't mean new sources of oil for some time to come. But the mere potential for this longer term solution, or at least major part of the solution, has had an effect on those who saw that future as hopeless. Gingrich knows if you don't strike during a crisis and harness public opinion, then you lose an opportunity that may well set any hopes of expanded domestic exploration for energy sources back many more years.

I'm no stranger to hearing Gingrich's "big ideas." Some over the many years that I've known him have seemed esoteric, a few even plain goofy. And don't worry, I never hesitated to tell him so, and he never hesitated to ignore my comments.

But I've been a witness to plenty of "big ideas" from Newt Gingrich that not only were significant, but long lasting. Consider the Gingrich-led effort for true welfare reform in America. Even Barack Obama in last week's "faith forum" stated that he had changed his mind over the past 10 years from opposing welfare reform to supporting it.

Let me assure you, welfare reform was born in the cramped offices of a relatively new Congressman Gingrich in the early 1980s, reworked and re-examined by a fast rising and more influential Gingrich of the early 1990s, and was given birth to by Gingrich and his colleagues once he became speaker.

And Gingrich's influence on the policy debate in this election is likely not through. His Center for Health Transformation has promoted numerous innovations related to healthcare. And with the issue ranking as one of the other major ones on the minds of voters, I'll be shocked if Newt doesn't add a significant push toward health care reform to his agenda. Now the question is, will the McCain team embrace Gingrich's health related agenda, or will Obama decide not to wait another 10 years to ride one of Newt's "big ideas"?