Finally - the GOP is Fighting 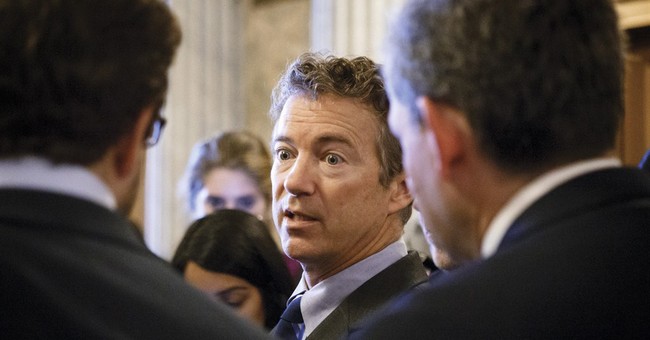 There is always a tension between the practicality of winning elections and the desire for ideological purity.

But for many conservatives across the country, in recent years we have been asked to support mainstream candidates who talk a good game but then don't fight for conservative principles.

The litany of failed mainstream presidential candidates on our side of the aisle tells the tale: President George H.W. Bush (reelection), Bob Dole, John McCain and Mitt Romney. These are all honorable men, but they are all middle-of-the-road, mainstream, losing candidates.

I am not naÃ¯ve. I worked in the U.S. Senate for four years.

I understand that serving in the congressional leadership changes your perspective, forcing you to be responsible for the result of legislative actions in a way that an individual congressman or senator is not.

But for too long, conservatives have seen the Republican Party roll over, always with the next election in mind. The thinking goes: We have to win next time, so we can't risk losing now.

But we have been losing next time.

What good is 'playing for next time' when our track record of 'next time' is pitiful?

The government shutdown is doubtless a political benefit to the Democrats, which is why they did virtually nothing to stop it. No negotiation. No conference committee. They offered nothing. President Obama cynically thinks that a shutdown will lead to a massive change in the political dynamic and make it possible for Democrats to win back the House of Representatives for his final two years in office.

All Republicans agree that our spending is out of control, that there is no current plan to sustain our insolvent entitlement system, that our $17 trillion national debt is immoral and threatens our future, and that ObamaCare will adversely affect our healthcare system and our economy at a time when our economic growth rate is anemic.

It remains probable that the 2014 political year will be very positive for Republicans. The Democrats are facing headwinds, and the second midterms in two-term presidencies are almost always bad for the majority party.

Meanwhile, Obama's approval ratings are among the lowest of his presidency.

In destroying Romney in the 2012 election, the Obama campaign won a second term. But they also ruined Obama's positive image and once-hopeful message, and the result is that he now has no mandate for the second term. A majority of the public disapproves of ObamaCare. His agenda on guns and immigration is going nowhere. His environmental agenda is dead on Capitol Hill, and he can use only limited executive branch maneuvers.

This is why he wants a shutdown. He needs a new Congress to revive his agenda. He knows the previous political dynamic would not provide such an election, and he is now enabling a shutdown by not preventing it or providing any leadership whatsoever.

I can understand why Obama would resist defunding or repealing his signature domestic accomplishment.

But why are Democrats exempting Congress, their employees and White House staff from ObamaCare while the American people aren't exempt? Why won't the White House accept the repeal of the medical device tax, which has had broad bipartisan support? How does the White House justify unconstitutionally giving big business a one-year delay of the ObamaCare mandate but they choose to shut down the government when the same one-year delay for individuals is passed by House Republicans?

Senate Majority Leader Harry Reid is the least effective Senate majority leader in my lifetime. He would be a better fit as Democratic National Committee chairman, where his irresponsibility wouldn't harm the country. He refuses to pass appropriations bills, take up and amend House-passed legislation, negotiate on major legislative items or bow to the political reality that the Senate requires 60 votes (and he has only 54) and the House majority is Republican.

Nobody wanted a government shutdown - except the White House.

Fine. It's time Republicans stand up and fight, whether they want to or not. People are hurting, and the country is headed in the wrong direction.

Obama cares only about 2014. It's time Republicans fought for conservative principles today and consider the politics of 2014 later.