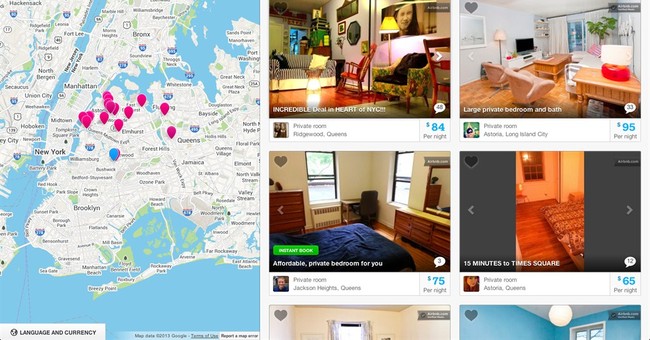 This is not the first time Airbnb has faced harsh criticism. Instead of harassing Airbnb and other “sharing economy” companies, regulators ought to find ways to allow for these popular innovators to compete and contribute to local economies.

Airbnb agreed to hand over company data to Schneiderman in May 2014 after receiving a subpoena. The data related to listings which involved "A private stay, i.e. where the host listed an 'entire home/apartment' or a 'private room' for rent," and either "A rental transaction for a stay in New York City of less than 30 days" or "A rental transaction for a stay in a unit in New York City of between 30 and 180 days that did not qualify for the de minimis exception for hotel room occupancy taxes."

Airbnb did not release information on rentals that did not meet these criteria, and the report released by Schneiderman states that it is "unclear how many transactions are excluded from the Data."

According to the report, 72 percent of the unique units that were used as private short-term rentals violate the Multiple Dwelling Law (MDL) or New York City regulations that forbid using non-residential buildings for housing purposes.

An Airbnb spokesman told The New York Times that, given the host of regulations related to housing in New York, it is impossible to make the 72 percent claim:

“Every single home, apartment, co-op and living space in New York is subject to a myriad of rules, so it’s impossible to make this kind of blanket statement,” the spokesman said. “That kind of uncertainty and lack of clarity is exactly why we’re advocating for clear, fair rules for home sharing.”

It is worth remembering that Airbnb announced in September that it removed more than 2,000 New York City listings that "weren’t providing a quality, local experience to guests," so some of the listings and hosts mentioned in Schneiderman's report are almost certainly no longer available.

Schneiderman announced that an enforcement unit will be formed and tasked with shutting down "illegal hotels," and Airbnb has expressed a willingness to work with officials in order to clamp down on "bad actors."

Airbnb is already facing opposition in New York City from the Share Better campaign. The campaign is made up of hotel industry representatives, local politicians, and activists who are making dubious claims about the effect Airbnb is having on the affordable housing situation in New York City.

News of the report comes shortly after local lawmakers in San Francisco voted to legalize Airbnb. Although the San Francisco legislation includes restrictions on Airbnb hosts, the company welcomed its passage ­­— which shouldn't be surprising, since Airbnb would prefer to operate in a legal environment rather than one filled with regulatory uncertainty.

Airbnb has already expressed the desire and the willingness to crack down on hosts who are not providing the sort of experience they want their customers to enjoy. Airbnb has proven popular not only in New York City but in many cities across the world, and New York lawmakers and regulators ought to avoid being heavy-handed in dealing with Airbnb. San Francisco has already demonstrated that aggressive enforcement of outdated regulations is not the only way to deal with the emergence of popular companies like Airbnb.