Matthew Betley
|
Posted: Feb 10, 2019 12:01 AM
Share   Tweet
The opinions expressed by columnists are their own and do not necessarily represent the views of Townhall.com. 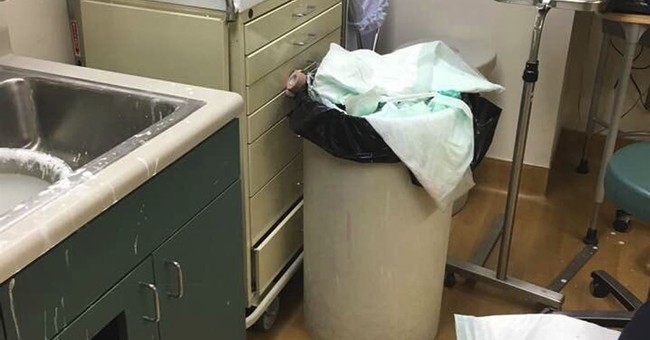 As a former Marine with a bit of a tough-guy persona (even if I am self-deluded), I lift weights, run, or bike every day.  I figure that if I write intense, action-packed roller coaster rides for a living, I better not look like a beta male in Silicon valley growing pale and weak on a diet of vending machine heart stoppers.  When I’m healthy, knocking out a 45-minute high-intensity interval hill class on my Peloton treadmill is a breeze.  But when I get sick, thanks to the permanent lung damage I suffered in Iraq from 2006 to 2007, walking up my inclined driveway feels like I’m cresting K2.  And even though I’ve suffered with this condition, a type of reactive airway disease that results in the chronic bronchitis type of COPD, the VA still has yet to add this to my compensation claim.   And here’s the kicker – they’re the ones who diagnosed it in 2010.

When I took an oath to defend the Constitution as a Marine officer, I knew that could mean laying down my life in combat to preserve the American way of life and all that comes with it, good and bad.  But as an extremely fit 27-year-old at the time, I never considered the lifelong health implications.  And because I intentionally chose a combat arms MOS that increased my chances of seeing conflict, especially post-9/11, the only thought I ever had while on deployment was whether or not I’d make it home, not what my health would be like when I did.

In 2006, I deployed to Camp Fallujah, Iraq.  Because of the role I had, I was mostly on the base.  I traveled around Al Anbar Province at the height of the Sunni insurgency, but my duties were on the main camp.  As a result and as part of my Be Prepared motto, I ran every day and stayed as fit as possible, using the perimeter of the camp as my trail.  And every day, I passed the burn pit that was a noxious sore on the base.  The smell was unmistakable, acrid, chemical, pungent, and foul, and it often wafted over the entire camp.  But none of us gave it a second thought.  We were more concerned about the Marines and soldiers that we were losing as casualties on a daily basis.  Al Anbar Province was not a good place to be in 2006.

Before I redeployed, I received a brief in the camp chapel on the tests that they’d run on the burn pit.   They assured us that the fumes were not harmful.  It was full of statistics, charts, and graphs from the camp surgeon.  And it was mandatory, which should’ve clued me in on CYA-aspect to it.  And then I came home, having fulfilled my very small part in Operation IRAQI FREEDOM.

And within two months, my health issues started.  I came down for the first time ever with pneumonia, and I was out of work for more than two weeks, which for a fit Marine officer, was unheard of.  When I recovered, I started suffering coughing spells where I coughed up phlegm when I wasn’t sick.  On top of that, I started experiencing an ear issue where my equilibrium felt off, like I was still on ship, and my ears wouldn’t pressurize normally.  It took a full 3 years of every conceivable test – spinning chair in the dark, hot and cold air blown into the ears, multiple pulmonary function tests (trust me; these are not fun) – and chronic illnesses before a VA pulmonologist finally diagnosed me with the chronic bronchitis type of COPD.  To my face, he told me pointblank that it was a result of whatever I was exposed to, that it was irreversible, and that any time I got sick with what would be a normal cold for most people, for me, it had a good chance of triggering this debilitating condition.  And unfortunately, on this point, that VA doctor was absolutely right.

Over the past ten years, I’ve missed hundreds of hours of work, have had to use personal leave for illnesses, and even had to apply for the Family Medical Leave Act to cover me when my condition is triggered.  As a prideful former Marine, I loathe the fact that there’s nothing I can do about it, that I can’t fly anymore because of my ears (which is why I’ve declined certain book tour events and speaking engagements that were too far to drive), and that I’m out of commission when I’m sick.  It’s a psychological kick in the teeth, but then I remind myself that it could be worse, a lot worse.  The friends I lost in Iraq, the memorials I attended for fallen Marines and soldiers, and the grievous injuries to veterans I currently know always put my situation into perspective.

When I separated from the Marine Corps, the VA compensated me for numerous injuries and other issues typical of serving in the military.  But it was only in February 2018 that I realized that the most serious issue I have, a chronic condition they tied directly to my service and that they diagnosed, was not included in my dispensation.  So I called the VA, and that’s when the real fun began.

The VA asked me to file a supplemental claim, which I did.  I also provided every medical record from my current doctors, my government agency, and submitted a detailed, written account to ensure that they understood this started in 2007 and that they’d already diagnosed it.  They told me they’d schedule an assessment.  (First note of caution, when the VA schedules an appointment for you, under no circumstances should you miss it.  If you have to drive through a zombie apocalypse or Antifa protest to keep the appointment, do it.)  Unfortunately for me, when I spoke to the VA and the medical service they use, they told me that since they had everything they needed, I didn’t need to keep the appointment.  Guess how that turned out.

Several months later, I received a letter stating my claim had been denied.  I called the VA, which then told me to file an appeal, which I did, using their new RAMP process.  Four more months went by until I finally spoke to someone at the VA who admitted to me that I’d been told the wrong things.  No kidding.  Additionally, he told me that my claim was denied not because of the lack of evidence but because I’d failed to attend the appointment that they’d told me not to go to.  You read that right.  It’s still mind-bending.  But wait, like a Ginsu knife commercial, there’s more!  He also told me that he’d submit a request on his end to have the claim withdrawn from the RAMP process and put back into the “reconsideration process.”  I didn’t hold my breath.

One month later, I called the VA and was told that hadn’t been done – it was still in RAMP.  The next month, I was told that I now had to write the letter and submit it.   Being a Marine who can follow orders, I did, but it wasn’t until the end of December and two more phone calls that someone at the VA – a supervisor – manually changed the status of my claim.  And it wasn’t until last month, January 2019, that I finally had the appointment that the VA initially told me to miss.  I’ve had additional tests, and I met with a VA-appointed physician, who told me that my claim should be assessed symptomatically, not based on the tests.  We’ll see about that, as a final determination on my supplemental claim to have a condition that they diagnosed in 2010 is now more than a year old and still yet to be resolved.

But I have to be honest, I’m not encouraged.  I’m friends with a very senior law enforcement officer who suffers from Gulf War Syndrome, uses a home nebulizer like I do, and often ends up in the hospital with pneumonia.  It started when this former Marine returned from Operation DESERT STORM.  The VA denied his claim because – and this is great – “You’ve been able to work for the past 20 years with it.”  He told me, “No kidding.  What else am I going to do?  Sit home?  I’m a man.   I have to work.”  But he’s paid a price financially and physically, and the VA hasn’t compensated him for it.

In the end, I volunteered to serve, enthusiastically so, and I knew the risks, just like every other service member who took the oath.  I just never thought that it would be this difficult to get the support I need from the government I served for 10 years as a Marine and now 9-plus years as a civilian.   And I consider myself fortunate – I followed the VA’s directions to the letter, yet their ineffective and broken system has had me jumping through bureaucratic hoops for more than year.  While I’m at least privileged to write my story in this column, there are 165,877 other stories out there like mine, veterans who are registered in the VA’s Airborne Hazards and Open Burn Pit Registry.   These are men and women who likely suffer worse than I do, who paid a price for stepping forward and answering the call to serve.  Who speaks for them?

Matthew Betley is a former Marine officer, a recovering alcoholic, and a political action thriller author of multiple novels from Simon & Schuster.  His latest thriller, RULES OF WAR, comes out July 2019.  Follow him on Twitter at @MatthewBetley or find him on Facebook.