Matt Barber
|
Posted: Jul 31, 2016 12:01 AM
Share   Tweet
The opinions expressed by columnists are their own and do not necessarily represent the views of Townhall.com. 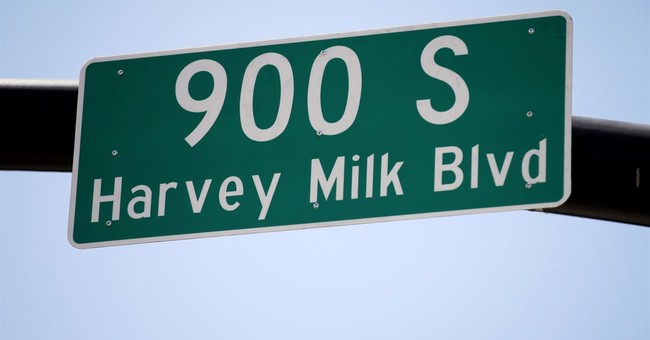 Attention on the poop deck. It seems our “first gay president” intends to “milk,” with pride, his fetish for all things “LGBT” in the closing months (mercifully) of his catastrophic presidency. USNI News (U.S. Naval Institute)reportsthat the Obama Navy presumes to ram, without consent, the most reprehensible aspects of the extremist homosexual political agenda down the throats of a divided American public.

“The Navy is set to name a ship after the gay rights icon and San Francisco politician Harvey Milk, according to a congressional notification obtained by USNI News.

An “oiler.” You can’t make this stuff up.

It remains unclear whether the USNS Harvey Milk will come equipped with sonar/radar or Grindr, be modeled after a Disney “cruise” liner and adorned with the American flag, or the rainbow colors of Sodom and Gomorrah.

What would you call a 33-year-old man who both had, and axiomatically acted upon, a deviant sexual appetite for underage, drug-addicted, runaway boys?

No, not Jerry Sandusky, but good guess.

What would you call a man of whom, as regards sexual preference, his own close friend and biographer confessed, “Harvey always had a penchant for young waifs with substance abuse problems”?

In a 2013interviewwith OneNewsNow.com, I called this man “demonstrably, categorically an evil man based on his [statutory] rape of teenage boys.”

But you can call him Harvey Milk.

Harvey Milk’s only claim to fame is that he was the first openly homosexual candidate to be elected to public office (San Francisco city commissioner). His chief cause was to do away with the Judeo-Christian sexual ethic. In 1978 Milk was murdered over a non-related political dispute by fellow Democrat Dan White.

And a “progressive” martyr was born.

Harvey Milk was both a pederast and, by extension, a statutory rapist. One of Milk’s victims was a 16-year-old runaway from Maryland named Jack Galen McKinley. Motivated by an apparent quid pro quo of prurience, Milk plucked McKinley from the streets.

Randy Shilts was a San Francisco Chronicle reporter and close friend to Harvey Milk. Though Shilts died of AIDS in 1994, he remains, even today, one of the most beloved journalists in the “LGBT” community.

Shilts was also Harvey Milk’s biographer. In his glowing book “The Mayor of Castro Street,” he wrote of Milk’s “relationship” with the McKinley boy: “… Sixteen-year-old McKinley was looking for some kind of father figure. … At 33, Milk was launching a new life, though he could hardly have imagined the unlikely direction toward which his new lover would pull him.”

In a sane world, of course, the only direction his “new lover” should have pulled him was toward San Quentin. But, alas, today’s America is anything but sane.

Whereas McKinley, a disturbed runaway boy, desperately sought a “father figure” to provide empathy, compassion, wisdom and direction, he instead found Harvey Milk: a promiscuous sexual predator who found, in McKinley, an opportunity to satisfy a perverse lust for underage flesh.

Another teen who crossed paths with Harvey Milk was Christian convert and former homosexual Gerard Dols. In a 2008 radio interview with Concerned Women for America, Dols shared of how – as a physically disabled teen – the “very nice” Harvey Milk had encouraged him in 1977 to run away from his Minnesota home and come to San Francisco.

According to Dols, Milk told him, “Don’t tell your parents,” and later sent him a letter with instructions. Thankfully, the letter was intercepted by Dols’ parents, who then filed a complaint with the Minnesota attorney general’s office.

The incident was swept under the rug.

Milk was also reputed to offer room and board in his San Francisco flat to young sailors in exchange for sodomy. His history of child sexual abuse was (and is) no secret to Obama or the homosexual community.

Peter Sprigg of the Family Research Council penned adetailed exposeon Milk in 2009. “He continued to engage in homosexual conduct while serving in the U. S. Navy,” wrote Sprigg. “Shilts reports that Milk, who had his own apartment off base, would pick up hitchhiking sailors by offering them a bed to sleep in. ‘The guests often would not know that Milk’s apartment had only one bed until they walked in the door.’

“Milk later exploited his time in the Navy during his political career – by lying about it, claiming falsely that he had received a dishonorable discharge for his homosexuality. Milk ‘knew the story would make good copy,’ according to Shilts. ‘Maybe people will read it, feel sorry for me and then vote for me,’ Milk told one campaign manager.

“The information Shilts provides about Milk’s sexual partners is revealing about the nature of male homosexual life in America,” concluded Sprigg. “Milk’s first long-term lover, Joe, had his ‘introduction to gay life’ when he performed sex acts upon men in a movie theatre for money – at age 9. Milk’s next lover, Craig, had been arrested after having sex with a 40-year-old man – when Craig was 14. He met Milk when he was 17. ‘[I]t would be to such boyish-looking men in their late teens and early 20s that Milk would be attracted for the rest of his life,’ Shilts reports. Another lover, Jack, moved in with Milk when he was 16 and Milk was 33. Jack attempted suicide several times, and once when he physically attacked Milk, ‘Harvey literally tied him up and threw him in a closet,'” reports Shilts.

So what does a man like Harvey Milk get for his crimes and predatory predilections? While most sexual predators get time in prison and a dishonorable mention on the registry of sex offenders, Harvey Milk got his own California state holiday (“Harvey Milk Day”), officialU.S. postage stamp, aposthumous Presidential Medal of Freedomand, now, is honored with a U.S. Naval ship in his own name.

This shameful “honor” bestowed upon a child molester is a slap in the face of every man and woman who ever served, fought or died for this great nation in decline. If you’re as disgusted by it as I am, pleasecontact your congressional representativeand demand they torpedo this predatory ship of fools.