Myth of the ‘Moderate Muslim’

Matt Barber
|
Posted: Jan 03, 2016 12:01 AM
Share   Tweet
The opinions expressed by columnists are their own and do not necessarily represent the views of Townhall.com. 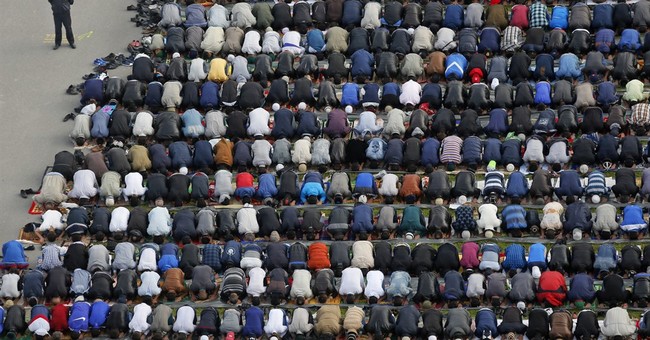 “When the sacred months are over slay the idolaters wherever you find them. Arrest them, besiege them, and lie in ambush everywhere for them.”

When it comes to the global scourge of orthodox Islam, the Western world, which Islamists expressly seek to “destroy from within,” is an upside-down realm wherein objective facts, logic and reason must yield to multiculturalist make-believe, “progressive” propaganda and political correctness run amok. Faithful Muslims want to kill you, and faithless progressives seem all too happy to help them along. Look at the ongoing Muslim invasion of Europe. This progressive paradise, a burgeoning multicultural dystopia, is beginning to look an awful lot like hell on earth.

Fact: Islam is about control. The word itself means “submission.” It is a socio-political pseudo-religion based upon the incoherent scribblings of one man – the “prophet” Muhammad, a warring tyrant who, as even the Quran concedes, was a murderous misogynist and pedophile. This unholy book is loosely plagiarized from the Bible’s Old and New Testaments – Scriptures that, by contrast, were seamlessly transcribed over centuries by roughly 40 men under the direct and divine inspiration of the Holy Spirit.

Muhammad taught, and the Quran stresses, that a central tenet of Islam is to convert, enslave or kill the infidel. An infidel is anyone who is not Muslim or, depending on who’s doing the killing, belongs to a different sect of Islam. Those who fall into that elusive, perpetually mute category tagged “moderate Muslim” are also infidels. They’re bad Muslims and so, according to the Quran, not Muslims at all.

To be sure, “moderate Muslim” is a contradiction in terms. It is intrinsically oxymoronic. Whereas “moderate” (read: liberal) “Christians,” such as those belonging to the PCUSA, embrace certain apostasies that run directly counter to the biblical teachings of Christianity (e.g., the pagan embrace of homosexual sin and child sacrifice by way of abortion), “moderate Muslims” likewise embrace an apostate version of Islam that runs directly counter to the clear teachings of the Quran.

While devout followers of Jesus Christ, who is Life – God incarnate – are, like He, characteristically peaceful; devout followers of Muhammad, the dead, child-raping, woman-beheading founder of Islam – demon incarnate – are, like he, characteristically violent. Whereas “Muslim extremists,” that is, faithful Muslims, kill people extremely; “Christian extremists,” that is, faithful Christians, love people, including their enemies, extremely.

Islam explicitly requires a worldwide caliphate (global domination and the violent imposition of Islamic Shariah law). This fact is not open for serious debate and is available for all to read, hear, see and, tragically, experience. Islam, therefore, is inherently at odds with freedom, democracy and the United States Constitution. While devout followers of Muhammad readily admit this reality, the suicidal left yet remains hell-bent, head in the sand, on “tolerating” itself, and the rest of us, to death.

According to the Islamic watchdog group TheReligionofPeace.com – a fantastic resource for the unfiltered facts on Islam – “The Quran contains at least 109 verses that call Muslims to war with nonbelievers for the sake of Islamic rule.” The aim of these verses is to dehumanize all non-Muslims, making it easier for Muslims of every stripe to slaughter them with impunity when the time is right. In addition to Surah 9:5, cited above, here are but a handful of Muhammad’s bloody calls to arms:

From the Hadith (sayings of Muhammad):

“But the Bible says to kill unbelievers too!” cry the Muslim apologists. Nonsense. “Unlike nearly all of the Old Testament verses of violence,” observes ReligionOfPeace.com, “the verses of violence in the Quran are mostly open-ended, meaning that they are not restrained by the historical context of the surrounding text.” (Christian theologian Dr. Michael Brown has penned a brilliant contrast/comparison between the Quran and the Old Testament, which thoroughly debunks manipulative false equivalencies often drawn by those who wish to sow confusion.)

Still, we need only look to the many polls to affirm the alarmingly high percentages of Muslims (hundreds-of-millions in number) who seek, through the most violent means imaginable, Islamic world domination. Again, here are but a few:

Bigfoot, the Loch Ness monster and the moderate Muslim: Even as we hear of the occasional sighting, most reasonable people remain skeptical as to whether, in reality, these mysterious creatures even exist.