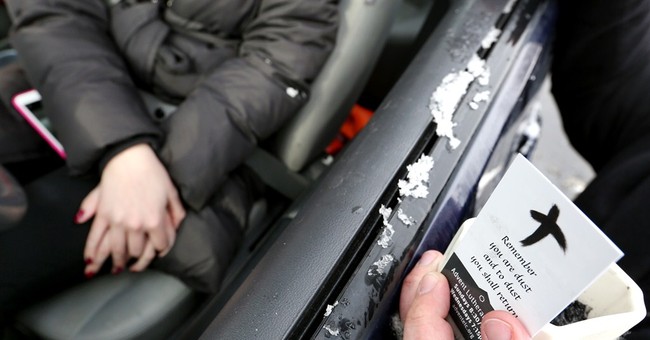 In 2007, and with that same nauseating arrogance that has come to define him, then presidential candidate Barack Obama duplicitously quipped, “I am absolutely convinced that culture wars are just so ’90s. Their days are growing dark.”

Dark, indeed. America’s soon-to-be cultural-Marxist-in-chief would then spend the greater part of a decade waging war against our nation’s Judeo-Christian culture and heritage at levels, and in ways, unseen in our storied history. Today, his anti-Christian crusade continues unabated. In fact, and with less than two years left to complete his baleful conspiracy, this neo-pagan extremist has begun to rapidly accelerate his unravelings.

Chief among his targets for destruction are conservative and Christian organizations and individuals who pose a threat to his envisaged “fundamental transformation” of our once-Judeo-Christian nation. The Obama vision? A godless, Euro-socialist dystopia crafted in his own secular-humanist self-image.

We’re well on our way.

Still, even the president of the United States, alone, cannot destroy an entire nation from within. His sinister (yes, sinister) objective of a Christ-less society (Jesus is the real target here) is shared by many who, like Obama, labor under the darkest of spiritual deceptions.

To accomplish the larger “progressive” dream of unmaking America, this man, this cagey figure of whom we still know very little, finds himself flanked by powerful comrades in arms – by hundreds of equally extremist and very well-funded anti-Christian groups.

That’s why I was so encouraged this week to see one of America’s largest and most effective mainstream Christian organizations fighting back. The Mississippi-based American Family Association (AFA) has developed and released a tremendous resource for the fair-minded American public. It’s an interactive “Anti-Christian bigotry map,” which identifies “more than 200 groups and organizations that openly display bigotry toward the Christian faith.”

The AFA has also announced that it will be monitoring these anti-Christian segregationists’ activities, reporting on those activities to the general public and further warning the tens of millions of Christian Americans of specifics relative to their radical campaign of religious cleansing.

“The website www.afa.net/bigotrymap includes an interactive map that identifies groups whose actions are deeply intolerant of the Christian religion,” notes AFA. “Their actions, for example, have endorsed efforts to silence Christians and to remove all public displays of Christian heritage and faith in America.”

Among the over 200 anti-Christian organizations exposed by the Christian watchdog group are some of the most strident atheist, humanist and “LGBT” extremist outfits in America. The ironically named Human Rights Campaign (HRC), for example, is listed among them. The HRC’s co-founder is accused homosexual pedophile Terry Bean. He was arrested a few months ago for allegedly raping a 15-year-old boy.

Another of the more high-profile groups listed is the hard-left Southern Poverty Law Center (SPLC). The SPLC’s propagandist activities have been linked by the FBI to anti-Christian domestic terrorism (something I long ago predicted would happen).

Also on the list are the Freedom From Religion Foundation, the Gay, Lesbian & Straight Education Network (GLSEN) and many more.

“A common practice of these groups is threatening our nation’s schools, cities and states,” said AFA President Tim Wildmon.

“By threat of lawsuit, they demand that prayer be removed from schools and city council meetings, that Ten Commandments monuments be stricken from courthouses, and that memorial crosses be purged from cemeteries and parks,” he added.

“Families and businesses that express a Christian worldview on social issues often face vicious retaliation from anti-Christian zealots, and it’s time to call them out for their intolerance,” urged Wildmon. “Because of anti-Christian bigotry private business owners have been sued and forced to close their businesses.”

AFA is warning Christian Americans to be vigilant in that some associated with the 200-plus anti-Christian groups have actually “committed violent crimes against Christians and faith-based groups,” and that “physical and profane verbal assaults against Christians” have been, and continue to be, regularly used as “angry methods of intimidation.”

In 2012, for instance, SPLC supporter and homosexual activist Floyd Lee Corkins entered the Washington, D.C., headquarters of another of America’s largest mainstream Christians organizations, the Family Research Council (FRC), armed with a gun and a backpack full of ammunition. He also had 15 Chick-fil-A sandwiches he intended to smear in the faces of FRC employees after he slaughtered them all (FRC had recently defended the food chain’s COO, Dan Cathy, for pro-natural marriage statements).

Thankfully, Corkins’ designs on mass murder were thwarted by FRC facilities manager and security specialist Leo Johnson. As Corkins shouted disapproval for FRC’s “politics,” he shot Johnson who, despite a severely wounded arm, managed to tackle Corkins and disarm him. (Of course, this is all impossible as it’s illegal in Washington, D.C., to carry a concealed weapon.)

Court documents and FBI evidence later revealed, as many had suspected, that the SPLC was, while indirectly so, at least to some degree complicit in this particular act of anti-Christian terrorism. Corkins had used, and confessed to having been incited by, the SPLC’s anti-Christian propaganda.

Thankfully, the SPLC, the HRC and hundreds more of these anti-Christian organizations are now being called out and held accountable. Understandably, they’ve begun scrambling for damage control. They’re on the defensive.

And yet they continue to defend the indefensible.