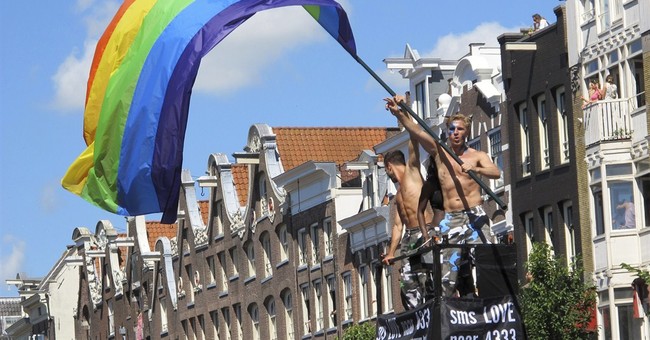 The homofascist rainbow-shirts are at it again. They’ve unsheathed, once more, their anti-Christian long knives.

Back in April, I wrote the following in a column headlined “Religious freedom and ‘gay marriage’ cannot coexist”: “‘Gay pride’ necessitates anti-Christian hate. It must. ‘Gay marriage’ and other ‘sexual orientation’-based laws do violence to freedom and truth. They are the hammer with which the postmodern left intends to bludgeon bloody religious liberty and the Judeo-Christian sexual ethic.”

Liberals are anything if not predictable.

Chai Feldblum, President Obama’s EEOC commissioner – a lesbian activist who supports “plural marriage” – has called the clash between religious liberty and unfettered sexual license a “zero-sum game,” meaning that someone wins and someone loses.

Guess who loses in Feldblum’s book? She has “a hard time coming up with any case in which religious liberty should win” and candidly admits that liberals “want to revolutionize societal norms.” She believes that “gay sex is a moral good.”

Here’s the latest example of Feldblum’s words in action. The Oregonian reports: “A same-sex couple who requested a cake for their wedding in January but were refused service by a Gresham bakery have filed a complaint with the state, alleging Sweet Cakes by Melissa discriminated against them based on their sexual orientation.

“Oregon’s Bureau of Labor and Industries’ civil rights division will investigate to determine if the business violated the Oregon Equality Act of 2007, which protects the rights of gays, lesbians, bisexual and transgender people in employment, housing and public accommodations. …

“Rachel N. Cryer, 30, said she had gone to the Gresham bakery on Jan. 17 for a scheduled appointment to order a wedding cake. She met with the owner, Aaron Klein.

“Klein asked for the date of the wedding and names of the bride and groom, Cryer said.

“‘I told him, “There are two brides and our names are Rachel and Laurel,”‘ according to her complaint.

“Klein responded that his business does not provide its services for same-sex weddings, she said.

“‘Respondent cited a religious belief for its refusal to make cakes for same-sex couples planning to marry,’ the complaint says. …”

“‘We are committed to a fair and thorough investigation to determine whether there’s substantial evidence of unlawful discrimination,’ said Labor Commissioner Brad Avakian. …”

Mr. Avakian then revealed what he views as a “fair and thorough investigation”: “Everybody is entitled to their own beliefs, but that doesn’t mean that folks have the right to discriminate,” he said.

Here’s the kicker. Read it closely:

“‘The goal is never to shut down a business. The goal is to rehabilitate,’ Avakian said. ‘For those who do violate the law, we want them to learn from that experience and have a good, successful business in Oregon.’”

Get the not-so-thinly-veiled threat? Christians have a right to own a “successful business” in Oregon, so long as they don’t, well, be Christian – so long as they shelve their faith and submit to our ever-”progressive” government’s anti-Christian demands. “The goal is never to shut down a business,” but either you abandon the Judeo-Christian sexual ethic and dutifully observe postmodern sexual relativism, or government will shut you down in a Sodom and Gomorrah minute.

Brad, Rachel, Laurel and the rest of you left-wing bullies need to get this straight (so to speak): The godless left has been trying to “rehabilitate” Christians for over 2,000 years. We haven’t caved yet. What makes you think we will now? Those of us who wish to remain obedient to God will not – indeed, cannot – accommodate you and play along with your sin-centric “gay marriage” delusion.

Look, you have every right to dress up in two wedding gowns or two tuxedos, get pretend “married” and play house to your hearts’ content. You do not have the right, however, to force others to abandon their sincerely held religious beliefs, thousands of years of history and the immutable reality of human biology to engage your little fantasy. No amount of hand-wringing, gnashing of teeth, suing Christians or filing charges against those of us who live in marriage reality will make us recognize your silly so-called “marriage equality.”

Rather than trying to compel these Christians to participate in their counter-Christian mock marriage, all Ms. Rachel and Ms. Laurel had to do was take their business down the street. There are, no doubt, many bakers who share their worldly sexual morals (or lack thereof).

Imagine if a Christian came into a “gay”-owned bakery and demanded a cake with these words: “Homosexual behavior is shameful: Romans 1:27.” Think the left would be clamoring for charges against the baker if he refused? Me neither. In fact, I’d be the first to defend his right to “discriminate” against the Christian.

Or what if some anti-gun nut printing service refused to produce flyers for an NRA rally? Shouldn’t they have that right?

Or if some hippy bed and breakfast owner refused to host a conference challenging global warming alarmism. Shouldn’t he have the right to operate his business in accordance with his sincerely held beliefs?

Of course he should.

And so should Christians.

But … But … discrimination! “Homophobia”!

Seriously, lefties, give it a rest. So-called “sexual orientation” laws are nothing like laws prohibiting racial, age, disability or gender discrimination. Those qualities are based on neutral, immutable characteristics. Even liberals admit that “sexual orientation” is based on “fluid” feelings and behaviors. It’s about what you do, not who you are. It’s about what you believe and who you choose to have sex with, not the color of your skin.

Ken Hutcherson, an influential black pastor from the Seattle area, put it well: “It has been said loudly and proudly that gay marriage is a civil rights issue. If that’s the case, then gays would be the new African-Americans. I’m here to tell you now, and hopefully for the last time, that the gay community is not the new African-American community.

“Don’t compare your sin to my skin!” he demands.

Today’s liberals seek to “rehabilitate” Christians to their way of thinking under penalty of law. Liberals of old just threw us to the lions.

I guess that’s what they mean by “progress.”