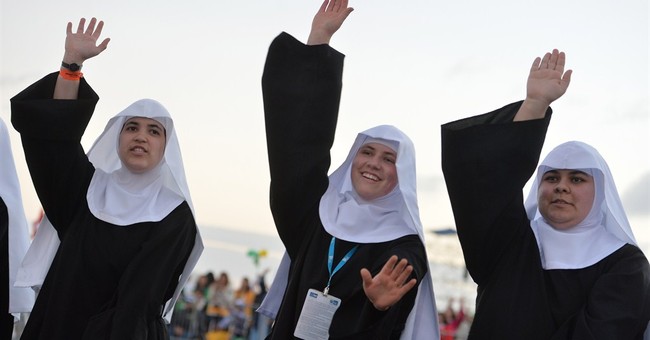 Anti-Christian extremist groups like the ACLU, the Freedom From Religion Foundation and People for the American Way hate God.

These “progressive” outfits – along with like-minded politicos, judges, Hollywood elitists and left-wing media-types – hate that this great nation was expressly founded upon the bedrock precepts of the Judeo-Christian tradition.

And so, in response, they lash out. They endeavor first to raze our God-blessed America, and then raise, from the rubble, a godless America fashioned in their own secular-socialist self-image.

Even the ACLU’s own promotional materials overtly advocate unconstitutional religious discrimination: “The message of the Establishment Clause [to the U.S. Constitution] is that religious activities must be treated differently from other activities to ensure against governmental support for religion,” they claim.

As you’re about to see, this is abject nonsense – a twisted constitutional misrepresentation as detached from reality as the east is from the west. Secular-”progressivism” depends upon deception as much as it relies upon revisionism.

To know the hearts, minds and collective will of our Founding Fathers and American pioneers, one need only look to what they wrote in their respective state constitutions. Most will be amazed to learn that all 50 state constitutions explicitly and unequivocally thank God for his benevolence and acknowledge that we as a nation are dependent upon Him – that He is the sole source of our freedoms. This is true, not just for the “red states,” but for the bluest of the blue. (See what your state constitution says about God).

Let’s start with the most liberal state in the Union: Massachusetts.

We, therefore, the people of Massachusetts, acknowledging, with grateful hearts, the goodness of the great Legislator of the universe, in affording us, in the course of His providence … and devoutly imploring His direction in so interesting a design, do agree upon, ordain and establish the following … Constitution of the Commonwealth of Massachusetts.

It is the right as well as the duty of all men in society, publicly, and at stated seasons to worship the Supreme Being, the great Creator and Preserver of the universe. And no subject shall be hurt, molested, or restrained, in his person, liberty, or estate, for worshipping God in the manner and season most agreeable to the dictates of his own conscience;

Whereas our wise and pious ancestors, so early as the year one thousand six hundred and thirty-six, laid the foundation of Harvard College, in which university many persons of great eminence have, by the blessing of God, been initiated in those arts and sciences, which qualified them for public employments, both in church and state: and whereas the encouragement of arts and sciences, and all good literature, tends to the honor of God, the advantage of the Christian religion, and the great benefit of this and the other United States of America …

So much for “separation of church and state.” Did you hear that hollow popping sound? Somewhere in Boston an ACLU attorney’s head just exploded.

Or how about our secularist-in-chief’s home state of Illinois?

We, the People of the State of California, grateful to Almighty God for our freedom, in order to secure and perpetuate its blessings, do establish this Constitution.

We The People of the State of New York, grateful to Almighty God for our Freedom, in order to secure its blessings, DO ESTABLISH THIS CONSTITUTION.

You get the point. Based upon the unfounded assertions and fact-free yearnings of the ACLU and other liberal separatists, the state constitutions of all 50 states are, well, unconstitutional.

But what about the U.S. Constitution? Doesn’t it at least require church-state separation?

No, not in the way “progressives” imagine it does. In fact, contrary to popular opinion, the words “separation of church and state” are found nowhere in the U.S. Constitution.

So why all the confusion?

It’s by design. The confusion has been intentionally fomented. It’s the byproduct of a decades-long religious cleansing campaign. The First Amendment’s Establishment Clause – a mere 10 words – is the primary tool the left misuses and abuses to accomplish its insurgency. Yet it remains abundantly clear in both scope and meaning. The Establishment Clause merely states: “Congress shall make no law respecting an establishment of religion. …”

Let’s break it down. What do you suppose the framers of the U.S. Constitution – a document specifically designed to limit the powers of federal government – intended with the word “Congress”? Did they mean state government, municipal government, your local school board or third-grade teacher?

Of course not. They meant exactly what they said: Congress – as in the United States Congress.

Now what did they mean by “… shall make no law respecting an establishment of religion?”

Well, in a letter to Benjamin Rush, a fellow-signer of the Declaration of Independence, Thomas Jefferson – often touted by the left as the great church-state separationist – answered this question. The First Amendment’s Establishment Clause was simply intended to restrict Congress from affirmatively “establishing,” through federal legislation, a national Christian denomination (similar to the Anglican Church of England).

As Jefferson put it: “[T]he clause of the Constitution” covering “freedom of religion” was intended to necessarily preclude “an establishment of a particular form of Christianity through the United States.”

The individual states, however, faced no such restriction.

In fact, until as late as1877 – and after religious free exercise became absolute with passage of the Fourteenth Amendment – most states did have an official state form of Christianity. Massachusetts, for example, sanctioned the Congregational Church until 1833.

Then religious tolerance was unchained in the Bay State: “[A]ll religious sects and denominations, demeaning themselves peaceably, and as good citizens of the commonwealth, shall be equally under the protection of the law; and no subordination of any one sect or denomination to another shall ever be established by law.”

That is, quite simply, what church-state separation entails. The state must not “prohibit the free exercise” of any religion by “establishing a particular form of Christianity” or through imposing a religious litmus test to hold public office.

In short, the ACLU and other like-minded “progressives” are liars.