Culture of Death and the Batman Shooting 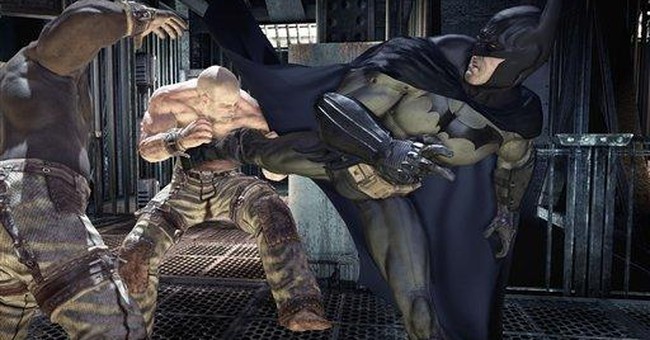 Clearly, what our nation needs is more “separation of church and state.” If those obnoxious, right-wing Bible thumpers would simply quit bellowing about the need for revival – a return to the deeply held Judeo-Christian principles embraced by our Founding Fathers – America would be a much better place.

Secular-humanism – that’s the ticket! We need more reliance on man and less on God.

At the time of this writing, I’m sitting just a few miles from a Century 16 theatre in Aurora, Colo., where, in the early morning hours of July 20, 2012, a deranged, fame-starved gunman shot dead at least 12 innocent people and wounded scores more at a midnight showing of “The Dark Knight Rises,” a Batman sequel.

One of the victims killed was a 6-year-old child. I won’t even share the gutless dirt bag’s name because that’s exactly what he wants.

I had an entirely different column prepared for this week, but, in light of this horrific event, its subject matter seemed trivial and inappropriate.

Like most decent Americans, I am sickened today – mournful in a way words cannot describe. Please join me in the coming hours, days and weeks in, yes, praying for the victims, their families and the state of our lost union.

It’s times like this when we’re reminded that, when the smoke clears, we’re left with our relationships alone: family, friends, prayer and, most importantly, a deep, childlike need for God’s love, mercy and comfort.

Still, we shouldn’t be surprised by this mass murder. In fact, if we’re honest, we’re not surprised. We’ve become almost numb to such reports – desensitized to what only a few short decades ago would have been unimaginable. Although no one is to blame for this man’s objectively evil actions but he alone, those actions are, sadly, a dreadful sign of our desperate times.

Today, children are reared in a culture that glorifies – even worships – death and violence. But brutal crimes such as this are not the cause of our culture of death; they are merely a symptom.

In an opinion piece penned for the Telegraph in 2008, columnist Jenny McCartney used a prior Batman movie, “The Dark Knight,” to illustrate, in a cursory way, our rising death-culture problem. In many ways her words were eerily prophetic and sickly ironic.

“But the greatest surprise of all – even for me, after eight years spent working as a film critic,” she wrote, “has been the sustained level of intensely sadistic brutality throughout the film.”

McCartney went on to describe, in gory detail, the movie’s severely violent opening scene, lamenting that millions of parents would choose to expose their children to it. She concluded by chastising Hollywood for its complicity in an increasingly violent youth culture.

“Even since 2002, the public’s willingness to expose children to previously unthinkable levels of screen violence has soared,” she noted. “The poet WB Yeats once wrote, ‘In dreams begins responsibility,’ yet Hollywood will never take responsibility for its most brutal dreams so long as the paying public still flocks to the theatre of cruelty.”

I think McCartney was on to something but believe there’s plenty more responsibility to go around. I submit that our culture of death derives from somewhere far beyond just Hollywood. The “theatre of cruelty” spans from sea to shining sea.

Just one example, though a big one, is America’s ongoing capitulation to the horrific abortion violence carried out under cover of manmade law each day – an equally evil phenomenon.

Beneath the euphemistic banner of “reproductive choice,” hundreds of women elect to have their own babies slaughtered in the womb daily. Children – those who dodged the abortion bullet anyway – aren’t stupid; they’re just young. From this, they can only deduce that, according to our culture, human life is cheap and meaningless.

So why are we surprised when people like the “Batman killer” act accordingly?

Indeed, in our perverse society, a woman exercising her “right to choose” death for her innocent child represents “courage,” while the Batman shooter’s “choice” to kill innocent moviegoers represents cowardice. And it is. They are both acts of cowardice. The only relevant difference is the victims’ age.

But again, like the Batman murders, our nation’s 55-plus million abortion murders post Roe v. Wade are not the cause of our culture of death; they are merely a symptom. Ultimately, the cause stems from something much less complicated.

We as a nation – as a people – have turned our backs on God. We have rebelled against Him and have forgotten that it was He and He alone who gave us 200-plus years of prosperity, unprecedented in world history.

We have left Him, so why are we surprised He’s leaving us? We have said, “We don’t need you, leave us alone.”

And so He has.

Recently, Secretary of Agriculture Thomas Vilsack acknowledged at a White House briefing that he’s been praying for rain to alleviate the widespread drought plaguing our nation. “I get on my knees every day,” he admitted. “And I’m saying an extra prayer now.”

Predictably, godless “progressives” are up in arms over his statement. Tom Flynn, executive director of the Council for Secular Humanism, quickly pounced, saying that Vilsack’s mere mention of prayer “sends the wrong message to distraught farmers.”

“[Praying] for rain? That’s not just government entangling itself with religion, that’s government publicly practicing it, and wallowing in superstition,” he said.

In the coming days and weeks, politicians, entertainers, media-types – public figures of every stripe – will call for prayer in response to the Batman shootings. But don’t expect to hear much from the aforementioned godless “progressives.” They generally know when to shut up.

For any real national healing to occur – in order to un-ring the culture-of-death bell – we must collectively surrender. We must recommit ourselves as “one nation, under God,” to the underlying culture of life that such a commitment presupposes.

2 Chronicles 7:14 gives us hope: “Then if my people who are called by my name will humble themselves and pray and seek my face and turn from their wicked ways, I will hear from heaven and will forgive their sins and restore their land.”

Indeed, the restoration of our land begins with you and me.

It ends with Him.

White House Looks to Be Planning for 'Wave of Infection,' Just in Time for Midterms, Advises Indoor Masking
Townhall
Lib 'polling/targeting expert' gets a lesson on why couples go to the grocery store together
Twitchy
WSJ Editors Eviscerate Hillary, Lapdog Media in Blistering Op-Ed About Russia Collusion Lies
Redstate
‘Somebody Saved Me:’ Is Pete Townshend's New Audio Book Worth a Listen?
PJ Media